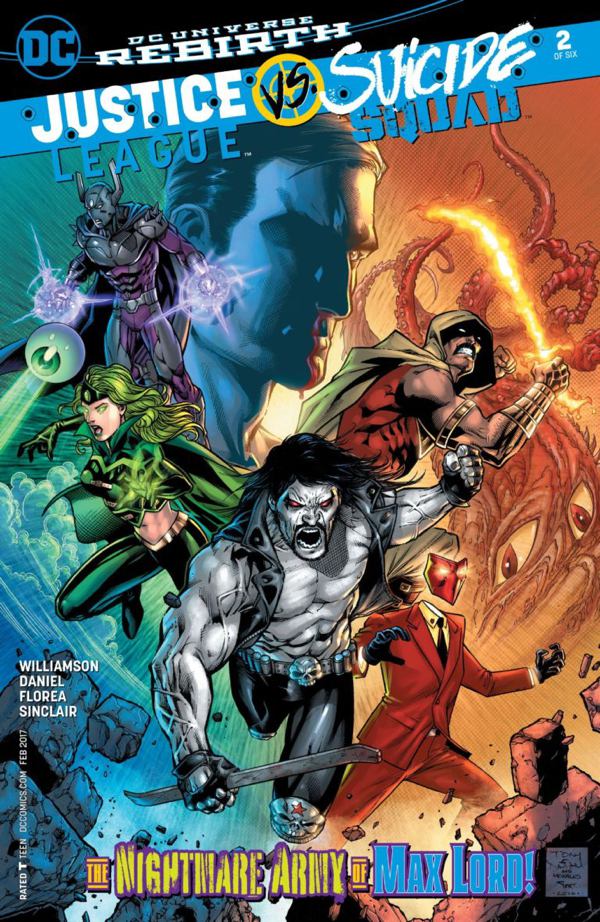 The Versus match ups of the century come right under the wire as we prep for next year, in the second installment of the League vs. the Squad (vs. the Nightmare Army of Maxwell Lord so says the cover, but we’re not quite there yet)

This issue is mostly dedicated to the execution and expanding of specific fights between the two teams. While the victor is very unexpected and strengthens some reasoning seen in issue #1 the issue is light on any major momentum push for the plot at large save for the final page. Williamson has a handle on the rather huge cast of heroes and villains and newer players that broke out of prison with Maxwell Lord’s help. This issue is about the action with character interactions for good measure, the Nightmare Army do give us some interesting details about the scope and connections to wider DCU Rebirth plot lines. They’re still widely disconnected from the ongoing island battle but, the slow moving pieces help ease the eventual payoff for the secrets within this crossover event.

The meat of the issue in the meantime are the wonderfully appropriate match up fights between the JL and SS. Williamson gives every one of the members on both teams a fair shake in the sunlight. He plays with modern misconceptions that comes with certain characters and adds to the work we’ve seen time and again with their extensive history. The dialogue is worth the price of admission for the lineups and they feature both simplistic and obvious wins, as it should. This is the Justice League we’re talking about, and while the Suicide Squad do keep up their level of evil snark and underhandedness to a T…most of the fights don’t work for them and a little wrinkle with a certain character that is displayed in issue #1 stops the show entirely. Suffice it to say, the character’s status will be elevated following this issue.

Daniel, Florea, and Sinclair all provide a serviceable time for the art. The action isn’t as large or grand across the board except for a few instances but it still works from allowing the comic to come off as non-kinetic images. The facial expressions of all of the cast are on point from: Flash’s triumphant smirk, Harley’s gleeful smile through the insanity of trying to evade Wonder Woman, and Killer Frost attempting to do what needs to be done under duress. The colors and background, and by that measure, citizens extreme worry caught in the crossfire are fitting for the island and Swiss Alps meeting of the minds while correct for everyone seem toned down and less bombastic than the opening chapter.

The second installment for the first major DCU Rebirth event since it’s inception completes the “Vs.” part of it’s name. The issue speeds through the obvious fighting and continues to lay seeds for surprising reveals down the line and pushes unlikely characters into the spotlight. While the issue is a fine next step for the crossover it’s light on moving things alone to get the immediate Hero vs. Villain fight out the way ensuing more deception and danger for the remaining four issues. Williamson has a tight grasp on character voices and motivations with a vision on including ties to the larger DCU, Daniel and the rest of the art team make the best of providing fun to the fighting throughout picking up the pieces where Fabok left off. All in all, Justice League vs. Suicide Squad #2 shifts gears to giving fans what they want and more hints to what we’ll be seeing sooner rather than later.