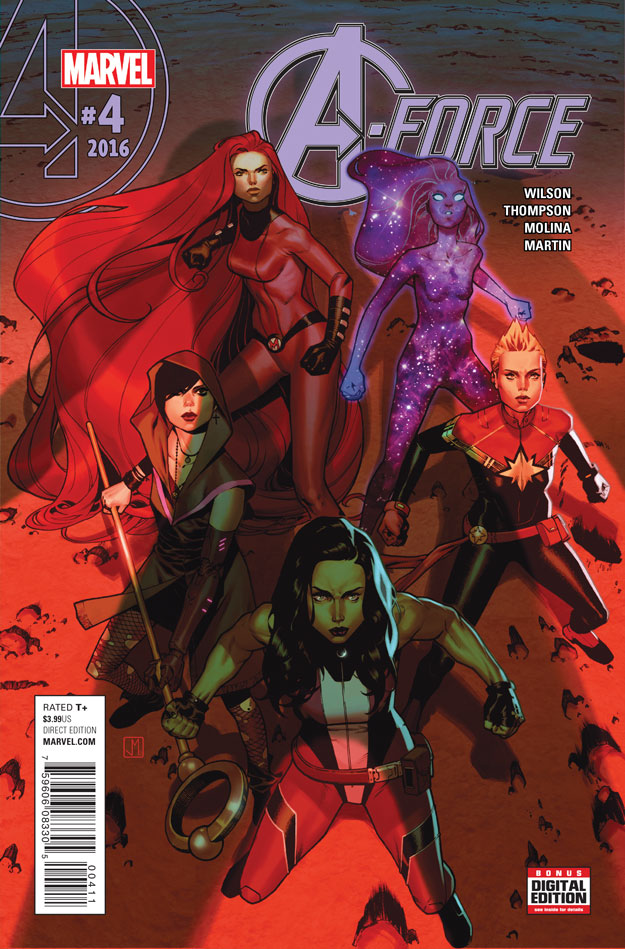 Maybe being around those who have weathered similar experiences would be a good path towards healing.

Reeling from the events of the last issue, A-Force pulls together a plan to take care of Antimatter with the hopes of also saving Singularity. In a nearly last ditch effort, the team pulls together their resources to save the day with a couple of surprising developments. After a few heart-to-hearts, the team is alerted to a new and growing threat as they resolve to band together for the future.

Going to be honest and say I needed this issue today. A-Force #4 was an excellent end to an arc and an emotionally relevant and impactful story. In the culmination of the first story for this team, there are a lot of significant interactions and developments. Dazzler reveals something intimate about herself to Jen, while Singularity references new events that may tie into the larger Marvel universe. The interplay between each of the characters was absolutely stellar and Jen delivers a line that ties into not only the experience and the bond of the team, but that is evocative and therapeutic to readers.

Kelly Thompson and G. Willow Wilson write these characters in a way that is sometimes atypical, but that fits the overall narrative of the A-Force series. In this issue in particular, the intimate bond between the characters take front and center, as each of their motivations is informed by how they feel about each other. Jen and Alison share an incredible moment as this final installment of the first arc winds down which seems to be a manifesto for the women of A-Force, whether spoken or not. Thompson and Wilson’s capacity for keeping core elements of the characters constant while conveying them in a fresh and witty style should not be overlooked.

The art of A-Force #4 feels much darker, matching the gravity of the situation coming off the heels of the previous chapter. Jorge Molina deftly employs perspective and form throughout the issue, moving beyond the borders of panels and crafting wonderfully dynamic scenes and poses. One single page spread in particular is beautiful and each of the characters take on a powerful presence as Jen calls the team into action. Laura Martin on colors enhances the tone of the story by using darkness and shadow to emphasize characters and how they move.

One absolutely stunning double page spread combines amazing technical elements, capitalizing on form, shape, and light. Martin supplies brilliant and explosive hues, casting an otherworldly sheen on Molina’s silhouettes, while Molina’s own work asserts itself against the brightness of this scene, capturing each dynamic figure with distinction. The synthesis of all of these elements is beautiful and an expression of Molina and Martin’s skill and integral presence in this series.

If you love relationships between Marvel women that center on compassion and support, you need to read A-Force #4. In this issue in particular, the creative team works together to highlight the connections that drive this series and that have connected these women for many years. This was an excellent end to the first story of this team that so many of us have waited for, and I am most assuredly excited for what’s in store.