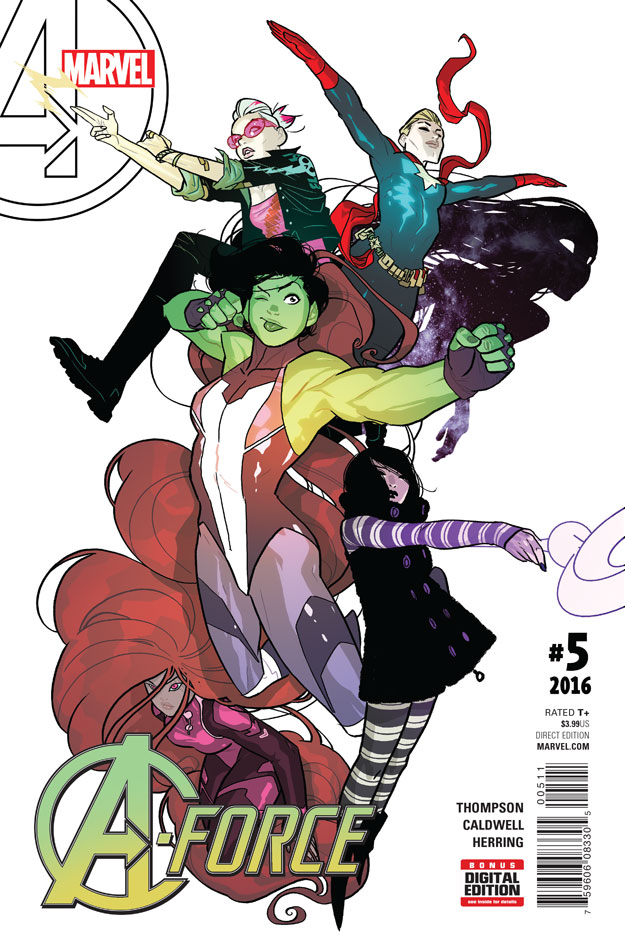 Coming out of the conflict with Antimatter, the team heads to Oregon to track one of Singularity’s anomalies. They meet a surprising remnant of Battleworld who reveals that the current threat isn’t as it seems. After a fight and a few beers, Alison reveals an unsettling truth to the team’s new compatriot before another member comes under the influence of a sinister force.

The changes to the creative team starting with issue #5 do not take away from how fun A-Force is as a series. Kelly Thompson holds the mantle of the series well without Wilson as a partner in crime, just as Ben Caldwell boldly and bravely carries the torch from Molina and Martin. I thoroughly enjoyed the character interactions, particularly between Nico and Alison, and the infusion of comedic, slice-of-life elements. Amidst a story of five women and an interstellar being fighting giant monsters, there is still time to enjoy all the ale a small town has to offer and for characters to reveal vital parts of themselves.

Kelly Thompson in A-Force #5 weaves a story that moves seamlessly through each scene. Thompson’s transitions feel effortless and allow the story to develop organically. Throughout the issue, droplets of witty humor make the story more enjoyable, whether delivered through interactions or one-liners. Thompson’s work dazzles in the characters’ relationships to each other. Nico and Alison are a wonderful and fun duo whose interactions bring important elements to the team, while Medusa and Jen interact in a way marked by lively sarcasm and excitement. Thompson’s writing is joyful and adventurous in this issue, which I think bodes well for what comes next.

With Molina gone, there are some large shoes to fill, but Ben Caldwell’s quirky style alters the tone of A-Force and heightens an already engaging story. Medusa’s body and costume change are excellent; she has a fuller figure and the new take on her costume is an innovative departure from her classic garb. Caldwell seems to put care in drawing each of the women on the team, giving them all a distinct style, appearance, and presence. I appreciate the amount of detail put into action scenes, as well as the creative use of perspective throughout the issue. Caldwell uses this technique to provide emphasis that beefs up action and movement or that makes emotional moments more profound.

Ian Herring is our new colorist, who excels at vibrant detail against relatively neutral and static backgrounds. The softness of the world around the characters makes them pop, and Herring employs a wide range of colors even within a more muted pallet. There’s one very small panel which I think marks Herring’s skill, as it highlights the magnitude of Alison’s revelation to DazzleThor. The shock on DazzleThor’s face and the closer perspective on Alison’s body are intensified by the island of pinks and purples against the calmer teal tones of the surrounding panels.

Starting with this issue, A-Force as a series feels like it’s going to develop a new personality and place among the rest of Marvel’s line. Thompson, Caldwell, and Herring shine, their work a wonderful synthesis of humor and artistic flair. Issue #5 was a great start to a new arc which gives me hope for the series as it moves forward.