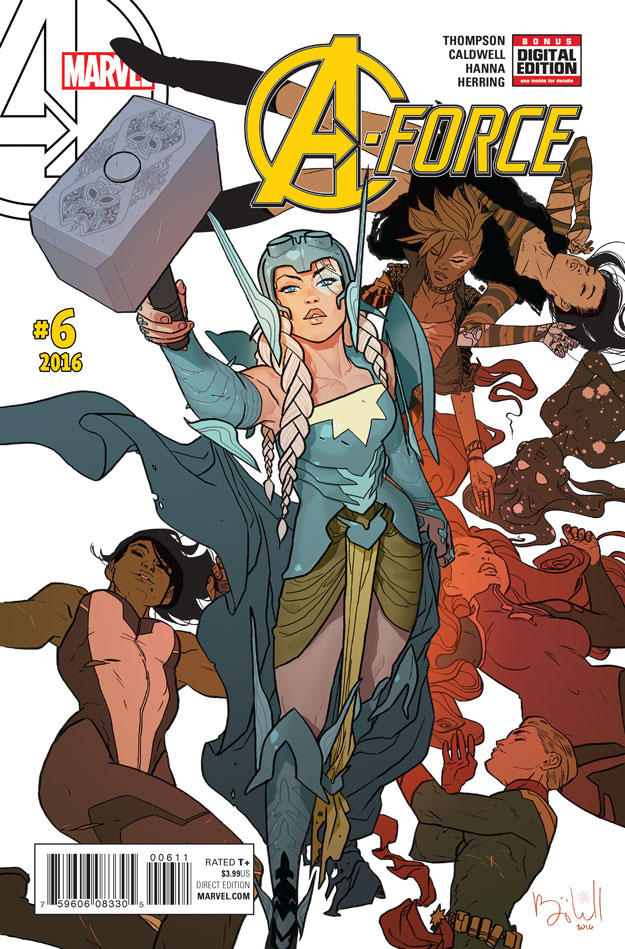 A-Force is amaze-balls. Thompson writes one hell of a team book and Caldwell sells the relationships of the teammates brilliantly in this fun read.

I’m not going to lie, A-Force right now has a stronger pull for me than any of the Avengers books, which is saying something from this long time Avengers reader. The relationships Thompson writes are brilliant, and the camaraderie leaps from the page of this issue. The team is in a sticky situation, and even with Medusa’s brilliantly caustic attitude, they do not fracture. The individual personalities are captured very well by Thompson, and I will freely admit that I appreciate her take on these characters much more than other comics I have read this week (*cough* Civil War II #1). As we prepare on one side of the Marvel Universe for a months long war between heroes, the tight bonds of this team shine like an amazing beacon.

The dialogue in this issue is what makes it soar. The plot is solid, but the interactions between the characters are Thompson’s strongest work. Every word in every balloon coming from Nico, Jennifer and Medusa are perfectly on point, and the humour balanced with drama is well achieved. Thompson has a great read on who these characters are and her voices for them are some of the best I’ve read in quite a long time.

Ben Caldwell drives this strong writing home with excellent visuals. The tone set by his pencil work and Ian Herring’s colours capture this team perfectly, elevating the script to new levels by adding layers of subtlety and depth in each image. The interactions between the characters have power because of Caldwell’s strong work, injecting a ton of emotion into the conversations between Jen & Nico. The body language of these characters speak volumes, with Medusa’s contempt for their situation radiating from the character, and Carol’s stalwart “push forward” attitude present in every panel. Ian Herring’s colour work is on point and enhances the best aspects of Caldwell’s pencils. The two are a strong battery and A-Force #6 is a damn good looking comic.

A-Force #6 is a bright spot in comics, executed well by skilled team. Thompson, Caldwell and Herring are carving a unique place for A-Force in the Marvel line and, I’m not going to lie, I want more of this in the Big Two landscape. There’s some very good storytelling with some compelling characters going on here, and I’m excited to see where Thompson and Caldwell take one of the best team books on the market.