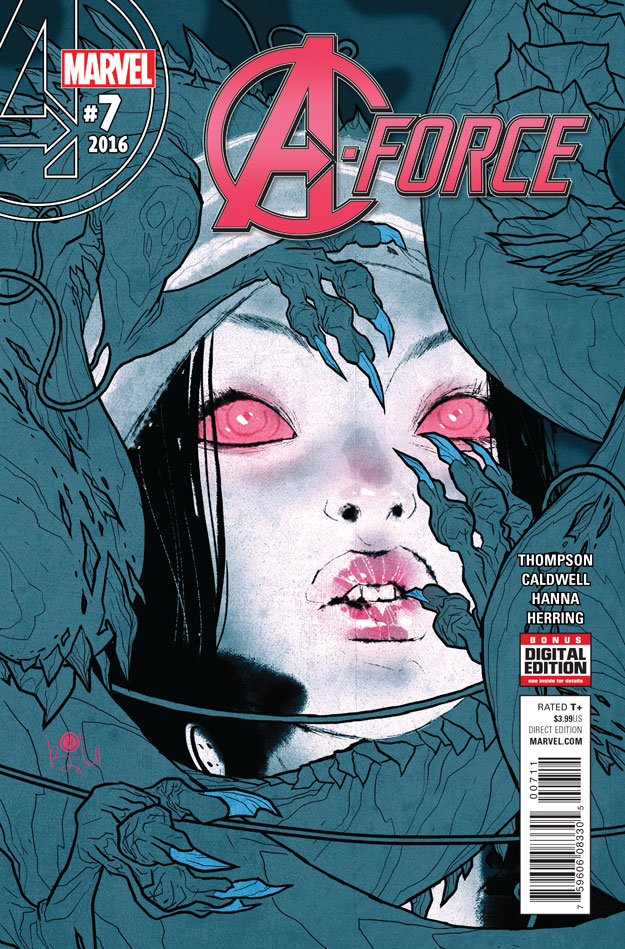 If anything best captures the colorful, incredible spirit of A-Force, it has to be the moment when the lyrics of Huey Lewis and the News become part of how the heroines wrap up their battle with Countess. Still, while there are plenty of comic moments in Issue #7, the heart and charm of the story shines through in the characters and their interactions.

She-Hulk’s commentary on battle strategy (and naming teams) conflicts with Medusa in ways which bring out the best in both characters while still showing that each is their own person and won’t always see eye to eye, all the time. But that is perhaps what makes A-Force so amusing and why, just seven issues in, the characters continue to remain one of the most engaging elements — hence explaining why and how Dazzler and Dazzler Thor carry the story in both terms of comedy and drama.

Without verging into spoilers, Thompson’s writing between the Thor Corps Dazzler and A-Force Dazzler is fantastic and moving. It is a great comic that can make you wish you had more of something right when the plot requires other things. Alas! Sadly, Countess is not allowed the same depth in this issue since she mainly serves as a fantastical foil; however, through the power of Minoru (with some help from Thompson guiding the plot) there are hints that what Countess as been introduced as is not what she will remain. Obviously, future issues of A-Force will be needed to explore this in more detail.

A-Force remains a solid comic that you need to read, if only because the spirit and writing is so very, very engaging and funny. While some aspects of the plot don’t run as deep into Marvel lore as, say, Civil War II, you’d have to be under a spell not to find something enjoyable and moving in this series. Issue #7 continues the trend of dynamite content, which is obviously a labor of love considering Thompson has now transitioned into the position as sole writer.

Caldwell’s art gets a workout in this issue since we get a great splash page as well as some wonderful examples of how strong She-Hulk can be when fighting enemies many, many, many times her size. The paneling continues to be largely and free-flowing, thus allowing the characters to move smoothly between them so as to enhance the action. Even better is the fact that Caldwell gets to push the expressive features of the characters during some fantastic moments. While this reviewer thinks that perhaps the best expressions are saved for She-Hulk, Caldwell’s energy and talent bring every page to life.

Obviously complementing the designs are the colors of Ian Herring. A-Force’s colors really deserve to be re-examined and appreciated after you have read the comic because this series is a master class in how tones and shading, in tandem with a team who understands what a comics best qualities are, “make” the characters and the feel of the book.

Great stuff from everyone aboard the A-Force train who continue to knock everything out of the park.