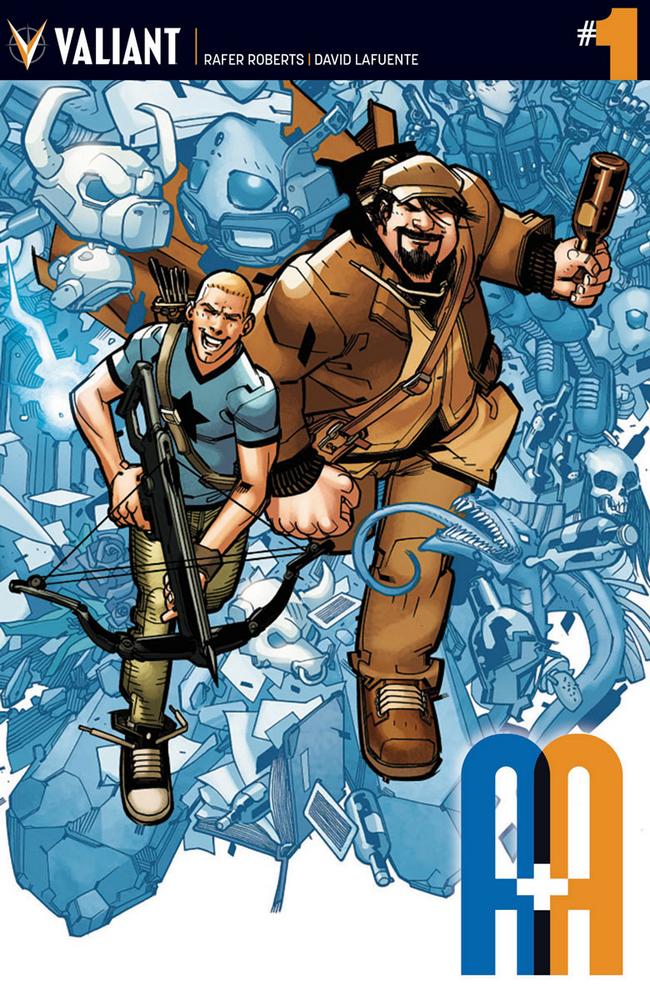 A&A: The Adventures of Archer & Armstrong #1 opens in 1953, with Armstrong at the heart of “another stupid and poorly planned adventure.” With a business partner named Frank, Armstrong spends the early portion of A&A: The Adventures of Archer & Armstrong #1 recovering a locket from an Italian restaurant. Frank comes back to play a part in the modern-day segment of this issue, giving readers a chance to see Armstrong as a compassionate soul who takes his friendships to heart.

A seemingly mundane opening leads to an inexplicable issue filled with, well, all sorts of stuff. A&A: The Adventures of Archer & Armstrong #1 is certainly more accommodating to seasoned readers, but writer Rafer Roberts and artist David Lafuente provide a nice introduction to one of Valiant’s most entertaining comic book couplings.

Beyond describing Armstrong through the opening scene, this oddball buddy comic has something for everyone, from fisticuffs to mystery. Featuring a straight-laced, uptight, teenaged martial arts master (Obadiah Archer, also addressed within the story as: “Angry, violent man”) and a blustery brickhouse of a man (Armstrong) known more for his ability to consume mass quantities of alcohol than for, well, anything else. As Archer describes his titular partner, “He’s a large, bearded, probably drunk, possibly pantsless man.” Oh, and Armstrong has a satchel that makes Mary Poppins’ magical bag look like the Ziploc sandwich variety. Armstrong’s bag is the focal point of this issue and it delivers all sorts of hilarity, action, and entertainment to allow Roberts to write up the buddy book you didn’t know you wanted.

Filling A&A: The Adventures of Archer & Armstrong #1 with imagery from and around Armstrong’s bag, Lafuente crafts the twenty-six pages of this story on a tight grid system. And he fills each and every panel. Ryan Winn capably inks Lafuente throughout, while Brian Reber earns every cent of his colorist wages. Lafuente’s grid is based on twenty-four panes per page, with classic comic book gutter space to provide breathing room.

Some panels are just barely over an inch square, but filled with detailed storytelling (if not detailed characters, which Lafuente also somehow manages to do!) that stand alone nicely, fortifying the flow of the tale. There’s even a page with twenty-four panels of the same size, putting the once noteworthy nine-panel grid to shame. Frequently, Lafuente uses the panels to assist his storytelling, setting foreground or background scenery across a row of panels and then moving the characters through the panels deftly, as a child would play with paper dolls.

His style broadcasts a heavy manga influence in the faces, shapes, accents, and wild gestures, which works for a comic filled with magic bags, goblin associates, ninja-nuns and a wide variety of odd (and sometimes mesmerizingly realistic) backgrounds.

Between the story and the art, A&A: The Adventures of Archer & Armstrong #1 is a madcap romp through the anything-can-happen playground of comic books. The leads aren’t superheroes, they’re just characters in a drama. Except their drama includes some comedy, some fantasy, some science fiction and a whole lot of imagination. This comic, as mentioned once or more in this review already, has a little bit of something for everyone. Valiant had a strong offering when they came back to comic stands a few years ago, and offerings like A&A: The Adventures of Archer & Armstrong #1 are the type of thing only Valiant provides. Roberts, Lafuente, Winn, Reber, and Lanphear may not be delivering a literary classic, but they sure are delivering an entertaining escape, which is why we all read comics, right?