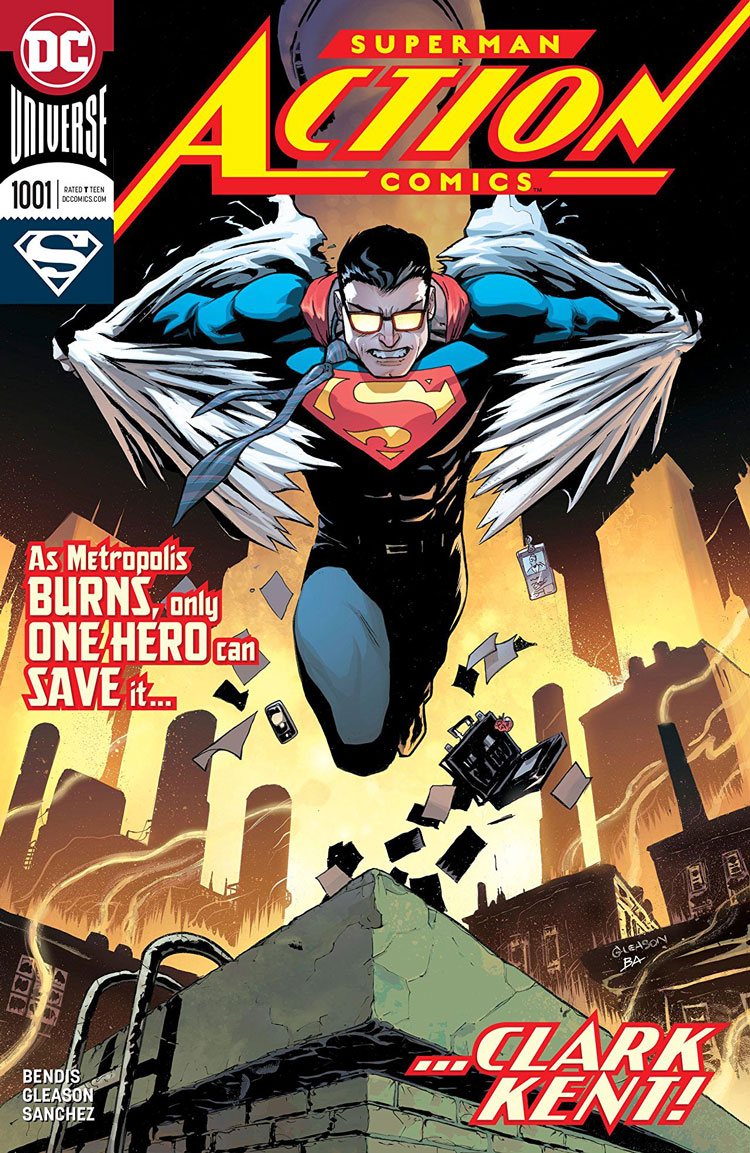 The longest running comic in history continues on with the one thousandth and first comic that kicks off Bendis run on the title and it’s a grounded approach on Superman that’s all about Clark Kent and Metropolis’s relationship with Superman.

With Bendis handling both Superman and Action Comics, there needs to be a defining difference between the two to separate themselves from a storytelling perspective. With Action Comics, Bendis is firmly planting the title as “Metropolis: The Series” in a way. The people of Metropolis take center stage in this opener and Gleason wows with two opening pages that are a typical beat in Superman’s world plotted out with Bendis writing that sets our hero on a journey across the city and dealing with the people that inhabit it.

Superman is on a case in the opening issue, Gleason and Sanchez light up the two pages that begin the issue with the energy that Gleason’s art is known for. He takes a crime-riddled attack into a conversation that takes full command of the page with lettering from Reed setting the scene. Superman’s actions have a great afterimage effect of catching bullets as a maniacal gunman makes the Sanchez colors pop and shine with a spray of bullets.

Gleason focuses on the larger action moment to bring the page together with Superman being the polite hero he is inside panels on the side talking to the criminals with the same energy he does to the large action. The facial expressions and details of smaller panels go in line with Bendis’s writing that feels very classical and humor-filled.

Bendis’s writing feels perfectly suited for the ground floor of Metropolis and its citizens. Sanchez’s colors make for a glossy and busy Daily Planet as Bendis focuses on the human cast that rounds out Clark’s life. Gleason only specifies the people involved in the conversations and the pencils from him give everyone their own style and characteristics. He strengthens Bendis’s plot throughout with his art as clues and the nature of the story gets dropped to Clark and newer characters enter the fray.

With this opening to his run on Action Comics, Bendis is giving the people of Metropolis a say in how the Man of Steel is viewed. Crime and Superman are always on hand and Superman has a big part to play in that, seeing how Superman is viewed and thought of leads to more questions than answers later on in the book but that’s part of the mystery… and it isn’t the only one.

Superman visits his new friend, Melody Moore, to inquire about the fires that supposedly have his name all over them as a witness has claimed it’s Superman’s fault. Despite being a conversation heavy issue, Bendis lays the groundwork for a street-level Superman adventure truly bringing his talents but in a DC flavor. Sanchez’s colors are perfectly suited for Superman. No matter the background or area you’re drawn to the bright and vibrant blue and red of his suit always putting him at the center of conversations and making him stick out amongst the normalcy of where he goes.

Superman is just as righteous and heroic as we expect him to be as Bendis bounces him around Metropolis to get to the bottom of the fires and Gleason can’t be overstated at being a top-notch artist with his detailed handling on the citizens of the city and the detailed expressions that make the book light up with some energy as it’s about Clark Kent and the people of Metropolis at the end of the day.

To close out the issue, with the introductions to some threats to Metropolis that Superman doesn’t even know exist yet. The new and clear issue to Superman’s world seems to be moving in secret and with ferocity, as a simple plot to throw off Superman clearly has bigger fruit to soon come to fruition for Action Comics. Bendis strikes the chord with Action Comics to finally scratch his street-level itch that he’s best known for only this time it’s with Superman and company in the driver’s seat.

With Superman being the DC Universe spanning extravaganza level title, it’s nice for Action Comics to lament how and why it’s a different beast altogether and the differences are making sure you pick up this title. The connective tissue from Bendis’s first foray into Superman’s world The Man of Steel weekly series isn’t lost here and continues to play a role in how Clark approaches those around him and his world.

Action Comics enters a new age quite literally with not only getting over the one thousandth issue hill but welcomes an all-star writer that is using Superman’s world in some interesting ways with what each title will follow when it comes to the Big Blue Boy Scout. Action Comics takes the lead on a story that puts the shining city of Metropolis and its Guardian on display and looks great while doing it with long term Superman art team, Gleason and Sanchez on it to continue the detailed and colorful approach to Superman. Reed isn’t to be lost on letters as he gets instances to let loose and ends on a page that will make a lot of fans scream with delight because it opens a lot more questions to be had in a long line of them.

Bendis uses his short time on the Superman line to set up plenty of things for Clark to worry about and with a debut issue that acts as a standard for what’s to come, he sticks the landing while leaving us interested for more.