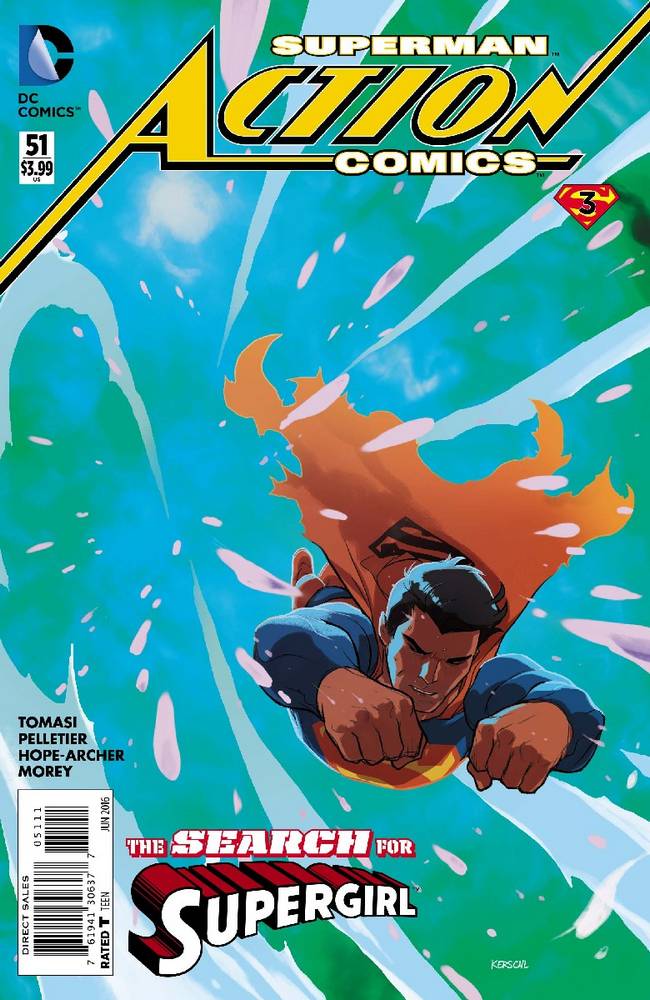 The Peter J. Tomasi-written “The Final Days of Superman” soars into Action Comics #51 as Superman rushes to National City in an attempt to rescue his cousin. Paul Pelletier brings his pencils, Sandra Hope Archer inks Pelletier, Tomeu Morey colors the action and Rob Leigh letters it all, which includes the further advancement of a pair of subplots and the building of the foundation for Supergirl’s post-Rebirth existence.

Pelletier demonstrates to readers that he knows how to draw the adventures of a pair of Kryptonians with sleek grace and dynamic line work, even if most of their panel time in Action Comics #51 is passive and even conversational. Tomasi gives Pelletier plenty of portfolio pieces, from having the Man of Steel bust through a wall at the secret (no-so-much-any-longer) Department of Extra-Normal Operations facility to a wonderfully organic and aggressive six-panel collage/synopses to bring readers (and Superman) up to speed on Supergirl’s recent escapades. Pelletier employs plenty of fine-tuned expressions and inserts copious amounts of details, including subtle Kirby-esque flourishes in the D.E.O. lab equipment that give it a Project Cadmus vibe.

The penciler’s storytelling choices are smooth and crisp throughout the comic, so much so that this story would be just as enjoyable without colors or letters. Rob Leigh proves his worth, however, with a wide array of loud sound effects, as one might expect from Superman’s adventures. Leigh shakes things up, and gives the heat and matter dispersed by not-Clark Kent’s heat vision a “ZZRAAKK”, punctuates a scene that Lois Lane takes over with the tinny throb of the “KZZZAAAKKK”-ing taser and he even layers in transparency to many of the effects without compromising their impact.

Sandra Hope Archer is just as critical to the final appearance of the story; as she does a slick job preserving Pelletier’s lines and adding depth and dimension to the strokes and crosshatching. Tomeu Morey amplifies the depth and temperature in the story and adds visual effects to Action Comics #51. The colorist silhouettes background characters in complementary colors to the actual page background, propelling the main actors of several panels forward less through overdoing any color work on them ad more through a study of creating depth through hue and shade. Morey follows Pelletier’s lead on the lighting, but also employs some creativity in tone and intensity.

This visually stunning book keeps readers invested from start to finish, as Tomasi checks in on the subplots and supporting cast while introducing new elements to the story. The not-Superman (who really is not a nice guy, unless he’s acting as Superman, albeit with significant energy production) thread brings the character closer to the Man of Steel’s inner circle, as Tomasi adds a wrinkle to the character’s power manifestations.

The other subplot, involving the Chinese Zodiac attack from Batman/Superman #31, also takes some steps forward. Tomasi, Pelletier and company take us to the laboratory of Doctor Omen, who tasked the Zodiac with acquiring a blood sample from Superman. Doctor Omen’s medical background has to be questioned, as she certainly could have chosen a different method to collect the sample of Superman’s blood that Dragon brings her. All the same, it is a dynamic exchange that nudges this subplot every so slightly closer to the spotlight.

With three installments complete and five on the horizon, there is simply no denying that “The Final Days of Superman” is going to have a significant impact on the Superman family of comics leading up to and following Rebirth. Thankfully, Tomasi keeps readers invested in the here and now as well, though, with plenty of action and adventure. His characterization of Superman in his growing desperation is believable, but the writer also gives readers a Supergirl to put faith in and enjoy once more. This could have easily been a coast between the previous Superman tale and the launch of Rebirth, but Tomasi and crew are doing their very best to make “The Final Days of Superman” one of the most enjoyable tales of the New 52 and, more importantly, a memorable Superman tale for fans to remember fondly, regardless of the era or surrounding continuity.