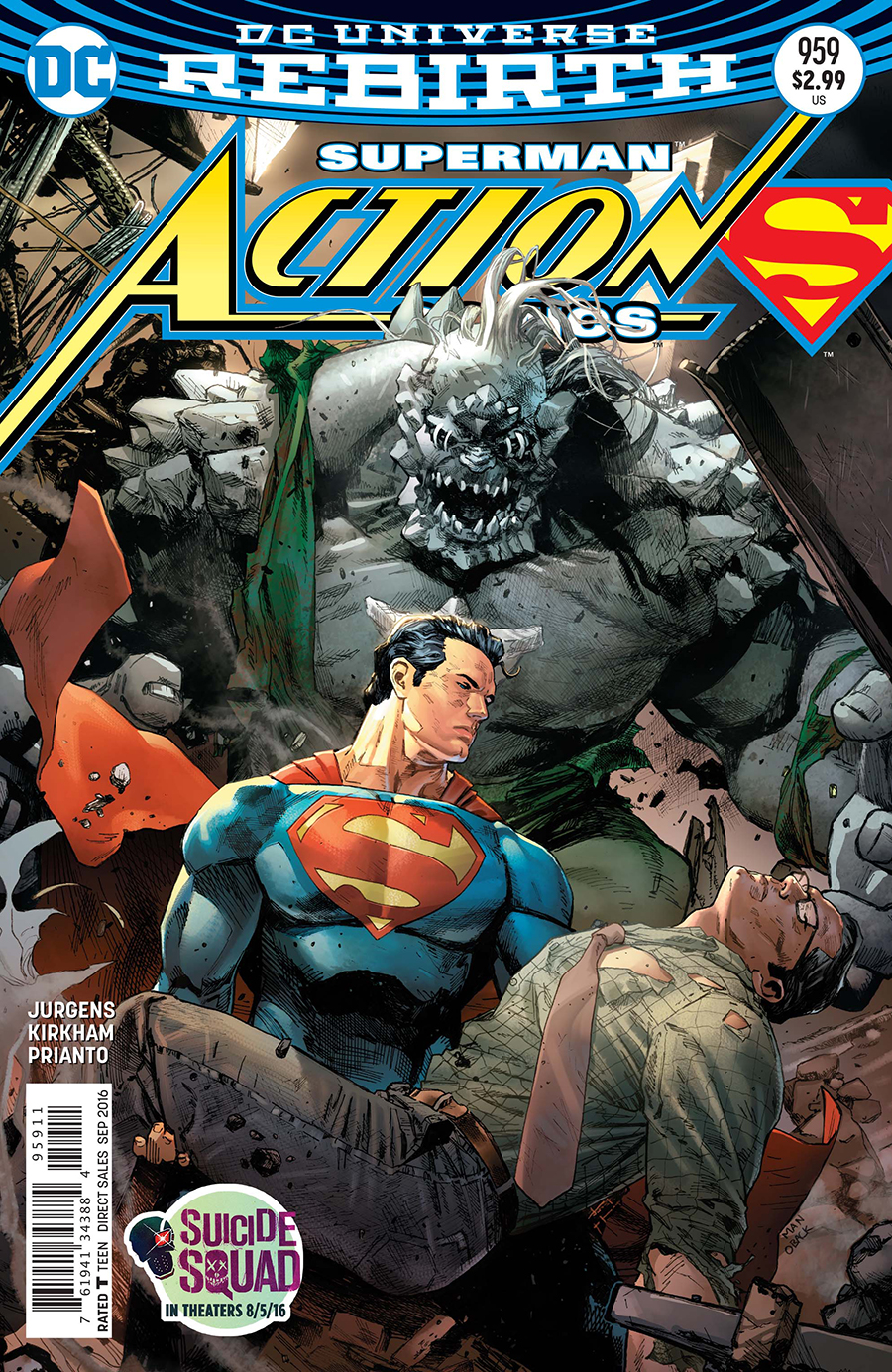 “Path of Doom” stretches into its third chapter in Action Comics #959, as artist Tyler Kirkham joins writer Dan Jurgens for a gigantic slugfest already in progress. Last issue left Lex Luthor in the hands (literally) of Doomsday, Superman was trying to strategize his way to sway the fight. Clark Kent was on the scene, observing the chaos firsthand (Wait, what?), while Lois and Jonathan Kent were watching the whole thing on television from the relative comfort of their home, despite the uneasy reality that Superman was fighting the being that once killed him.

Not exactly the best point for a commercial break or artistic change-up, but a twice-monthly book can’t exactly punt the new schedule three issues in, can it?

That’s where Action Comics #959 faces some challenges. Jurgens alluded to it in his interview with Keith Callbeck, consistency is key, especially when artists change up, but consistency can sometimes hinder creativity. Or disrupt the story’s flow.

After all, at the end of Action Comics #958, Doomsday had Luthor’s head in his hand as easily as you might grab an apple. Luthor’s escape from Doomsday’s clutches (literally) needs to be addressed, and receives no such closure here. Sure, it’s easy to write this off as being an aspect of Luthor’s super-suit, but in this very issue he struggles to make time to effect repairs on that suit.

Being a savvy comics veteran, Jurgens provides a scene cut that helps Luthor weasel his way out of Doomsday’s hands, and opens the issue with deep thoughts from Lois Lane.

Lois’ recollections of Superman’s original fight with Doomsday guide the reader through the mosaic Kirkham crafts of panels shaped by Lois’ hair, but the visual sentimentality of pensive Lois doesn’t work well with the Medusa-wannabe hairstyle.

Furthermore, the creative visual choice overpowers the emotion Lois is conveying to the reader. It’s serviceable, sure, and clear enough, but it doesn’t play as strongly as it could or should. Rob Leigh helps the readers follow the flow nicely, and he gives characters clean, distinct caption box formats, but the whole opening scene with Lois could have been emotionally richer with a different font and perhaps more condensed lettering, as you might find in a periodical article.

Kirkham’s art is detailed when it needs to be and frequently leans on Prianto’s coloring for depth, definition, and completion. The line weights vary throughout Action Comics #959, as do the levels of detail, panel framing choices, and Kirkham’s character presentations.

There’s a lot of good stuff to like here, as Kirkham makes Superman larger than life and Doomsday imposing beyond that. More often than not, though, the art has a gestural quality to it, good for energy and expressionist presentation, but when viewed through a critical lens, those same lines become somewhat hurried and unfinished. It’s not bad, mind you,

Arif Prianto brings an interesting mix of coloring styles, using watercolor effects for the backgrounds and more gradient-based and cut-based choices for the characters and foregrounds. There’s ample opportunity for bigscreen effects, after all, Superman IS fighting Doomsday in Metropolis and Lex Luthor is wearing a super-suit (dubbed “SuperLex” by Jon) with explosions and heat vision and rubble.

Action Comics #959 is a bit of a letdown after a strong first two steps from Jurgens and Zircher, but it’s not a total loss. There’s plenty to absorb here, from Mr. Oz’s observations during the battle to the continued mystery of Clark Kent playing the role of innocent bystander.

Jurgens is keeping Superman’s family as the center – emotionally and thematically – of Action Comics, and he shows readers just how heavily Superman having a family impacts his decisions and actions. This is still the Superman everyone was glad to have back in the first two issues of the post-Rebirth Action Comics run, and his determination is infectious.

While I didn’t know what to expect with the visual team tagging out after two issues for a breather, I know now. Hopefully the second issue for Kirkham and crew gels a bit better than this one, and, maybe, just maybe, we’ll get a little closer to the finale of the Doomsday battle.