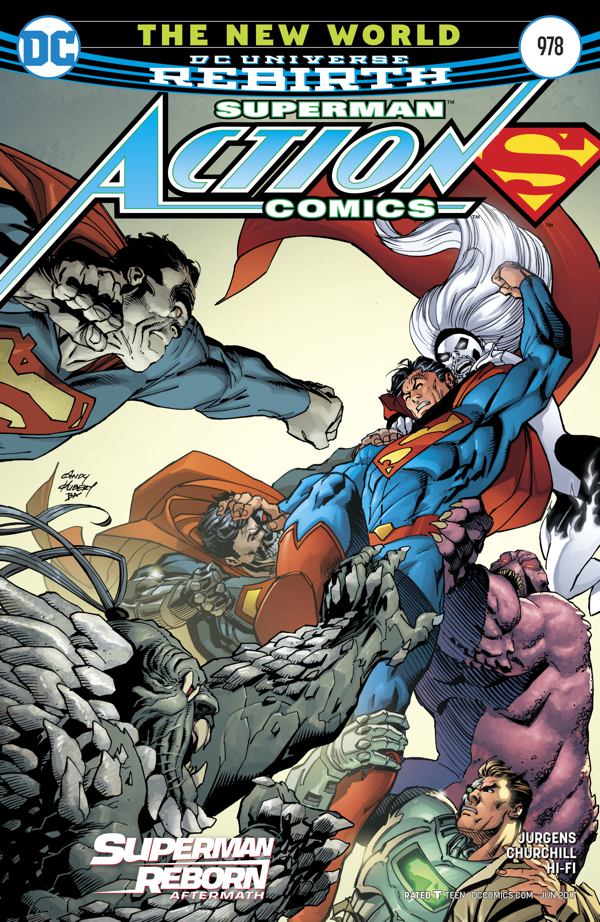 There’s just something about the history of Superman. We’ve seen Superman Reborn completely upend everything we thought we knew about how the Man of Steel fits into the history of the Rebirth timeline and Jurgens clears the air while leaving things to ponder going forward. The continuation of the one true history of Superman reads like a review of your life’s greatest hits with commentary from the man in question.

Immediately from the opening pages we’re treated to one of the cornerstone moments of the Superman mythos, Clark and by definition Superman meeting and saving Lois Lane. Kal doesn’t dwell on these memories reaffirming what we as fans already know about things, that this is the definitive memory of how they meant and what followed suit is how it’s been told time and again with Barberi giving us a classical feel with his pencils, Santorelli’s ink’s, and Hi-Fi’s colors. Not being dissuaded in his feelings that something is truly missing he continues the origin recollection, unaware of the voice only he can hear and the forces gathering against him in the form of a Revenge Squad.

The trip down memory lane quietly acts as a reminder for who Superman is at his core. He could have easily used his power in the Daily Planet to get back at Steve Lombard for pulling a prank but people like Lois center him, bringing him down to our level. Superman is nothing without the people on the ground floor right beside him, supporting him, and seeing Clark the Office Goofball have fellow coworkers defend him and stand up for him shows Superman that there is kindness in everyone. The normalcy of Clark Kent empowers Superman to know that Earth and the people on it are worth saving, no matter the threat which Barberi shows wonderfully in a double page spread full of Superman Villain and personal history.

We continue the trip with Jurgens hitting more milestone Superman moments that defines what Rebirth has done for him and what it means for the DCU going forward. The Death of Superman, The Surviving Supermen, Marrying Lois, and more recently in fresher continuity the deaths of Ma and Pa Kent. All of this isn’t dragged down, given the bare minimum for these stories in snapshot panels that makeup the cornerstone of Superman’s history. Things begin to get blurred for the recent developments as we arrive at Lois being pregnant and Superman works in his New 52 armor and the Lois and Clark miniseries even comes into play to explain why Superman donned the black armor once again. Everything in Superman’s History is now streamlined into one neatly (give or take) timeline but the future is his more pressing concern.

The voice is none other than Mr. Oz who is ramping up his appearances in Superman’s life as of late and wants to make it known he can reach him anywhere, Fortress be damned. It sets the path towards a cliffhanger on both fronts, as Superman is in the dark about Mr. Oz and his Rogues Gallery come into focus on the moon to form the Superman Revenge Squad with one mighty yellow villain missing before being fully formed. Action Comics now has the ground rules laid out to fully embrace and move past the inner workings of what Reborn has done.

Throughout the issue Barberi properly captures characters of all shapes and sizes, filling with panels with moments and action and you never lose yourself in the mix of it all is good for an issue dedicated to what came before, what is, and what’s happening next. Combined with the inks of Santorelli’s which blend into the pages so well they aren’t noticeable to where it’s overly distracting and the Hi-Fi colors which complete the overall package of the book and you have a well-rounded finale to an arc that sets the stage for the future of Superman.