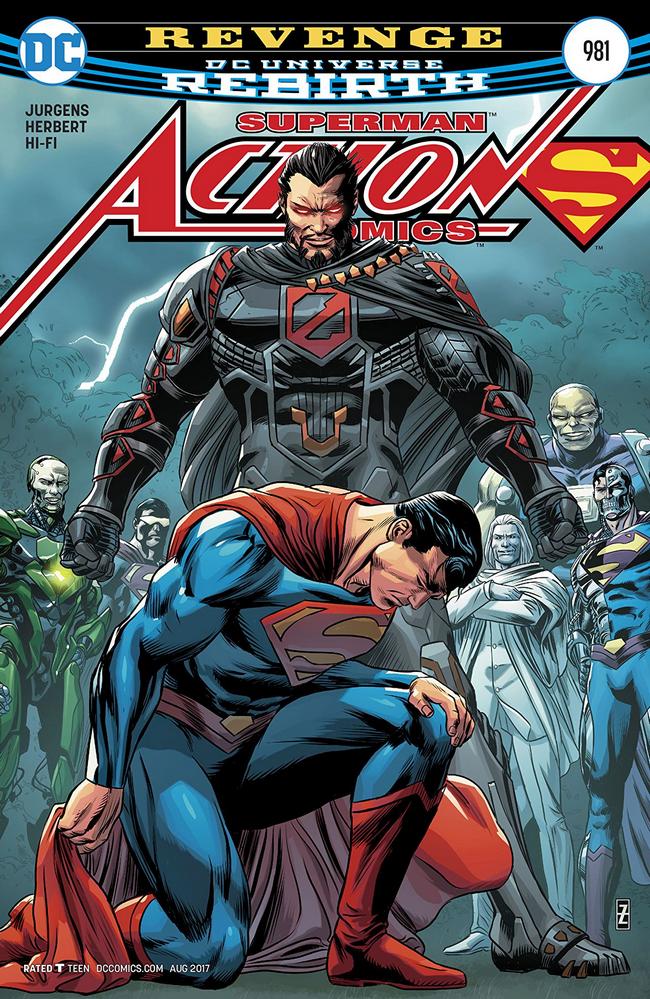 The pieces are coming together for the Superman Revenge Squad. After a harrowing journey into the Black Vault proves more for Superman to bear, the story arc increases the action output as the race to stop the Revenge Squad grows deadly.

Still reeling from the nightmare realm that is the Black Vault, Superman has no time to be deterred by his nightmares and doubts that continue to grow in the back of his mind. The ramifications of crashing into Belle Reeve with Kryptonian sized problems are also being felt in Suicide Squad. It’s a key entry in this soft crossover between the two titles to understand the full scope of Zod and his motivations beyond not only joining the Revenge Squad but also getting away from the Suicide Squad and seeing the state he’s left them in.

The three evil Supermen get some needed conversation going between them now that the final piece of the Squad is now on their side and Zod is no punk whatsoever. Zod is on a one track mind when it comes to his goals and aspirations and his entire being in the Revenge Squad moves the underlying tension between Cyborg Superman and himself to an interesting place to say the least. If you’ve been keeping track on the Suicide Squad side of the crossover, Zod was quickly introduced as a member of the team before he got rid of Waller’s “leash” on him and nearly destroyed the Prison and the Squad themselves. Cyborg Superman and Eradicator had a part to play in convincing Zod but Cyborg Superman orchestrating the entire Revenge Squad and potentially being usurped by General Zod could become a growing issue if they don’t destroy Superman before that.

Herbert is a smart choice to include on the art duties, his way of drawing characters supplied Hi-Fi giving darkened shadows and reinforcing them to give some seriousness to the characters when they’re speaking. Herbert even gets to flex his action muscles when Superman catches up to his three longtime foes for a sky fight deadlock. Superman erupts from the sky to finally settle the score and its packed with all the explosions and gloating you can imagine it has. The action itself gets seen from multiple windows including a (unlucky) Helicopter that uploads the fight leading to the next great tease of the Revenge arc in the process.

Over the course of this arc, it’s been quietly shown time and again that Superman likes to handle things alone with occasional help. The Revenge Squad thus far has challenged him physically and mentally and dealing with six of your greatest enemies is tough work even for the Man of Steel. Towards the end of the issue, it’s a surprising development that is drummed up to be a shocking last page reveal that adds another wrinkle into the story arc but it comes off as a reveal that will more than likely only play out as a crutch to add to the reasoning of why relying on your Super Family is necessary when a situation grows out of hand.

Revenge Part 3 ups the scale and dire situation of Superman vs. the Superman Revenge Squad to the darkest period it’s been yet. Jurgens now has a Superman that’s doubting himself and not fully in the fight and brave and courageous as he may be…it won’t be enough. The theme of family has been explored and more so teased to greater effect in this issue. Our hero is down and out as it stands and it’s going to take some like minded individuals that bear their own “S” on their chests to help him out in these trying times. Revenge Part 3 continues the adventure of the Superman Family and gets all of the pieces on the board as things mount for both sides.