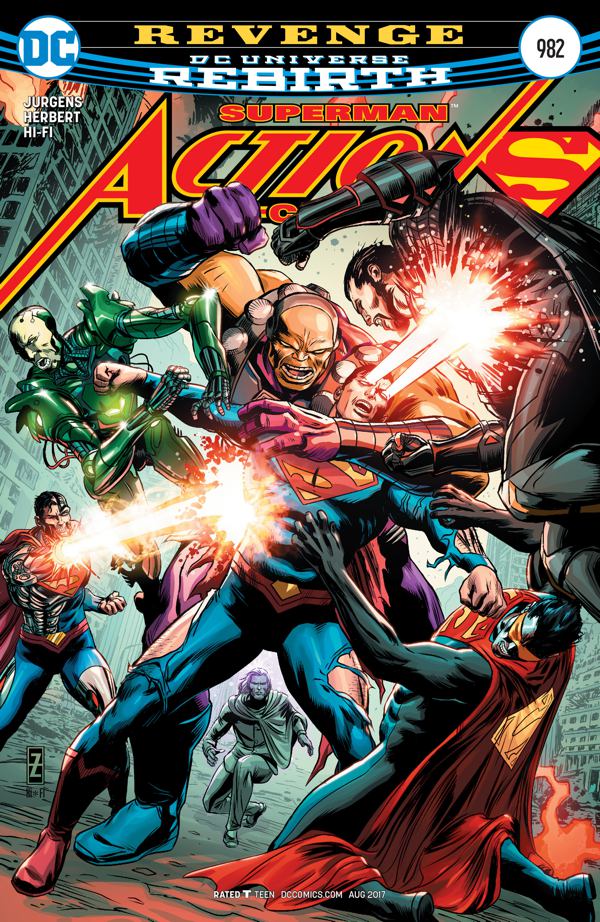 The time for talking and planning is over. The Superman Revenge Squad puts their plan into motion and it’s all hands on deck as all the cards are laid on the table and Superman faces the fight of his life against his hard hitting Rogues.

Jurgens continues to flesh out the Revenge Squad as their endgame is within sight and the clashing personalities continue to bounce off of one another and some things are brought to light that makes their assault on Superman all the more dangerous and risky for the Man of Steel. The entire arc has had the villains operating on Batman’s Moonbase and it’s come fully stocked with knowledge, tips, tricks, and information on everything they need to know about Superman and his Fortress of Solitude. The Fortress is home to secrets and technology aplenty, not even Superman knows what he has in there but everything the villains need for their own specific endgames are all housed in there as well. It becomes clear that a Battle of the Fortress is mounting and the villains are roaring to go.

Throughout the arc, Jurgens has kept the spotlight on the plotting villains allowing for Superman to take a back seat to instead focus on and redefine his Rogues Gallery. Cyborg Superman faces friction from other players like General Zod and Mongul but reigns them in because they all want the same primary end goal and need each other (for now) to get it. Jurgens writes Cyborg Superman, the informative ring  leader with ferocity and intellect to match everyone else in the Revenge Squad. He has the most to lose in this Villainous Gambit he’s created and he hasn’t cracked under pressure and to keep five other Superman related powerhouses to play by his rules is nothing to wave off.

Herbert remaining on art with Hi-Fi again keeps the art consistency at an high even though at some points in the issue when the action begins to explode the art ins’t at it’s best with a group of bodies and blasting happening. Overall he keeps it together and Herbert keeps his way of drawing characters tight and together to their own body and uniquely to their character and traits. The only similarities you’ll see between Cyborg Superman, Eradicator, Superman, and Jon are the capes and the “S” on their chest. Hi-Fi goes all out on the colors because it’s an explosion of sound effects and characters of all types, human and alien. Herbert gets to up the ante with action as the battle of the Fortress kicks off and it’s a challenge for the Man of Steel given his condition.

Superman becoming blind and with no immediate solution has handicapped him as he tries race against the clock to stop the Revenge Squad and Jurgens puts the final nail in the coffin that’s been bubbling in the background since Revenge Part One…The theme of family remains key and at the center of this arc whether it’s about villains or heroes. The Boy Scout has witnessed firsthand what the Revenge Squad can do and now it’s time for more like minded individuals that bear their own “S” on their chests to help him out and the last page sets the stage for just that.

Revenge as an arc has been building across the entire Superman Family of titles for months and it’s about to burst in a way that’s truly fitting for a comic called Action Comics. Breaking Superman down bad enough to need other literal “Super” heroes in his corner feels like reinforcing one of the things DC Rebirth is all about. Action Comics has also fared well in getting artists and colorists with the same style likeness that it doesn’t make each continuing chapter of Revenge feel disjointed, Revenge is well on it’s way to becoming a story to remember for the ages with both Superman Villains and Heroes clashing at the Fortress of Solitude.