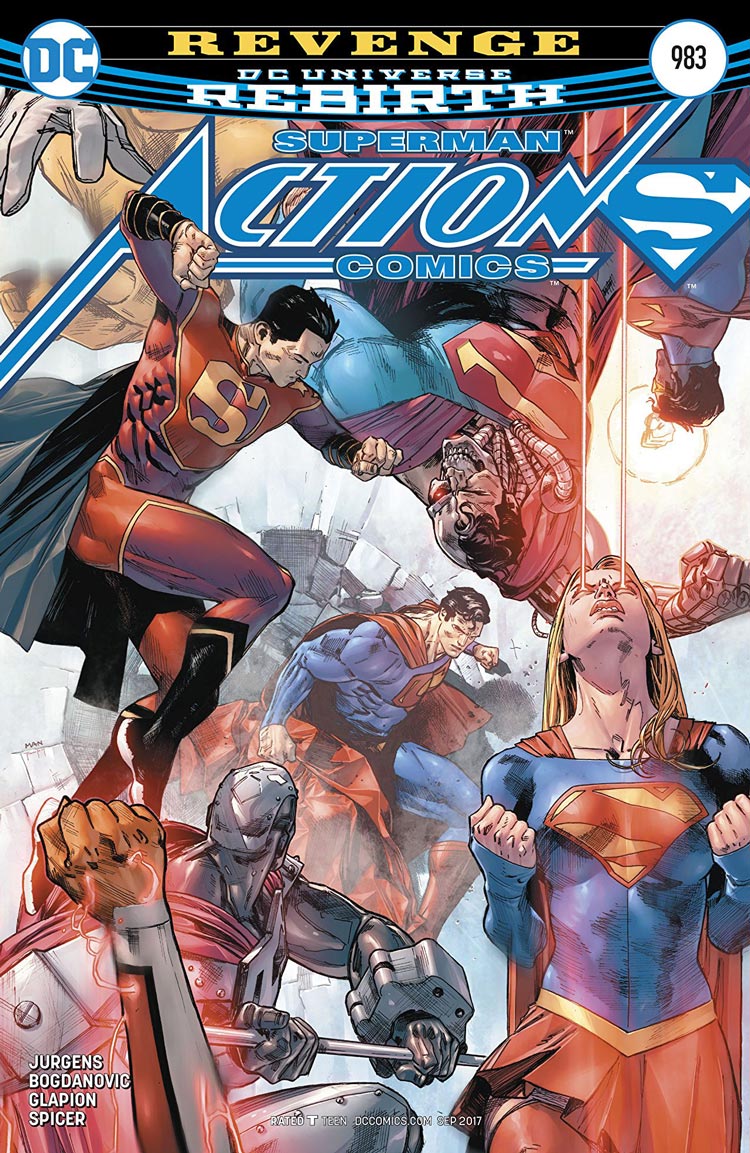 The players are set, the location is primed and ready for punching and energy blasts, the Superman Revenge Squad is ready to do battle against the connected Superman Family. And it’s a fight that stays true to what the story arc has proven thus far… the villains are here to stay and are a force to be reckoned with especially together.

The climax to “Revenge” is finally here and as Mongul states, “Death is in the air.”

The Superman Family has come to the rescue of a blinded Superman to prevent the Revenge Squad from getting into the Fortress which houses technology and information that every one of the villains could use to kickstart the end of the world. Jurgens leaves the character development out and gives the fans small and large scale action oriented battles that fits all of the characters on both sides and their characteristics in between.

Before getting into the fighting rounds and flying fists, Jurgens nicely establishes everyone and their respective voices. Clark gives us a rundown of his family and his enemies and even if they don’t say much, the characters that star in other titles have their voices intact.

Throughout this arc we’ve seen General Zod gradually take control and usurp the strategy that Cyborg Superman put together and in this issue we learn why Zod is such a threat to Superman’s life. General Zod quickly breaks down which member of the Revenge Squad should attack which of the Superman Family telepathically with Blanque setting him up as the master strategist we known him to be. He makes the first move and Bogdanovic and Glapion do their best to invoke Capullo in the set pieces and the various battles.

Zod remains a focal point as he analyzes and discovers Kal’s secret mid-battle. The following pages are the Revenge Squad pairing off to face the Superman Family and the colors from Spicer give each individual fight it’s own identity and personality as each own provides it’s own level of bombastic action and quick glimpse as he can’t spend too much time on each specific battle.

Jurgens and Bogdanovic chart a path for each fight, all flowing from one character to the other showcasing what the Superman Family and Revenge Squad both bring to the table. The fight grows savage for our main hero as Zod and Kal do battle across the Fortress and Bogdanovic ups the ante as Zod deals with Superman in a way that focuses in on their specific powerset as two Kryptonians and the lettering by Leigh enforces the screaming, punching, blasting throughout the fights and the bold exaggeration lend to the characters at hand doing battle.

Zod expands the fight into personal territory for Kal-El as Lois and Jon get caught in the crossfire of the fight. While their fates seem to be all but certain there’s room left to believe that they could still be a helping hand in the finale to the arc. The two parties gather and it’s here Zod shows he’s letting on more than he initially told the group of super-villains when he sends Supers into the Phantom Zone with all but Supergirl remaining on the outside. Zod is in full control of the Revenge Squad and they don’t even know what he’s planning at this point!

Throughout the storyline, the General has been marked as a major player in the plans of the Revenge Squad and we see here that he’s a major player for Superman and as a character in itself as he becomes the true villain of the arc with no one to stop him and everything going to according his plan.

The addition to Bogdanovic and Glapion to the art team gives us an Action Comics where the characters come across rounder and better drawn for the action scenes, full of life and expression, and looking quite well. The colors by Spicer come off uniquely on their own in the confusion of capes and too many people with an “S” on their chest. This installment of “Revenge” serves as the beginning of the end for the Revenge Squad and finally united Superman Family as Jurgens and the art team let loose. It clearly displays why the book is called Superman: Action Comics in the first place.