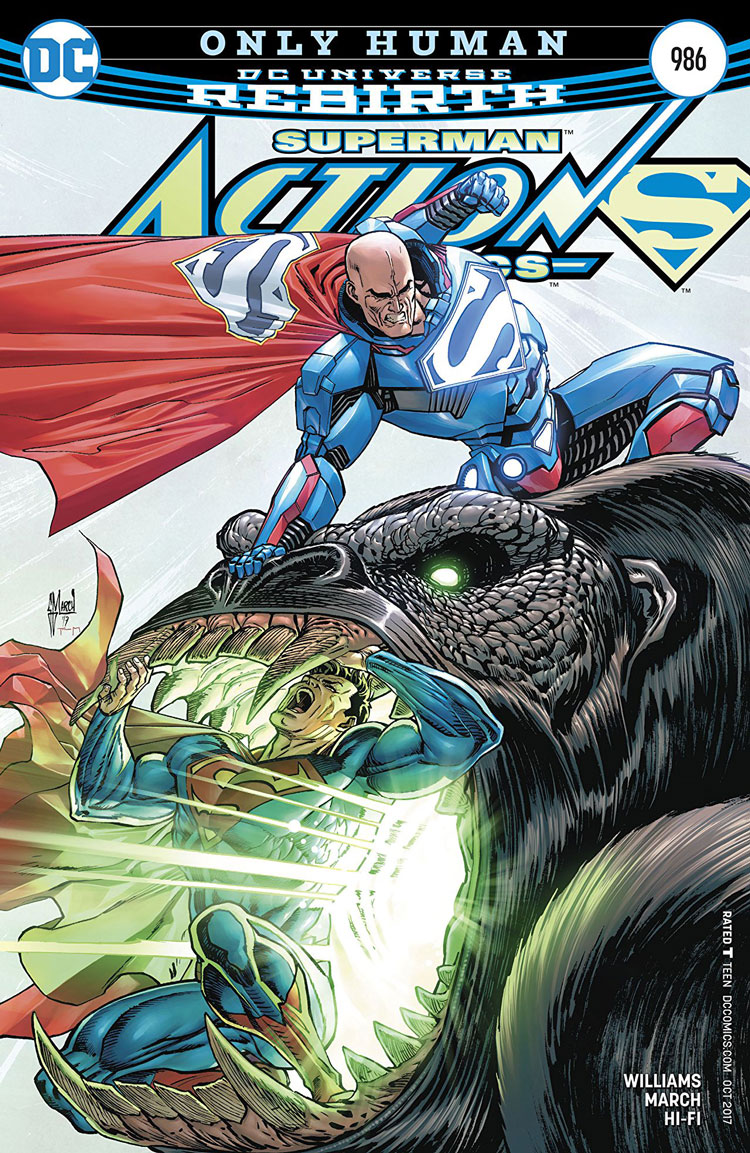 SuperLex and Superman have it out under technological influences as the guest star arc of Action Comics concludes with another look into the Kal and Lex dynamic that’s faced shakeups as of late.

Williams keeps the focus solely on the two Supermen in the predicament they find themselves in with being forced to fight each other thanks to The Machinist. He keeps the conversation surrounding the two about their own versions of humanity and what they mean strongly through the fighting art that comes across greatly from March, providing an appropriate amount of action with the Hi-Fi colors supporting them.

Lex Luthor has become his own manner of Superhero in the Rebirth era and has a few arcs under his belt to show for it and that continues here. A newly added wrinkle is thrown into play during the fight between Superman that throws SuperLex into his own twisted version of his Godhood and what humanity means when it comes at a cost. March gives all of the scenes the right amount of brutality and bombastic style, complete with sound effects crashing and ripping from the pages as the battle escalates into the upper atmosphere.

We get a touching moment between the two men in space and Williams charts the differences that Lex has always has against Superman. Superman wants humans to elevate themselves to his standards of goodness and Lex believes only a human can truly progress humanity, and being the smartest man on the planet surely helps.

After some quick thinking, SuperLex and Superman halt The Machinist and his plans and the “action” part of Action Comics is on full display in the process as Superman makes quick work of the henchmen using his strength and abilities. The panel work is a lot tighter and smoother helping display March’s movements that flow better in both small and large panels.

The closing few pages kickstart the end days for one of DC’s long standing mysteries involving Mr. Oz and he has a bone to pick with Lex. Over the course of New 52 and Rebirth, we’ve seen him keep track of and even interfere with plans of Heroes and Villains and this moment with Lex is no different.

Oz all but humiliates Lex exclaiming how even when he does good, the bad will be there because it’s his nature as a human. Oz has been making his ties to the Superman Family stronger as time passes on and with September issues revealing who the hooded man is, these pages are important tells into who he might be.

During “Revenge” he was revealed to understand Kryptonian technology and weaponry to the point he guided Jon in a fight with General Zod, and in this issue he makes it a point to destroy the “S” of Luthor’s suit and put him in his place. The danger surrounding the Superman is mounting on different sides and the payoff is around the corner for Superman Fans, suffice it to say… the next few issues of Superman will break Superman’s world in more ways than one.

The guest star arc for Action Comics concludes with an issue that greatly improves on the first part and expands more on the relationship of two timeless characters that are faced with new problems and new standings with one another now that they are both heroes to the world. March and Hi-Fi have wonderful chemistry with upping the action and characters and the colors that keep all of it looking fantastic. Leigh’s letters are on full display as well because boy do things go boom and get destroyed in this issue!

“Only Human” tells a nice interlude chapter of the ongoing Action Comics saga that seems to be reaching another point of critical mass sooner rather later.