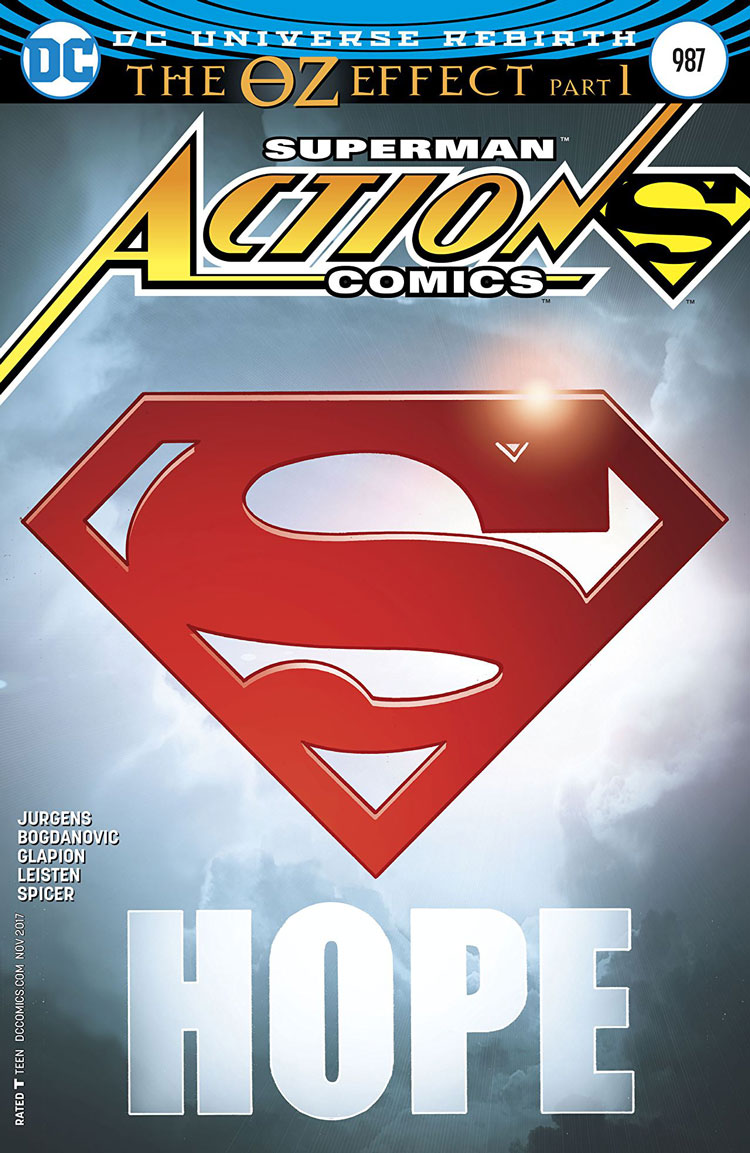 By the end of this issue you will know and get a minimal understanding of who Mr. Oz is and his endgame involving Superman’s world. Since Superman #32 (The New 52), Mr. Oz has plagued Kal and Clark’s life to mysterious goals and over time.

From the DC Universe: Rebirth #1, moments of Action and Detective Comics, and other titles including this week’s Supergirl…Oz has made his appearance known to a select few throughout the DC Universe and it’s all led to this moment that’ll up end both parts to Superman’s life as he knows it.

Wrapping up on some loose ends that stretch to the ending of the last issue and the ending of Supergirl #13, Mr. Oz continues to make the rounds on numerous Superman related villains and even Heroes to make his presence known and dismantle them one by one with talks of how they affect Superman and his mantra of saving the day no matter the cost. Oz stresses this to his latest victim, Metallo. His talk of humanity is cold and isolated further hinting at his nature at heart and how he views humans, which is pushed to the brink in this very issue.

The scene between Oz and Metallo is played up for tense and more serious than we’ve ever seen Oz with Bogdanovic on pencils and assisting Glapion and Leisten on the inking. The shadows and darkness are prominently featured, throwing Oz into obscurity with the colors of Spicer letting the green illumination of the kryptonite showing his hood and the terrified face of Metallo as the situation sets in.

The next part of the issue is a complete reverse of the deeply dark and shadowed threads of Oz’s plot with a sunshine and bright Superman finally at peace with his recent adventures and Jurgens provides some classical Superman with simple issues to work out but others bubbling right under him. Bogdanovic gives us multiple glances at Oz’s supporters and the pushes of his agenda to see why humanity is beyond saving.

It’s a calm before the storm with Clark and his family at the Daily Planet delivering on some moments of peace and tranquility with the family and the staff. Although nothing lasts forever, Jurgens sets up Superman for a threat that feels all too real in 2017. Through Oz’s supporters that are sneakily identified in all corners of the world at various events that highlight the absolute worst in humanity it mirrors the happenings and air that this year has had. Multiple collisions and terrible acts all happening all over the world are themes that Green Arrow has tackled with its current arc and it’s no different here.

The sunshine of Metropolis is favored for darker areas and an instance of workers at a factory being held at gunpoint by a patriotic employee is all too real and the decay and rampant acts don’t stop there. Bogdanovic and Spicer orchestrate these acts with Superman and his blue always being a focal point of the panels with dialogue from the crazy citizens inciting the violence and evil with dialogue that wouldn’t be out of place in the real world.

The lettering by Leigh gets a chance to let loose as we zero in on an area Sperman he himself helped to make sure was at peace and explosions begin to fly and the mortars, screaming, and explosions rock the environment with only Superman to look on in horror. Similar to Batman Vs Superman, Kal is just one man and despite wanting and believing in humanity to strive to be better, Oz has showed Kal the underbelly of what humans are capable of and the closing pages of Action Comics hold the biggest reveal of all: Who Mr. Oz is.

Being whisked away to an all too familiar location, Superman and Mr. Oz finally air out the truth about humanity and the events currently rocking the world, of Mr. Oz’s design and execution. The final page of the issue reveals the man behind the hood and the clues and hints have been increasing as to why Jurgens has made a sound choice in who Mr. Oz is ever since his introduction in Superman #32 all those years ago.

In recent months, the character of Oz has gotten Superman specific so the character while engaging, does lose some of his mysticism and uniqueness in the revealing pages and dialogue he and Kal has but, it remains to be seen if this character is who they say they are.

One thing is for certain, this reveal is on par with one of the biggest reveals of the year and if the ramifications of Mr. Oz will rock not only Superman’s world but the larger DCU as a whole… Jurgens and company have created a fine issue to usher in one of the long sought secrets of DC Rebirth.