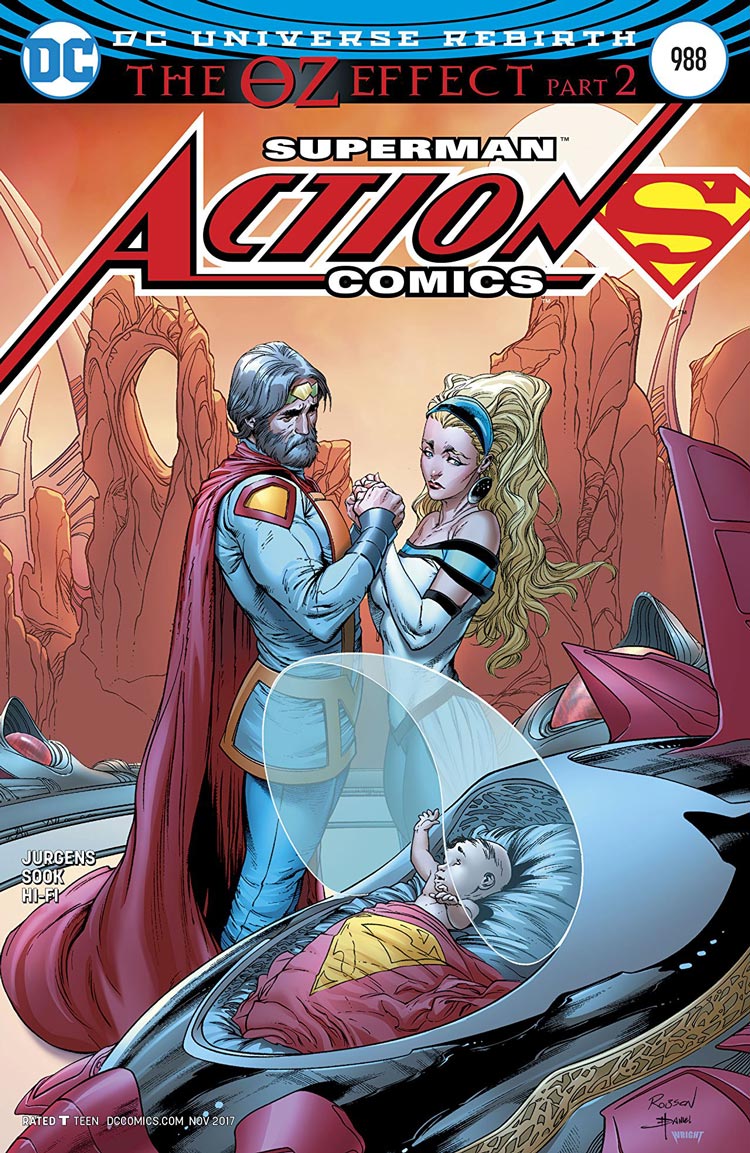 Mr. Oz (or possibly known as Jor-El, the father of Superman) is here and one of the biggest reveals of the year comes with a warped take on the Superman origin. The beginnings of how Jor-El came to be Mr. Oz is explained at length here and while the entire truth is a hard pill to swallow for Kal, it’s a logical origin for a man that wants the best for his son and family.

Immediately from the get-go, Superman speaks for everyone that’s not convinced about the revelation of Jor-El being alive after all these years with one word and a single page of Superman in Sook and Hi-Fi glory. The addition of Sook on the art gives Action Comics a glossy, classical feel and coupled with Hi-Fi who remains a staple on colors, delivers on an issue that is both timely and classic Superman fare.

Jurgens smartly clears the air and begins the path of eliminating some of the possible explanations as to why Mr. Oz is Jor-El, and he has large amounts of evidence to show why Kal isn’t believing his father is saying. Between the events of the DCU Rebirth and more recently, “Superman Reborn” messing with, tangling, and unweaving Superman’s history (thanks to the meddling of Mr. Mxyzptlk), there’s been some controversy and troubled waters concerning Superman. Jor-El certainly seems and acts like the scientist mind we’ve known in certain visits to Krypton and that’s exactly where we head as the father and son attempt to put to rest this twisted origin story.

Sook and Hi-Fi create closed off spaces to let the characters at work chew up all of the scenes. The complexities of Krypton are highlighted as Superman learns more about his family before the inevitable explosion and shows how everything wasn’t peaceful before going into the explosive good night.

Sook is wonderful of capturing characters in the heat of emotions and the colors of Hi-Fi are on par with what we’ve seen from Krypton and her citizens, providing some splashes of color amongst an arguing family that adds small wrinkles to the very well known origin of Superman and him leaving Krypton. It’s in the final moments that Jurgens throws us into uncharted waters.

In a gloriously blazed set of panels, Jor-El narrates of what was suppose to be his final moments, but here’s where the story diverges into potential Doomsday Clock territory. He’s started on his own Earth journey almost exactly like his son, but the location is different and the situation is a far cry from what Clark had to deal with when he landed. A presence far from their understanding created the scenario of Jor-El, an already damaged and broken man land in an area on Earth that shows a teetering edge of what humanity can strive to be and what it shouldn’t be.

His narration is key here. Jurgens writes Jor-El as a tortured soul and you’d be hard pressed to believe that he’s making all of this up to get to Kal for another purpose than to put his son’s heart and mind at ease. It’s a heart wrenching sequence of events that begins as joyous quickly dive headfirst into the creation of Mr. Oz as Sook and Hi-Fi contrast with the evilness of man in the daylight and he’s simply whisked away again seeing what humanity can do throughout history.

In the last issue, Mr. Oz finally began putting his long term goals to work by showing Superman just what humans are capable of doing given the chance, time, and urge. Whatever saved Jor-El to see what planet he’d sent his son too isn’t wrong in the display of what humanity has done over the decades and throughout history. Humans are not the greatest and we’ve shown that on the most smallest of events to the biggest.

The very ideas and actions Mr. Oz showed Kal last issue are very real in 2017 and the battle for Earth this time around could prove to be Superman’s biggest challenge. The threat has never hit home like this and the battle isn’t something you can punch, but something you must believe in and stand behind.

Jurgens, Sook, and Hi-Fi have encapsulated the broad strokes of a warped and jaded Jor-El origin that other titles in the DC Universe have taken advantage of like Detective Comics this week! With the clearest and sharpest art yet on Action Comics revealing the darkness behind one of comics best known father figures, it’ll be a treat to see how Superman handles the continued ramifications of this major turning point.