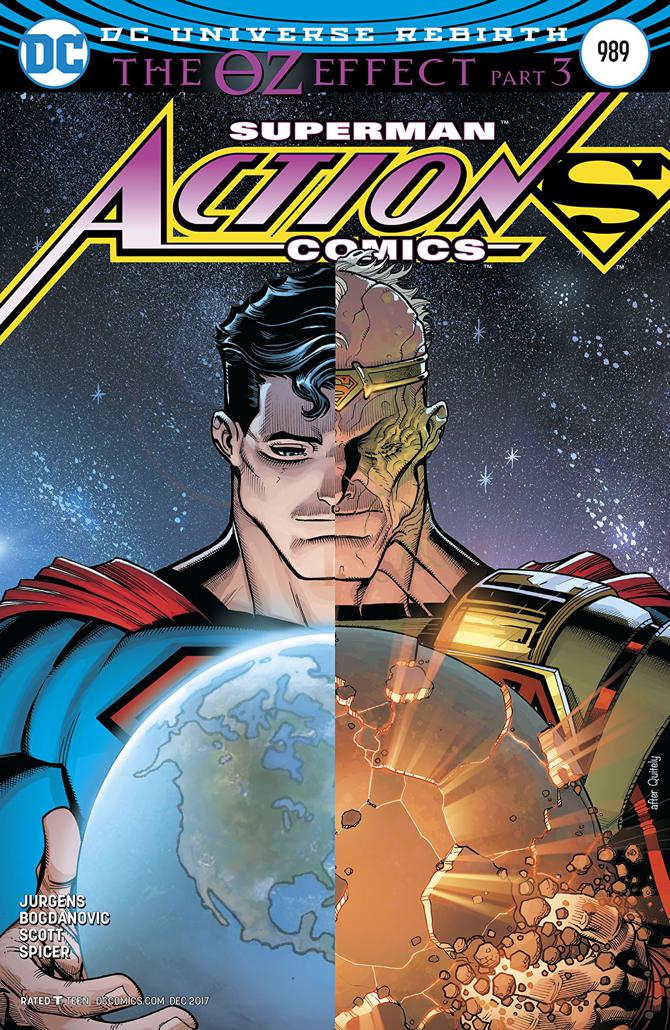 The fight between hope and pessimism continues to grow more personal, deadly, and reaches far and wide for Superman and his family. The Oz Effect Part Three focuses on the far reaching effects of Oz’s plan on why humanity shouldn’t be saved and should be left to its own damnation and Jurgens hits the notes heavily with tension and a situation ripped straight from our own headlines.

Oz’s supporters continue to strike in very specific ways all across the globe and this particular instance takes aim at the Daily Planet with most still inside surveying the damage and caught in the crossfire of a terrorist getting into the building! Jurgens takes the best of both Superman and real world stakes with the event of an Oz triggered person storming the Daily Planet with a bomb at the ready.

Juggling the main plot of Superman with equally interesting dialogue, he’s still coming to grips with this deeply jaded figure that could very well be his true father and Jurgens reinforces what defines Superman as acharacter even in the face of adversity and personal turmoil. He’s still going to go out into the world and do what’s right for humanity…even if humanity doesn’t repay him that same kindness back. That kindness being unpaid is shown in a disaster level page from Bogdanovic and Spicer that grabs multiple atrocities running all over the world that stun Superman and propel him into action. Jor-El continues to be the proverbial wet blanket for Kal on his ideals for humanity as a whole, he’s facing one of his biggest challenges here as the World comes apart at the seams all orchestrated by Oz.

Throughout the issue Bogdanovic and Scott use the inks and colors greatly for every scene from the Fortress of Solitude with Kal and Jor-El, to the offices of the Daily Planet where a tense situation is playing out where Lois and Jon get into the thick of what “The Oz Effect” is about. Jurgens writing Lois as a quick thinker that’s trying her best to keep the madman at bay while formulating a plan that’s also piecing the threads to larger threats at work. This battle of the brains plays out through multiple angles and people trying to intervening to failed results. It’s dialogue heavy and the art team capture the appropriate emotions and  focus as they narrow in on the characters. Spiked with tension as a very real human threats are forced between all members of the Super Family and those closest to them, the pages begin to share the spotlight with each other as Jurgens handles multiple instances that takes advantage of the situations the family finds themselves in. Superman is in action putting the action in Action Comics by stopping missiles at high speeds and dismantling them on the go, with Bogdanovic and Scott inks giving us the feeling of the Man of Steel zooming through the air.

Leigh’s letters provide the best cues for sound effects and action oriented panels and they happen quick, fast, and in a hurry because Jor-El is making himself known like never before as the secret to both us and the DCU characters that are tied to him become aware of this knowledge and Jurgens and the art team do so many small things to give us the proper feel of this father turned bad. From his attempt at “saving” the day and the TV monitors playing off of the deeds he’s done when he introduces himself to Lois, it’s all tying into the new ground Jurgens is breaking with Jor-El and continuing plots from previous arcs.

Jor-El’s scheme to dismantle humanity by allowing people all over the world to revel in their basic instincts continues in Part Three as the Superman Family comes into his line of sight in their own way. The themes of this arc are some of the most timely they’ve been for Superman and as one of his most personal fights continue, you can’t help but feel like this villain isn’t something you can stop altogether because of the writing that’s showing, there are some points to be made about our own world inside these pages. Bogdanovic and Scott bring on both types of conflicts physically and mentally for our characters and they look great coupled with Spicer’s colors that set the scene no matter the location or what’s happening on the pages and panels. The Oz Effect continues to bite at everything that makes Superman who he is, and the ongoing struggle against those ideals with his usual superheroics make this one of Action Comics best stories yet.