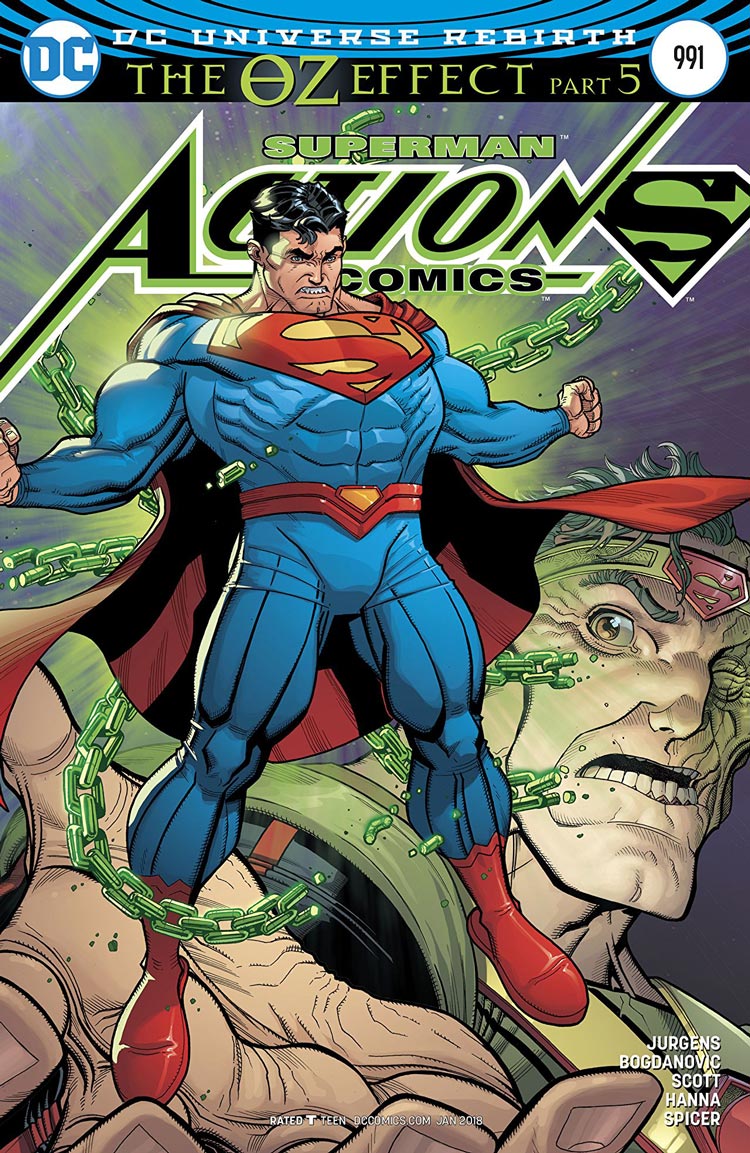 The finale to one of the most controversial Action Comics story for some time reaches its no hold barred conclusion that acts more like a definitive end to Superman and this journey than an overall conclusion to “The Oz Effect.” Nevertheless it’s a thrilling conclusion that lets Jurgens put everything he’s written into his Action Comics run thus far on the table for a finale worthy of an arc of this magnitude.

Picking up immediately off of the heels of last issue’s Super Family meeting, Earth is doomed… and there’s nothing Kal-El can do to stop it. The battle of hope vs. pessimism has been an ongoing struggle throughout “The Oz Effect” and it reaches its finale as Kal and Jor-El have their say about the state of the world and what’s to come.

Bogdanovic immediately captures all the appropriate expressions for each member of the Super Family and the Spicer colors do well to define the sides and similarities between them. Bogdanovic draws an enraged Kal who has had it with both humanity collapsing and his father seemingly behind it all in the name of showing how humanity truly is whether Superman saves them or not. Jon is cautiously trusting optimistic of his granddad’s words while Lois looks on confused with the developments transpiring.

Spicer on colors always makes sure the big red and blue can be seen on every page, even when the background is ill-suited for the positivity and focuses more on the heavy shadows and grimness stemming from Scott and Hanna assisting Bogdanovic on inking.

The meat of this issue stems from Jor-El and Kal journeying to Oz’s Fortress that has been the scene of several high profile moments in the grand-spanning DC Rebirth storyline, seen in Detective Comics, Superman, and other titles featuring Oz’s interference and commentary.

None of that no longer matters as Oz takes Kal through the fortress through blasting and Kal takes him through through punching. Kal remains skeptical throughout the exchange as Oz guides him through the terrible things he’s done to reach the good place of saving his son.

Bogdanovic and Spicer continue to remain in sync as they orchestrate blasts and punching throughout the dialogue opening up between the two figures and switching up the colors at a moment’s notice when Jor-El unleashes kryptonite and heat blasts when needed. As they slowly make their way through each room, moments from both Superman and Action Comics come into focus and Jor-El’s actions are given a new light by Jurgens.

What was once thought to be sinister and foreboding is that of tough love and stern leadership to wipe away potential threats to the Superman Family. Jurgens writes the father and son as two people seeking to do what’s right in their own way.

Bogdanovic sells Jor-El’s sympathetic arc as things begin to wind down on the threat and discovery of Mr. Oz. Throughout DC Rebirth, Mr. Oz has been an enigmatic figure that’s haunted several DC characters to some capacity and the slowly creeping unraveling feels both personal and not at the same time.

While the threat isn’t limited to just Superman, at the end of the day this was a long spanning Superman Story, an almost prelude to Doomsday Clock? The closing pages do a lot to lend to that theory, I won’t give away what happens but there is a lot of warnings about what’s to come from Jor-El and Spicer makes the color blue look dazzling.

Superman reflects heavily on what’s transpired and for good reason. “The Oz Effect” juggled several plotlines: Humanity and her true colors, Superman vs. Mr. Oz, and what’s truly behind Jor-El’s turn away from humanity. Jurgens handles these threads greatly in some regards and naturally has to let one, the humanity plotline go and into the backbone of the book because that’s what Jor-El wanted to instill in Kal…the weaknesses of humanity.

Superman isn’t that person and no one can sway that, he’s the Red and Blue Boy Scout that will always do right by us, even when we aren’t doing right by him. Bogdanovic and Leigh capture that with one of the more bittersweet pages that hit too close to home and detail why we’ll always need a Superman around. The world is filled with evil of all sorts both otherworldly and real, and Superman may falter on his mission to save anyone that needs it, he still gets the job done and pushes those thoughts back.

“The Oz Effect” finale puts the conclusion to a long standing story to rest, but also gives rise to another one as the mystery of Mr. Oz is over but there’s a lot more to look forward to on the horizon. Bogdanovic has carried himself fantastically throughout this arc and delivered the kind of quality that is suitable for Action Comics.

With this arc in particularly Jurgens has given us commentary on 2017 underneath the guise of a Superhero Story and while the super-heroics close out the finale, this arc has messages throughout about Superman and his role as a character in the same breath.

“The Oz Effect” challenged Kal-El and his family like never before and the bittersweet ending feels more like a proper finale with enough strings attached to keep you coming back to see what else is in store for the Super Family.