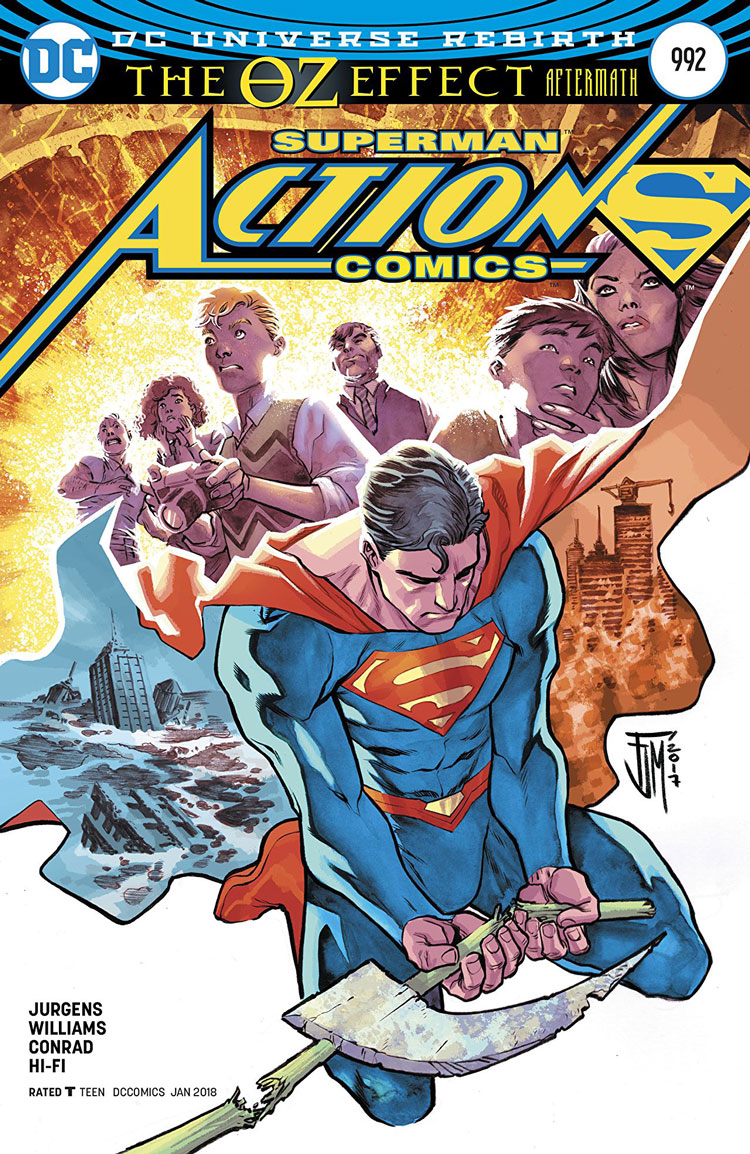 “The Oz Effect” has left Superman in a desperate place. In this aftermath issue, Superman does some soul searching about the events concerning his father and what his attack on humanity means for Kal and if this is truly his legacy. The aftermath of Jor-El’s assault has left both a personal and wide spanning scar for the House of El and it’ll take a trip across the DC Universe for Superman to get the type of closure he needs.

Still reeling from everything that’s transpired, Superman does some investigating of his own with Kelek telling him what he already knows. Jor-El, his father, is the one that was behind everything and that throws Kal-El into a state of confusion and lack of awareness. Jurgens gives Kal plenty to think about in caption boxes spread across the pages of Kal lashing out in anger about the truth he doesn’t want to hear.

Conrad does good work on showing Kal slowly but surely reach the conclusion on his own through his eyes and is more than suited for drawing Kal when he lashes out. Conrad plays with the pages and keeping the focus on Superman and each guest star that helps break the book into acts of sorts.

Batman is the first to visit Kal given the circumstances and rightly so. Bruce has had his own parental issues not to recently (See: The Button Crossover!) and it pulls on the larger connections to ongoing plots at work in the midst of Kal’s inner turmoil of his father being less than super. The dialogue heavy issue provides deeper insight into some of the conversations that “The Oz Effect” incorporated into later chapters. Jor-El’s attack and disappearance has left Superman not exactly his normal self and is now asking questions about the very nature of being Superman.

Action Comics has been delivering on Superman specific adventures and Jurgens continues the trek across the DCU with a visit to the Daily Planet. Lois is still in play as the wife that can hold her own when it comes to work and her husband’s other activities. Conrad does a good job of filling out backgrounds and giving environments the view of not looking barren and given how we’re exploring the larger DCU as the book goes on, it’s good for the art to be diverse as the locations.

Hal Jordan is the last person to help Superman on his journey of rediscovery and the Hi-Fi colors shine through in the panels. The Green Lantern section has Kal bright and blue with the green coloring making him stand out. After discovering a surprising hint on where to go next in his adventure, Superman makes a play for the sake of his journey that could result in being similar to “The Button” crossover or at least his version of it. The last two pages setup the next story arc with little information and the return of two characters that’ll be sure to make fans cheer and look forward to this time traveling adventure to Krypton and beyond.

“The Oz Effect” aftermath is lingering through Kal’s mind as Jurgens and Williams transitions Superman into another arc that’s sending him on another personal quest to put his mind at ease given how everything is on the edge for changing with him asking is what he’s doing worth it in the long term? As closure to “The Oz Effect,” it’s not as proper since they have to move pieces for the next arc but it’s a serviceable issue nonetheless. Conrad’s pencils are spotty in some areas but the Hi-Fi colors make everything presentable and the Leigh’s lettering does the job in the moments that demand for added emotion and emphasis.

Action Comics is reaching heights of extremity with the legendary issue #1,000 in sight and stories that are making Superman ask bigger questions and revisiting moments that were thought to be nothing more are good reason for the direction of Action Comics.