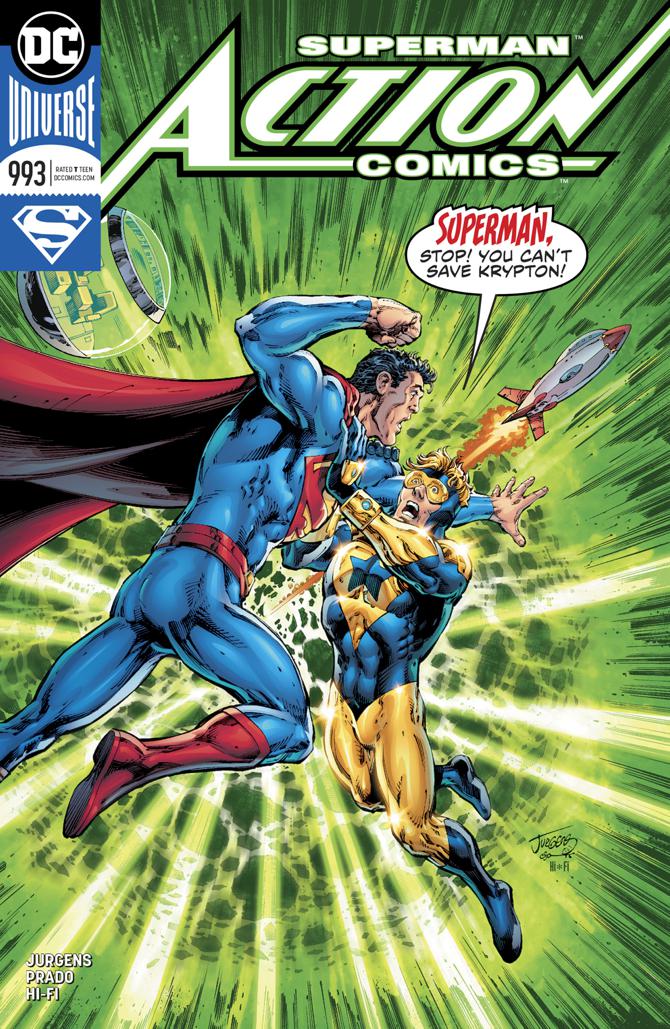 Booster has had a tough few years on the newstands. His solo title disappeared in the Flashpoint Paradox, his New 52 JLI title was short-lived, and he seemed a man out of place even more than usual. Aside from non-continuity turns in Bat-Mite and a Flintstones special, we have not seen Booster since Convergence almost two years ago.

Which makes this issue all the sweeter in its tone and feel. This issue reads as much like Booster Gold #48 as it does the latest Action Comics tale. Booster gets almost as much panel-space as Superman as the former chases the latter through time to Krypton.

Not getting caught up in past history, though (no pun intended), this issue also serves as a bit of a Booster Gold: Rebirth. Reintroducing the important set pieces of Booster while not leaving the reader with a feeling that they missed a beat.

The tables are turned this time out as Booster is questioning Superman’s seemingly irresponsible choice to go back in time to find out the truth about the mysterious Mr. Oz (whose identity was recently unveiled in a story worth reading if you haven’t).

That this issue also sees Jurgens return to penciling for a couple of issues solidifies the feel of this as a continuation of Booster Gold’s adventures. Jurgens’ layouts are dynamic and focused on movement. Capes flow, figures lean forward as they move, and Superman always shows his strength and grace in any pose.

We also get hints of the overall time troubles in the DC Universe through a stellar double page spread in which Superman sees fragments of times that may be, and those that never were.

With a lot of pages in outer space or featuring explosions and light, a lot of credit for this issue has to go to Hi-Fi. They bring an exciting color palate, clearly defining time steam colors and energy patterns, while always having our heroes jump off the page.

Letterer Leigh keeps the eye moving around the page and ensures a clear and easy change of voice between the pages narrated by Booster and those narrated by Superman. His placement is good to leave the art open and keeping the pace of the story.

This issue kicks off the arc that will carry us most of the way to #1,000 and we get a lot thrown at us in these first pages. With appearances by Flash and a few other recognizable faces, this issue casts a wide net in its appeal.