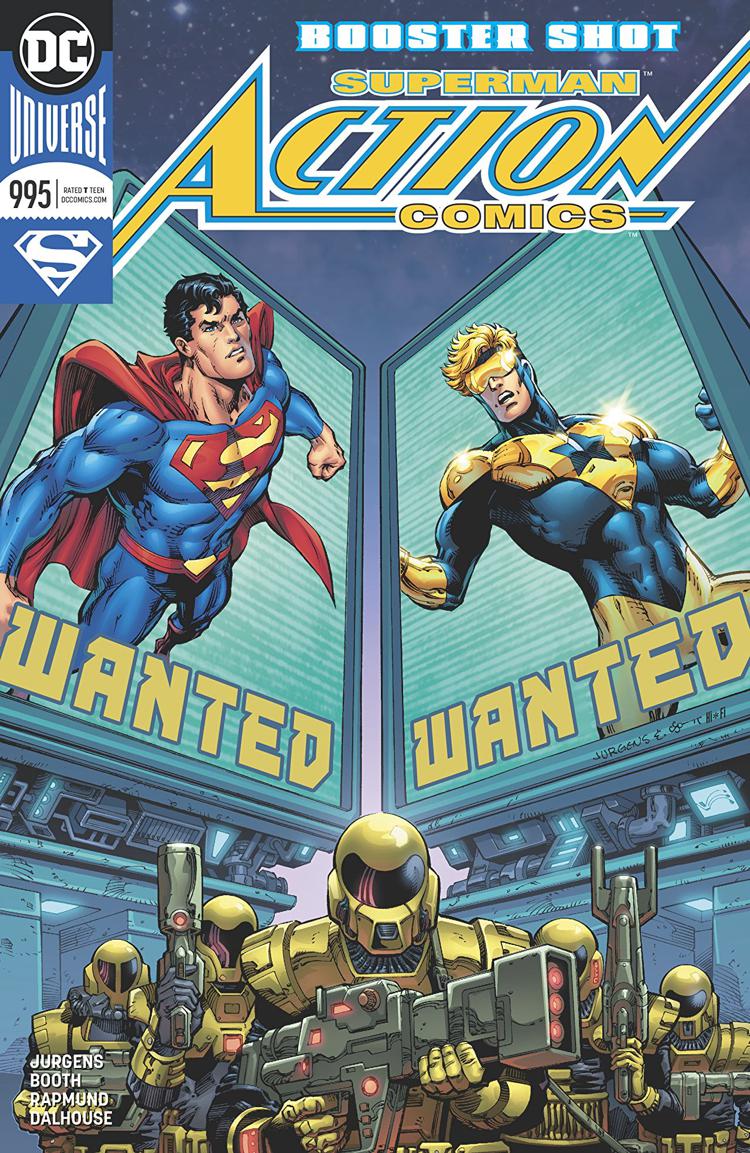 The “Booster Shot” story arc continues its time traveling mayhem on both Superman and Booster Gold with the emphasis on Booster Gold this time around as we focus more on Booster’s setting of the 25th Century!

While the story is Superman heavy through and through, the focus on Booster Gold is relevant as ever given their surroundings and Jurgens finally has a chance to write the character again. Still reeling from the displaced timestream adventure and newfound predicament of being in the 25th Century, specifically in Booster’s Home City. Jurgens gives Booster full reign here as we’re in his territory and the caption boxes detailing his journey thus far and his personality shines through the words. Throughout this Booster Arc, Superman has gone through enough as he’s seen different time frames and histories of his life and what could’ve been. Jurgens humbles the two with this breather to plot out the next move and provides Booster much needed character development.

The 25th Century allows for Booster’s way of life to be on full display and Booth utilizes all of the panel space to show every inch to dive into scenes. Different things come together with the haphard like window panels that cover many sides to the battle and the growing issues that are stemming from both Superman and Booster being in this timezone. Booth gives the chapter an invigorated sense of style and sleekness with his pencils. Mainstay inker with Booth, Rapmund provides subtle inking to the big action set piece that goes on for several pages and the panels are all at work with Booth in play showcasing expressions with range. Dalhouse keeps the colors metallic style and stresses the power of Superman’s heat vision as he battles the Eradicator Bot, all under the moonlit night providing cooler backgrounds and more emphasis on Booth’s horizontal action and fluidity to our heroes.

Jergens sets out to put our heroes, both present and future through their own challenges as we keep up with Lois and Jon dealing with the crisis of family matters. Jergens does well capturing the voices of all those involved and inching the plot forward on both accounts. Lois and Jon’s adventure is obviously less bombastic and action packed than Kal and Booster’s journey but there’s a sense of the plots having a connection as both sides of the Superman Family are dealing with connecting themes of family and discovering the truth, no matter the cost.

The inner dialogue of Booster confirms him as the main character of sort for the issue and the back half of the issue does well to add to this. Booster gets a hard hitting reminder of his roots and Superman finally gets to realize more about Booster himself and why he is the way he is. Booster Gold should come out of this arc as a beloved hero thanks to Jurgens and the reestablishment of his future hero with a heart of gold. Taking the talks of family and what you’ll do in service of others are laid out by Skeets and it boosts Superman’s understanding of Booster and jumpstarts his renewed heroism in him and it comes in handy as Booster deals with some family trouble of his own.

Booth, Rapmund, and Dalhouse work well together throughout the issue. Despite characters under Booth’s pencils are more angular and skinnier than normal, the team does a lot with the panel space and capturing scenes with characters being accentuated as the scene calls for it. The coloring from Dalhouse is a real winner here as on a panel by panel basis the coloring can change on a dime.

Throughout Booster Shot, both Superman and Booster Gold have seen the harm time travel can cause if left unchecked. Superman has seen the alternate history of Krypton with added baggage and Booster has gotten a necessary character development through a chapter that focuses on his side of what time travel and family history mean to a hero that you think you know. Booster Shot as a story arc keeps us the continuation of being a superheroic fun romp through time that continues the aftermath quest of Superman and his search for answers. Booth, Rapmund, Dalhouse, and Leigh bring a more stylized and action-oriented change of pace to the issue and that’s just the beginning as the duo’s time travel troubles only seem to be mounting given the final page…