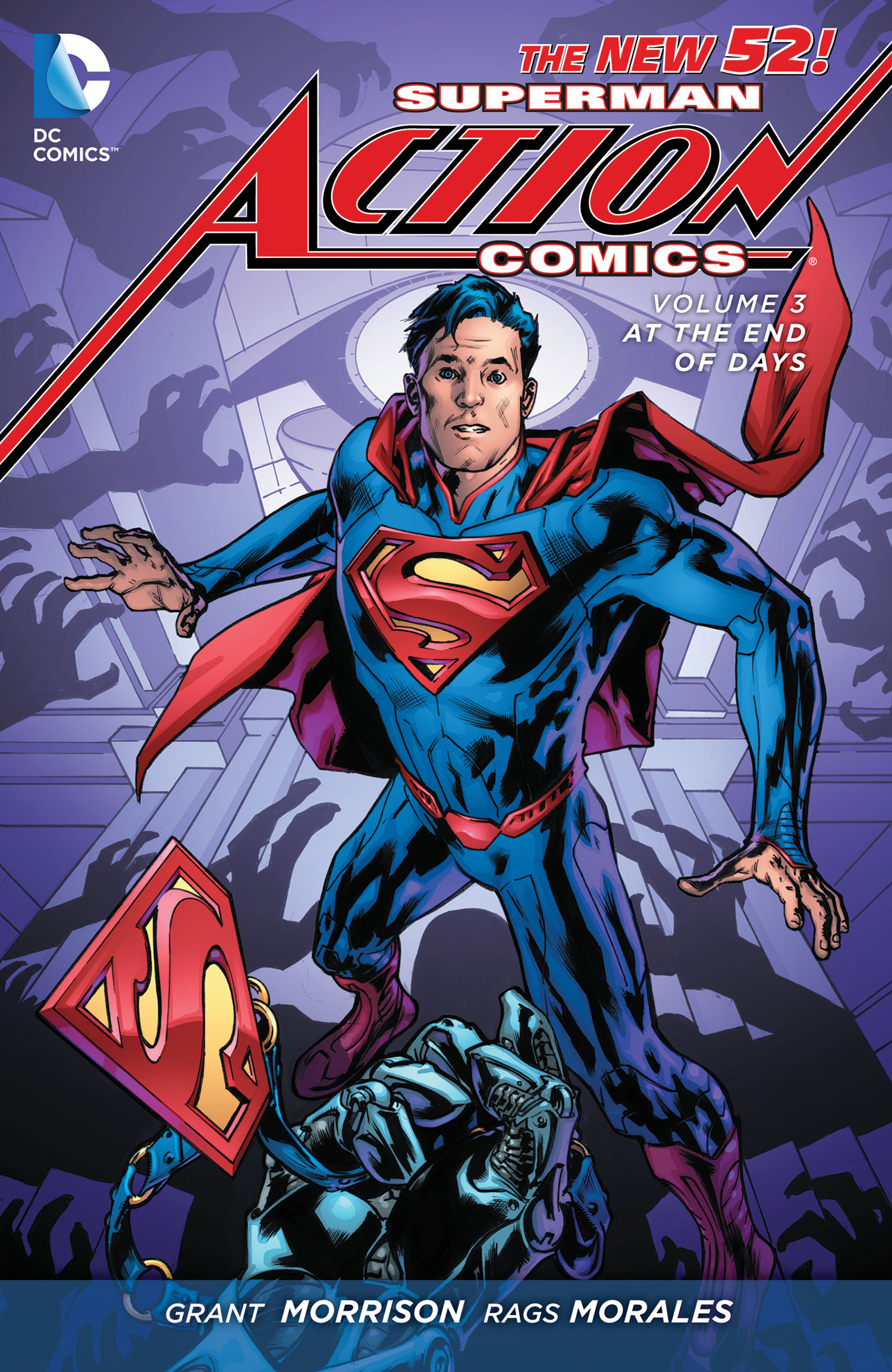 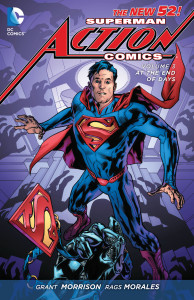 Superman thought Mr. Mxyzptlk was bad. He was a walk in the park compared to the Fifth Dimensional terror that is Vyndktvx. Forced to battle his greatest foes at every point of his short career — from his senior prom to the modern day — the Man of Steel may have met his match at last. Even the appearance of a Legion of Super-Heroes and the Cometeers may not be enough. So, how does it all come down to Clark Kent’s old landlady?

Grant Morrison has run the gamut as a writer, handling straightforward corporate super-heroes and more arcane creator-owned material with equal verve, but never before have the two methodologies so prominently overlapped as in the New 52 Superman. As a 19-issue arc, Morrison’s Action Comics run is something of a grand experiment in interlaced stories, time-tripping, and cameos that lead into important scenes and back again. But as a 6 issue compilation, Volume 3 doesn’t really stand on its own very well. What would otherwise be the culmination of a complex set of circumstances devolves into a strange collection of one-shot stories that seem to lose steam as they reach their end.

Part of the problem is that the monthly comics were a combination of lead story and short back-up, the latter of which was frequently tied to some element of the main story to add some necessary poignancy. As this collection shuffles the back stories together after the conclusion of the story, at the back of the book, they all end up feeling like more of an afterthought than a well-conceived particle in the overall volume — a shame, because a few of these stories are quite momentous. The tale of how Universo rose to power in the 31st Century is clever and referenced somewhat importantly 60 pages earlier, and the last chance Clark has to say goodbye to his father, while not living up to a similar moment in Morrison’s own All-Star Superman, is nonetheless heartwrenching. That all of these stories are written by Sholly Fisch, not Morrison, is likely the reasoning behind their jettisoning, but perhaps they would have been better served in their own volume, or included in a collection with the current Adventures of Superman digital series. Either way, whatever relation they have to the main story seems wasted by this presentation. 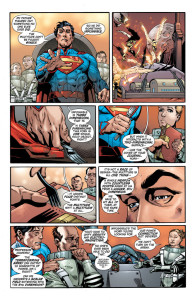 Morrison’s own narrative is not without its moments, in particular the first two parts of the volume. Superman’s travel into the Phantom Zone and reunion with Krypto is exceptional, as we get both a significant emotional moment and sci-fi action in a single story. Likewise, the opportunity to showcase the Man of Steel’s intellectual side in the battle with the Multitude on the planet Mars is one of the best chapters in Morrison’s entire run, giving readers a sense of where Superman is today mentally and how bystanders view him. He is in essence simultaneously the template for, and reflection of, Doctor Who, the visitor who walks among us but is not of us, and is in fact, better than us.

Unfortunately, the remainder of Morrison’s story devolves into a messy, somewhat self-referential (without the original source material available) story that throws so many elements into the mix that it’s hard to keep track of who’s who, and why any of it is important. Captain Comet makes a reappearance out of the blue, with a band of heroes called the Cometeers who are essentially the Wanderers from the Legion of Super-Heroes mythology. Except that they aren’t, and we never get more out of their appearance than a brief fight. From Lois Lane’s niece to some version of Doomsday, characters flit in and out with little explanation or backstory, to the point that it makes it hard to believe any of this story will stick. So much of it is so far from what occurred before the New 52 (which I have no problem with) but not interesting enough to warrant the changes. 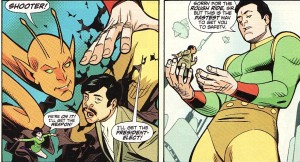 The saving grace of the title may be some of the art, if taken in story by story. Rags Morales delivers a Clark Kent who has experienced the greatest loss of his life, and a villain in Vyndktvx who looks like pure evil in all his many forms. Travel Foreman’s foray into the Phantom Zone is creepy and clean all at the same time, while Chris Sprouse was literally born to illustrate both Superman and the Legion of Super-Heroes. Unfortunately, mixed up in a single collection like a blender, these artists clash with each other stylistically and rather than reinforcing Morrison’s grand vision of time being broken, they only serve to break the narrative even more.

As a finishing arc to a greater run, Action Comics Volume 3 holds more promise than as a single collection. It certainly couldn’t be read as a coherent story all by itself, although some of the individual chapters stand out significantly to that effect. Props to Morrison for trying something new with Superman, and the DC for letting him. But for my love of the Man of Steel, I will likely fall back on the master’s All-Star run and leave it at that.