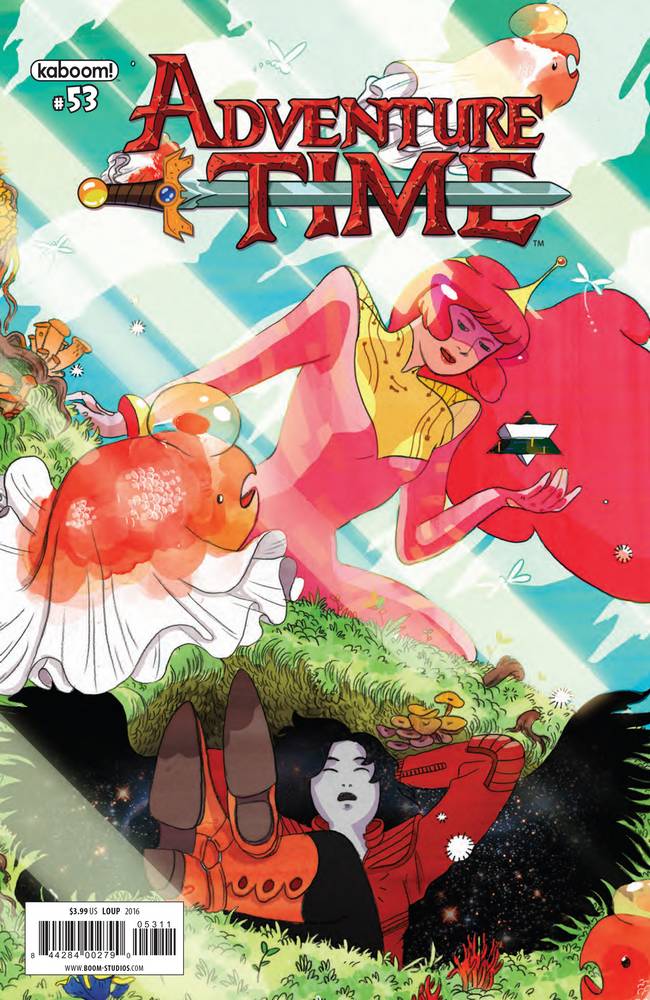 Soul-sucking demons are a fan of pastries just like any of us.

Matters for Jake are looking rather grim, as he runs around the 27th Dead World to help Finn get his youth back. Ghosts are on his tail at every turn until he’s cornered and has his own youth drained. With his old dog wisdom, Jake turns the tables for himself and Finn while helping us remember that there’s a heart underneath that magically stretchy fur.

The strength of Adventure Time as a comic is that it fits seamlessly and canonically within the universe of the cartoon. As such, there’s no disconnection between lore and storytelling in either medium. Such a quality is evident in issue #53, as Death, Hunson Abadeer, and the Governor of the 27th Death World, all some form of other- and afterworldly ruler, are all present. These characters and their interaction flesh out more of the Adventure Time universe while also providing a framework for the main story.

Christopher Hastings tells a story that builds yet another corner of the Land of Ooo with trademark Adventure Time comedy and thoughtful reflection. The opening pages of the story frame the plot using a vital element and perfect comedic timing. Hastings crafts wonderful one-liners and humorous asides between characters. The strong points of this issue are in the opening and later when Jake suddenly turns introspective, scenes which remind me that Adventure Time is a piece of media that is both funny and that allows for moments of emotional depth.

Ian McGinty and Maarta Laiho work well together on wacky proportions and evidently emotive characters. My favorite part of the issue was the ghosts. They have a color scheme that screams “I’m dead!” in muted, wispy green and blue hues. The ghosts also provide a nice artistic framework in the middle of the issue compared to the beginning and end, both of which take place in the living realm. As Jake is traipsing around the ghosts’ world to get Hunson’s cauldron, it looks like he’s in a place devoid of life, scrambling around as the one living being. McGinty and Laiho use some cool techniques to paint the distinction between the living and the dead that also works with Hastings’ use of comedy.

This issue has some great touches that expand on the larger Adventure Time mythos. On its own, it’s a fun and engaging story. However, readers may be a bit confused if they haven’t picked up the previous two issues. That being said, this issue has tiny moments of humor that hold the heart and spirit of the entire Adventure Time universe. If you have been reading thus far or if you just like a wacky and random adventure, this issue is for you.