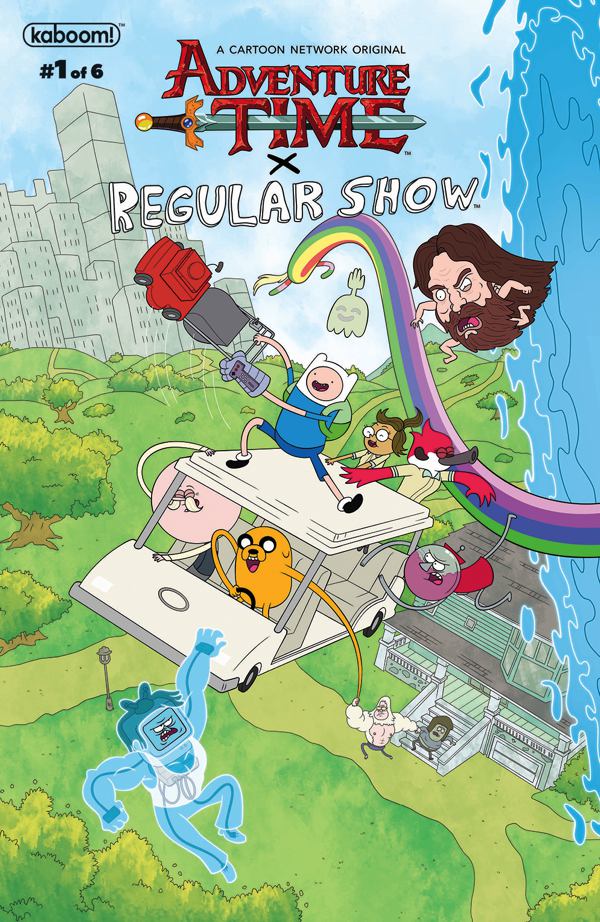 As Princess Bubblegum creates an unending portal to limitless power, two worlds collide! Finn and friends find themselves in an alternate reality in this exciting first issue of Adventure Time/Regular Show!

McCreery definitely has fun with the concept. I love the situations the two groups of characters are placed under. The Master of Division is hilarious. I love Princess Bubblegum’s dictator-ness showing its face once more with her unending portal to limitless power. I love the inclusion of the Ice King and Lumpy Space Princess on their end, since those two are some of my favorite characters, especially LSP. She just makes everything ten times better.

Putting Mordecai in charge of a bunch of literal toddler dictators is hysterical. I love the babies and I love how they’re honestly super adorable, even if they’re terrible mini dictators. I love the classes that both Muscle Man and Pops teach during the issue. They’re both classes that feel strange for the characters but oddly go well with them. I also love the reaction that the Regular Show crew has to the Adventure Time folks. The misunderstanding as strangers hurtle into their world is fun to watch and I can’t wait to see what comes of all of it.

The art by Di Meo is beautiful. Di Meo understands how to draw in a style that both works well with Adventure Time and Regular Show. I love the facial expressions Di Meo brings to the table as well, creating a bounty of fun frustrated and angry faces. I think Di Meo also does super well with the little dictators as well, they’re just so fun to watch.

The coloring by Lafuente is stellar. From the bright, solid colors of Adventure Time to the more pastel, toned down colors of Regular Show, Lafuente obviously took the time to understand both the shows and gives continuity for the style of the shows to the comic crossover. I appreciate that attention to detail.

Adventure Time/Regular Show is a fun crossover event that brings two insane worlds colliding into one another. If you’re a fan of Adventure Time or Regular Show, you’ll definitely like this comic.