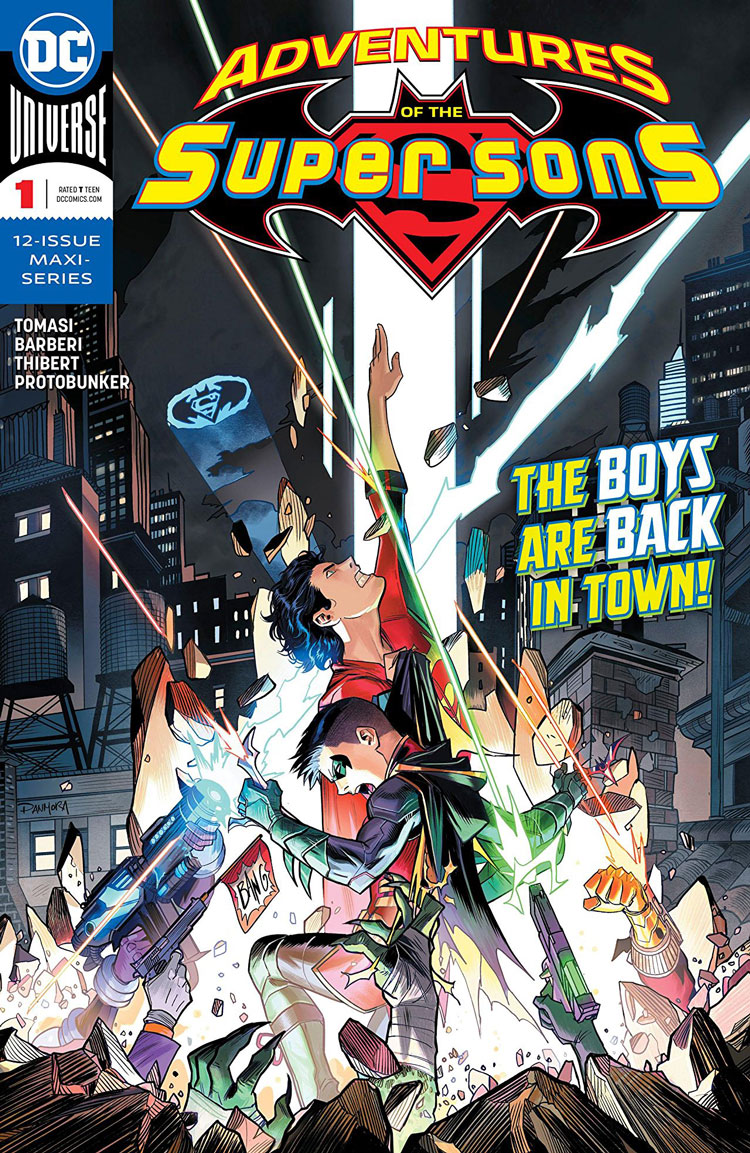 Superboy and Robin find themselves the targets of an interstellar team of youths.

Adventures of the Super Sons #1 kicks off a twelve-issue limited series that follows Damian Wayne and Jon Kent, the sons of Batman and Superman. In this innaugural issue, Damian and Jon hang out, fight a little crime, and encounter the Gang, a group of kids from space who resemble child versions of a variety of super-villains.

Continuity in super-hero comics is such an odd duck. More often than not, it’s an elaborate narrative superstructure designed to get readers to buy comics they don’t like in order to keep up with a big story that might or might not be going anywhere interesting. Here, continuity actively works against this comic, which is a perfectly charming little thing, but has the misfortune of being orphaned by the DC Universe at large.

Adventures of the Super Sons takes place in the past, nuzzled snuggly (As an editor’s note helpfully informs us) between Super Sons #16 and Superman Special #1. It has to so exist because the world of the Superman comics very abruptly shifted this summer, leaving the Super Sons without in-continuity ground to stand on any longer.

So Adventures of the Super Sons is a stand-alone adventure, a tale of a universe that existed a couple of months ago, but now exists no longer, and asks you to enjoy it on its own merits, despite being irrelevant to any grander design.

At least in this first issue, the merits are considerable. The dialog is charming, with well-drawn characters. Sunny Jonathan Kent makes a delightful foil to dour, serious Damian, and the kid-oriented format of this adventure gives Damian a real chance to shine.

So often, Damian can come across as a bit of a twerp; a serious know-it-all kid in a world of grown-ups. When paired with Jonathan, though, he feels more authentically child-like, enriching his character and making him feel more familiar and less like a literary device. Jonathan, meanwhile, is eternally delightful. He’s fun and curious and enthusiastic without feeling like a caricature.

The story feels evocative of Silver Age DC comics, or at least, the version of Silver Age comics we like to remember. The kids face a villain, the Puppeteer, who has commandeered the gold Superman statue in Metropolis, then later face Shaggy Boy, a child version of the Shaggy Man, one of the classic Silver Age JLA villains. Damian, at one point, is trapped by a gun that shoots a device that wraps its victim in mummy-like bandages. It’s fun, light-hearted, and adventuresome without necessarily being too serious. It’s a well-crafted story that achieves exactly what it sets out to accomplish.

The art has a loose, sketchy quality, evocative of Calvin and Hobbes, that reinforces the childlike exuberance of the characters and the comic they inhabit. The kids’ facial experssions, in particular, are expressive and border on cartoonish. The color work is bold and fun, with rich primary colors contrasting with watercolor-like backgrounds.

All told, Adventures of the Super Sons #1 is a delight. It’s a fun, well-made comic that entertains even as it’s made to hover in an odd limbo with respect to continuity.