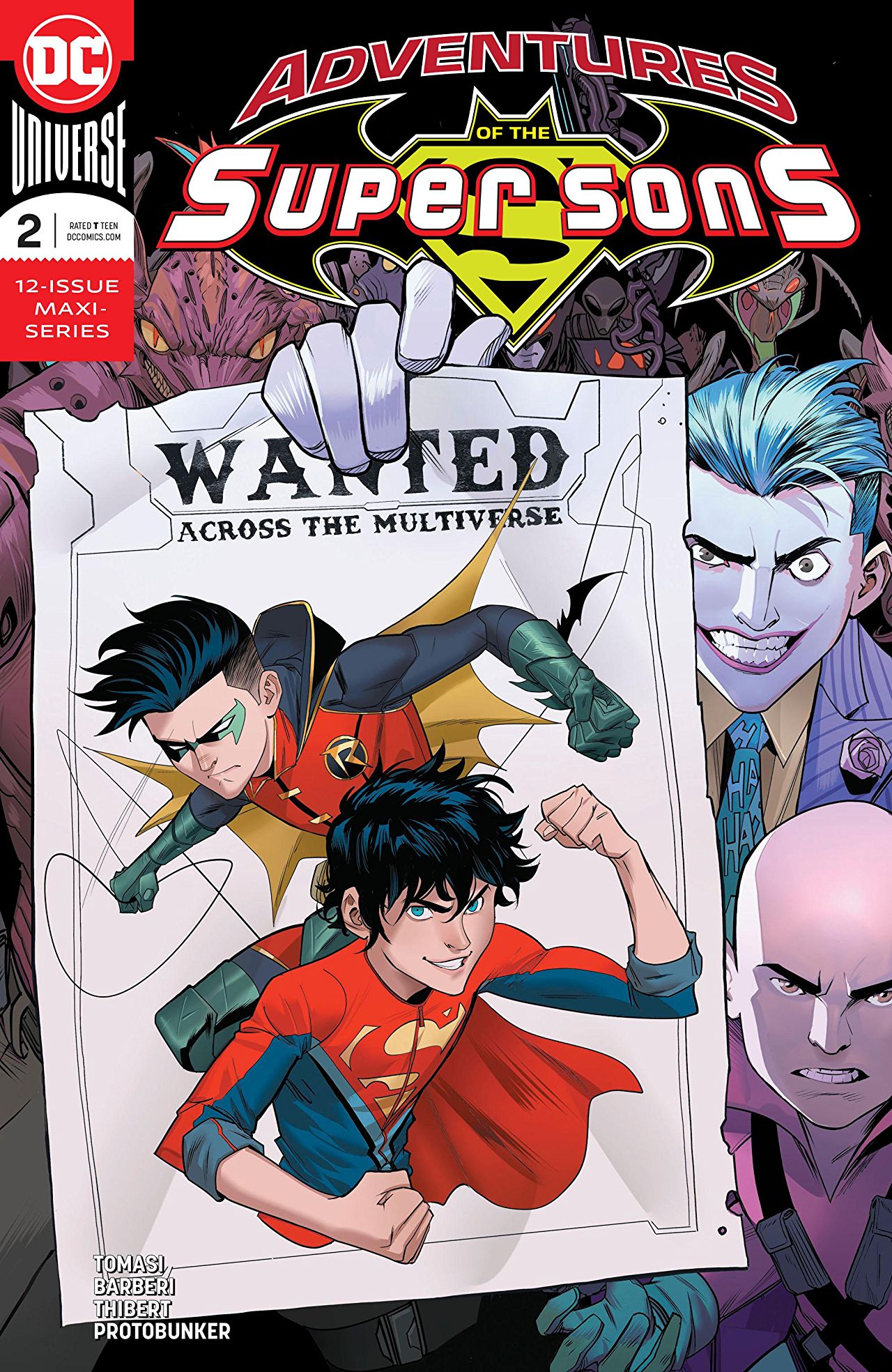 With a group of otherworldly kids cosplaying as villains, will the Super Sons be able to stop the children’s diabolical plot for total injustice? Find out! In this issue of The Adventure of the Super Sons!

The one-liners for all the villain kids are amazing. I love how much of a cheese-fest their lines are, you can just hear the old campy comic villain in them all. The use of puppeteer is a fun choice here. We get foreshadowing for it in the first issue, so it was cool to see that Chekhov’s Gun of sorts. I also love the backfiring of Superboy’s force field. I like that it seems to give him the upper hand, but is used against him in a creative way.

The art is great. I really love the hair Barberi and Thibert have given the Super Sons. It just looks better to me than the last run of the series. I also love all the art for Joker Jr. throughout this issue. While the writing for him also makes him an intriguing character, I feel like his arc would be less impactful without how big his suit feels on him, the reaction shots, especially the small ones, of his character.

The coloring is spot on for this comic. While Leigh still keeps the bubblegum pop colors for the most part, which helps lighten the mood especially given the events that take place in this issue, I like that there are some darker toned moments. Again, especially with some of the things that happen in this issue, it would feel weird if there weren’t a few panels with a more serious color scheme.

My favorite scene is the page where Joker Jr. drags Superboy away from the command center of the ship.

The door closes behind Joker Jr. and the unconscious Superboy, a worried look on Joker Jr.’s face.

“Doubtful, my manipulative friend,” Rex Luthor responds to Puppeteer’s pleas for mercy, for his life, an ominous BLAMM colored red and messy under his words.

The hallway is long, futuristic, cold, and quiet. There are no other words. Just Joker Jr. slowly dragging Superboy down the hall. A moment of silence and tension for what has just happened, for the true terrors these children could set upon their home planet.

It’s the kind of moment I don’t expect from Super Sons, which makes it more poignant. This starts a shift towards something with a darker tone than most of their stories feel and it would not have been as grim without this page.

Read the Adventures of the Super Sons. Please do. It’s a fun series that’s experimenting with more legitimate feeling threats and I feel that should be rewarded.