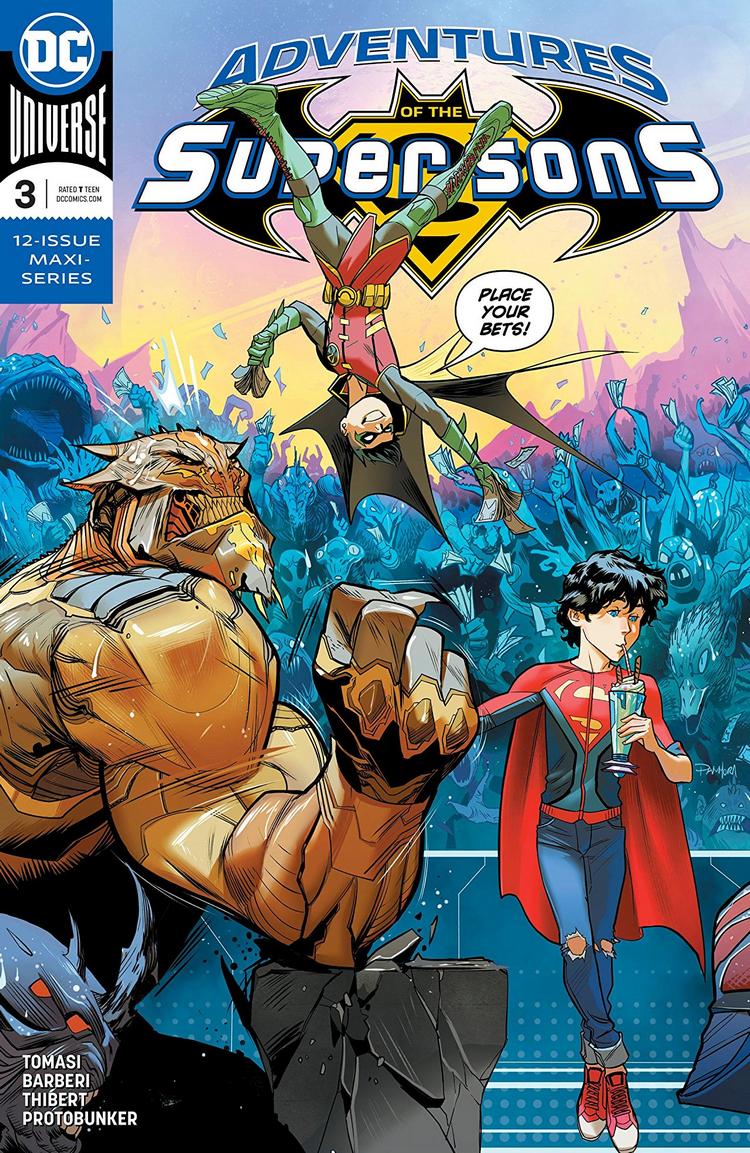 Kidnapped by a strange gang of children obsessed with villains, can Jon and Damian defeat the kids and get back to earth? Find out in this latest issue of Adventures of the Super Sons!

I like that they brought in a weird thing that happened to Superman that I’ve only heard tales of. The Red Blue Split’s from a really strange issue of Superman, that I think both new Supermen end up with a different girl in the end? Like I said, weird story, but I think it’s fun to take the cool elements of bizarre issues and reuse them to see what you can do with them. I like the fun with Kryptonite within this arc and I think doing the split was a good idea.

To be honest, I’m a little bummed with some of the bickering the Blue and Red Superboys do. I’m fine with fun banter between people who hate each other, but trying to do yo momma jokes to a split of yourself and teasing about a liking someone when they’re you and you know you don’t like that person? I don’t know, logic escapes these split Superboys, I guess, which I suppose is part of the human condition.

I’ll also say that the zaniness of the split juxtaposed with the kids super into murder trying to kill the Super Sons doesn’t blend well, necessarily. Both are great ideas, I like the legit going there of murder kids, that’s a really ballsy move on Tomasi’s part, and the amount this team gets away with when it comes to pushing the envelope with how much actual death you see in a kid’s geared comic is more than I imagined one could do. However, it does feel like it’s a bit of a whiplash going from intense murder kids to look at these two Superboys fighting with each other for kooky reasons because space rock science.

I do love the splash that’s basically Damian just kicking Braniac 6 in the face. Damian even times it with a good one liner. And Braniac 6 just looks so defeated by one swift kick to the face, it feels way more cartoonish compared to any of the other fighting in this issue.

The lettering in this issue is fantastic, Leigh did a superb job. From the coloring of boxes to show who’s talking, whether it’s purple for Joker Jr. or green for Rex Luthor, or the shaking text as a space ship slowly enters a planet’s atmosphere, there’s a lot of subtle detail put into the work. I appreciate that.

Overall, it’s not my favorite issue of the arc, but it ends on a note which makes me excited for the next issue, so I’d say read it if not to just keep up with the arc.