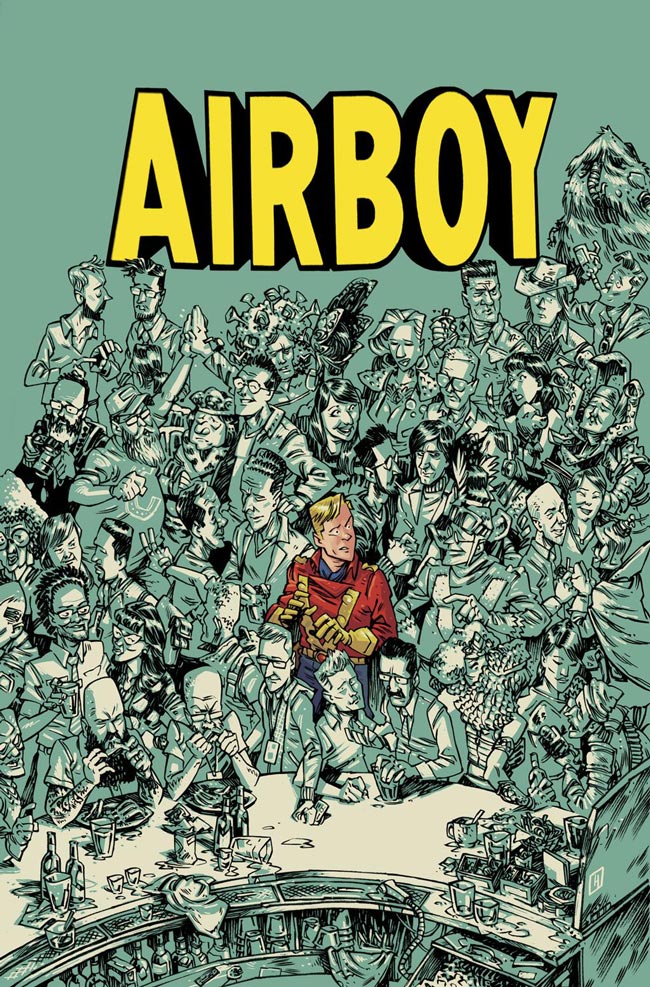 James and Greg have fallen down a hole and found Airboy at the bottom. Not the Airboy script. Not an old comic book. Airboy, live and in the flesh. And what happens next… well.

One of the reasons I gave Airboy #1 a 10/10 is because it was about characters who beat themselves down, when they’re acknowledging that on the page or not. It felt like self-flagellation, and a little like masturbation, and that sense of honesty made it a superior comic. But Airboy #2 took all of that energy and applied it to punching down on other people — transgender individuals who aren’t even characters in the book really, but background objects or plot devices. This gives the issue a 100% different tone from the previous one. And it highlights something that many fans don’t get about representation.

It’s not that terrible things can’t be done or said by terrible people in a comic book. Being a villain is OK. The characters of James and Greg alternately play that role here. What’s not OK is leaving the victim of that terribleness — name-calling, rape, any sort of dehumanizing behavior — without a voice or narrative agency. It’s not the terrible act in itself I find so appalling (although the proliferation of it in absence of the alternative is stifling to say the least). It’s that there are no consequences. No comeuppance. No voice for the people being abused. And when a community of people — transgender, gay, Black, women — are frequently put in the same position of being punched down with no ability to respond, it’s not acceptable.

Justice League 3001 #1 had a similar issue last week that I noted in my review, but at least with Guy there’s a chance for narrative reply. Because it’s an ongoing series, because Guy Gardner is a main character, there’s opportunity to counteract that book’s Superman’s contention. And because of an internet dialogue that occurred with one of the writers immediately post-release, I do believe that will happen now.

Unfortunately, in Airboy #2, this abuse (and believe me, calling someone a “tranny” and misgendering them deliberately is absolutely 100% abuse) is happening to characters without agency, without names, without recourse. And that makes it burn far worse to me. If the next page of Airboy #2 had been one of the women telling James or Airboy or Greg off and kicking them in the nads, the tone shifts. But instead, we just have another faceless community being dehumanized. “Just” is the operative word here. It doesn’t go farther than that.

[And by the way, if you don’t know, calling someone a “tranny” is not OK. Neither is “retard,” “faggot,” “cunt,” “kike,” or the N-word. Just want that out there in case anyone is still confused about that.]

I want to sit here and laud Greg Hinkle’s beautiful art and James Robinson’s sharp, self-deprecating dialogue in the rest of Airboy #2, but I honestly can’t. This issue isn’t about that anymore. It’s been overwhelmed by a transphobia that goes unchallenged narratively. It could be easy to say, well, the book isn’t about the women Airboy and the gents abuse, so why would the story shift them into subjectivity? Except that a) if the story’s not about them, they shouldn’t be in the story to be objectified. Women — transgender women — are not lamps to be repositioned in a room however you like and turned off when not in use. And b) now it is.

Now, Airboy #2 is all about those transgender women the book dehumanizes, and there’s no getting around it.