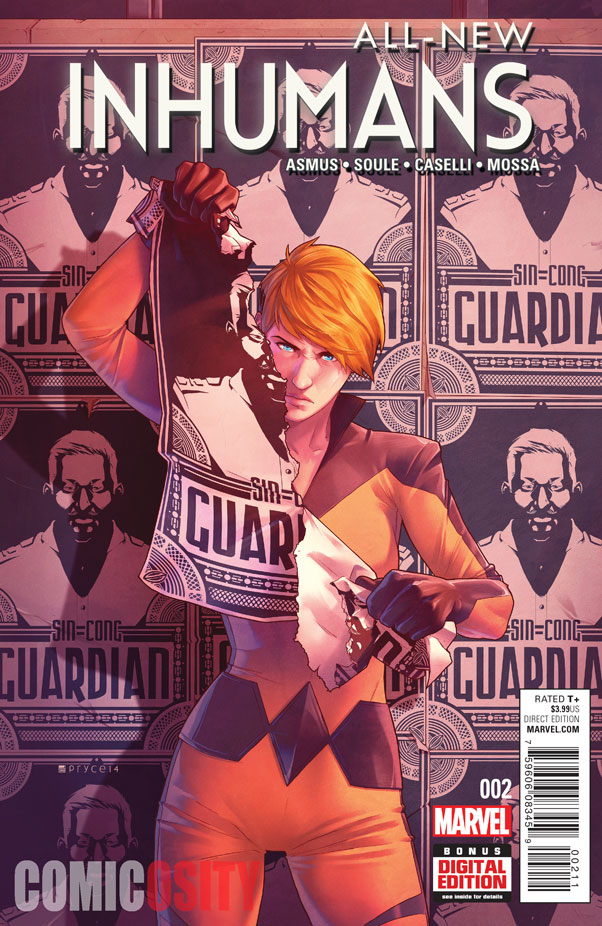 Crystal and her band of “diplomats” head to the Republic of Sin-Cong (Marvel’s version of North Korea) to investigate the fallout of the Terrigen cloud. Naturally, what they find is a darker situation than what the outside world knows about.

The Republic of Sin-Cong is an interesting choice for a setting for Crystal’s second mission in this series, as it brings this Inhuman title into some very “real” territory. Asmus and Soule aren’t just talking about Inhumans with this comic, they’re examining the propaganda and secrecy of totalitarian regimes as well, which makes this story hit a lot harder than a typical cape comic. The very real politics of a group like the Inhumans toppling a regime and leaving a void are discussed here and I was very happy to see that. This isn’t just a “get in there, beat up the bad guy story” by any means and the complex politics and stance of the Inhumans as diplomats is an entertaining angle. Crystal’s dialogue is fantastic, her regal similarities to her sister shining through, but Crystal does have a unique voice. She’s no Medusa clone, but she is tough as nails and the writers definitely make that clear in this issue.

Stefano Caselli nails the pencil work and Andres Mossa delivers strong colours in this issue. Caselli doesn’t miss at any point in this comic and I like emotion he projects onto the Inhuman characters in this issue. They see many troubling things, including oppression at its worst, and he drives home the emotional aspects of that nicely. He’s a skilled artist and he has a visually intriguing cast to work with, which leads to nice results for readers. Andres Mossa’s palette of choice suits the story nicely, with the Inhumans popping on the page compared to the flat, uniformly coloured world of Sin-Cong. The Inhumans are the stars of the show and their dynamic nature is captured well by Mossa’s work.

All-New Inhumans #2 is an entertaining read featuring some solid writing and great artwork. The Inhumans are an interesting group and Marvel is definitely putting some weight behind their brand with a creative team like this. I’m definitely in for issue #3 and I’m really enjoying seeing this deeper look at Inhumanity.