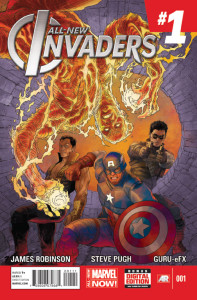 This book was a fun adventure mixing science fiction and World War 2 in a way that only works in the Marvel Universe. James Robinson brings his strong skills for writing convincing people as well as dramatic moments; Steve Pugh brings action scenes that were made to be posters. Throw in Namor punching Nazis and you’ve got yourself a party!

I wanted to review this book in particular because I am totally unfamiliar with the legacy of the Invaders team, and I’m mostly unfamiliar with the main characters. I know the basics about Namor, Captain America and Bucky, but a lot of their more recent history is lost on me. I didn’t know who Jim Hammond was until I opened this book. Therefore, I was very pleased with the focus on Hammond; I went from a total stranger to genuinely invested within 20 pages. The recap was the perfect hand hold to jump in blind, though I’m not sure the story makes as much sense if you didn’t read the All-New Marvel Now 0.1 special. Thankfully for me, I did, so I was super excited about Tanalth and why she was raising hell on Earth. Without that lead-in, she’s still a classic “show up and wreck stuff” baddie who gets her main point across clearly and effectively (by effectively I mean explosions).

This is a matter of personal taste, but I was saddened by the lack of Captain America. He’s hardly in the issue. His sudden appearance is rather jarring, and serves as a cliffhanger on top of another cliffhanger. The disparate plot points are only held together in any cohesive way by the strength of Robinson’s characterization and dialogue. The flashback could have been shorter to give more breathing room to the final reveal(s), maybe? My biggest criticism of the issue is that it felt two pages too short.  What can I say, I’m greedy.

Generally I don’t go in for “standard” superhero art – I like the weird stuff – but Steve Pugh draws such eye-popping prettiness that I had to stare on more than one page. The title page layout reminded me of what Jamie McKelvie did in the first issue of Young Avengers, so of course I was immediately smitten. Steve Pugh is very strong on the “iconic moment” – the hell-yeah holy crap superhero pose. I really dig the look and feel of Tanalth, probably because she reminds me of Big Barda. And Daleks. I can’t be the only one who thought of Daleks when they saw her boots.

Overall, this issue was a strong start to a new series that was enjoyable, accessible, and a bit too short. The double cliffhanger ending was unexpected, but I’m interested enough to stick around for the second issue. This story doesn’t fit into any kind of box, and being genuinely surprised by a superhero comic is a hard thing to come by these days. Next time: more Cap! Because, America! Pretty please!