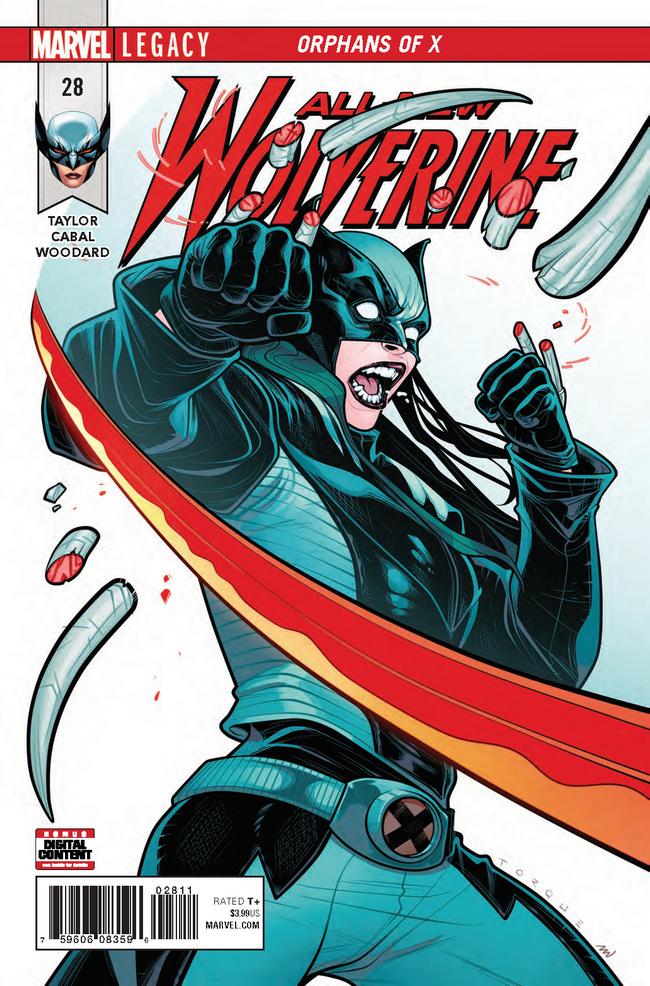 That quote from Gabby leads to an amazing panel that put such a smile on my face I HAD to share it.

I opted not to, deciding, instead, that it’s better for you to experience the results for yourself. I wanted to share it with you via the Honor Roll, but I decided I owe you an explanation that’s more than one panel, more than one paragraph of WHY All-New Wolverine #28 is worth your time and money.

I’m a sucker for fun comics, team-up comics, comics grounded in a shared universe, but not unnecessarily beholden to continuity. All-New Wolverine #28 (and, if I’m being honest, the whole damn run of this comic) is exactly that. All of that. No bag of chips, though, because that would leave greasy stains on the comic (or digital device), but definitely a fun-team-up-shared-universe comic that has emotional heft, visual pizzazz, and smart pacing.

Writer Tom Taylor has a knack for crafting familiar, comfortable characters that are as easy to visit as old friends, but they’re not overly burdened by history or continuity. You know what Taylor gives you, which is exactly enough for the story to carry weight and deliver impact. In this issue, without slowing for exposition or repetition, Taylor tells you the Orphans of X are hunting Laura Kinney (Wolverine), her half-brother (Daken), and anyone else with them, which includes Gabby, a clone of Laura who would be an absolute scene-stealer in a feature film, but is a magnificent component in All-New Wolverine #28.

Taylor has crafted such a wonderful supporting cast, but as wonderful as they are, Laura Kinney – Wolverine – leaps past them in every scene that Taylor writes for her. This issue, however, is a swing issue in the “Orphans of X” storyline that tidies up the supporting cast, lines up the action and leaves your jaw dropped on the final page.

All of that is brilliantly transformed from script (Marvel style or not, doesn’t matter) to printed page by artist Juann Cabal, colorist Nolan Woodard, and letterer extraordinaire Cory Petit. Cabal is an absolute treasure on art. He’s got a little bit of David Marquez in his work, and a sharp storytelling that feels like a joy ride. He masterfully guides the reader through the tale and capably packs panels with detail, characters with expression, and pages with dynamism. He also is smart enough to scale back detail when necessary, and knows when to let the characters reflect the spotlight. From the opening chemistry-inspired layout to the X-Men’s Blackbird screaming across the sky to the detailed regeneration of Daken’s arm, All-New Wolverine is FILLED with winning panels.

Woodard hits every note just right, clearly comfortable in his collaboration with Cabal. Aboard the Blackbird, Woodard drops metallic blue tones for the interior, but brings in enough range for readers to keep a clear eye on Danger, without losing her to the background.

Petit’s lettering, per usual is on point. Taylor gives readers a solid, flowing script, and Petit makes it all work wonderfully. There is snappy, quick dialog in some spots, and Petit appropriately condenses the word balloon stacks, but then he also lets them breathe in more mundane conversations.

All-New Wolverine #28 is an odd spot for a new reader to jump in, but Taylor, Cabal, Woodard, and Petit do a stellar job of presenting readers with a wonderful welcome mat. These guys are the best there is at what they do. And what they do is make fun comics. This series has been a joy that I look forward to with every issue and one I move to the top of my stack whenever I pick it up, and All-New Wolverine #28 is no exception.