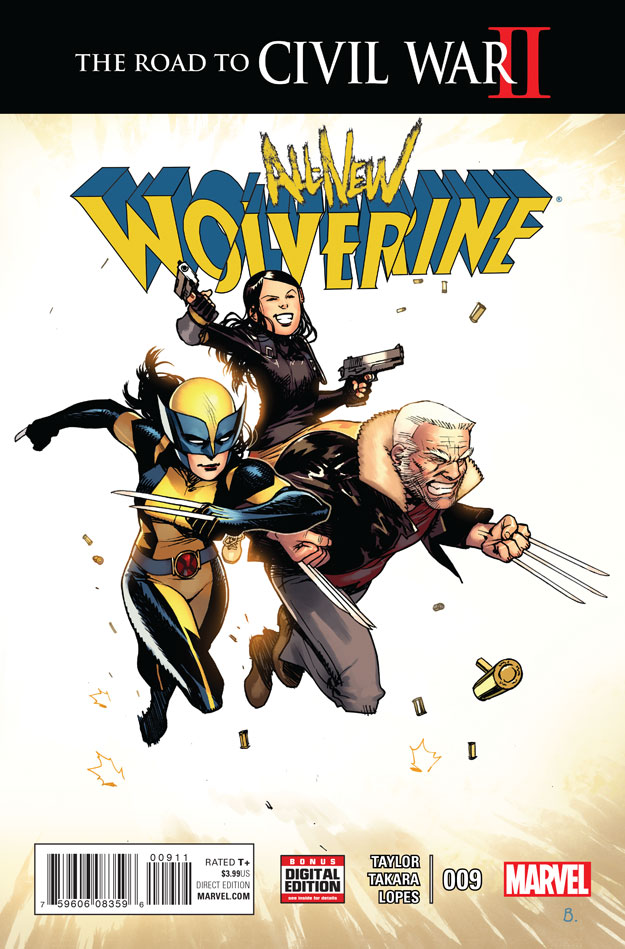 The best new series to come from All-New All-Different Marvel continues to kick serious ass with this second issue featuring Fin Fang Foom, pheromones, and a some serious fun.

This issue is branded as Road To Civil War II….and I have no idea why. I also don’t care, because Taylor, Takara and Lopes deliver such an awesome comic that the banner on the front is completely irrelevant. This series has been amazing since the first issue, and #9 is no different. The unique blend of humour, heart and action makes Wolverine special, and I’ve never enjoyed a run of Wolverine anywhere near as much as I’m loving this one.

Tom Taylor’s story is fantastic, and the ludicrous idea of the contents of “the box” is still making me laugh. Integrating Fin Fang Foom into this title was completely unexpected and hilarious, and it made me realize that this comic has some of the same spirit of the amazing Nextwave, Agents of H.A.T.E. What impressed me the most about the integration of the massive, ancient dragon is that it works. This isn’t just a gag, there’s a story here that makes sense and fits. It also sets up what very well could be one hell of a plot line going forward, and when I hit the final page I was very impressed by how well Taylor pulled together all of the elements he introduced here. Laura is a prime-time worthy character when Taylor is writing her and I can’t wait to see where this tale goes next.

Marcio Takara handles the pencil work and captures the spirit and tone of the series set by David Lopez very well. Foom is all the right parts goofy and imposing, and Laura’s adventure involving the dragon is penciled perfectly. Takara nails the humorous aspects of the issue while also maintaining at all points that Laura is not a character to be trifled with. Logan is given the right amount of grit and each character has the right amount of heart, and I was impressed by the pencil work throughout. Mat Lopes’ colour work finished off the visuals nicely and gave this comic a fun overall feel.

All-New Wolverine #9 is a great read. It’s a fun continuation of the storyline introduced in the last issue and while it has some absolutely silly elements to it, the last page hits like a hammer. Taylor, Takara and Lopes work well together and this is definitely one of the most entertaining comics released this week. You can’t miss with All-New Wolverine, and I can’t wait for the next issue.