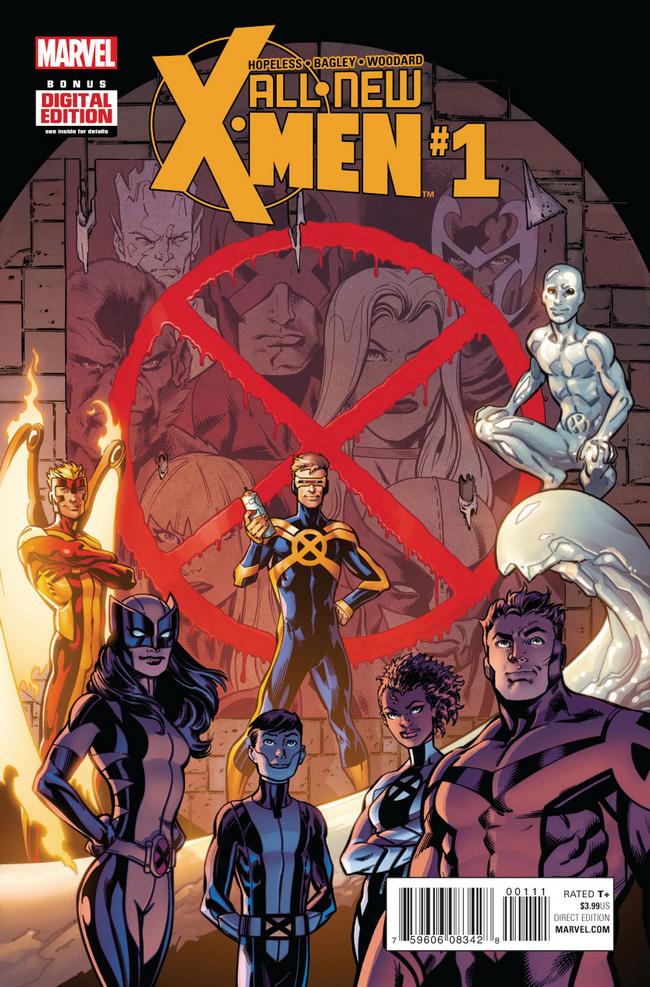 “We’ve been here a while now.” That’s the opening line of All-New X-Men #1 and to some readers, that feels like an understatement. But whether you feel like they’re overstaying their welcome or not, the five time-displaced Original five X-Men are here to stay. Whereas Bendis flirted with the idea of sending the All-New X-Men cast back to the past when he first debuted them, the odds of that happening have long since diminished. With that option off the table, the kids and new writer Dennis Hopeless decide that the best way to avoid living in the shadows of their adult counterparts and get a chance to develop as separate characters is to hit the road.

Not only are the original teens saying adios to the X-Men lifestyle but they’re also leaving behind Jean Grey, who can be seen over in Extraordinary X-Men. Jean is a character that demands attention so it was no surprise that she was the focus point of many of the All-New X-Men’s adventures thus far. With Jean gone, it stands to reason that it’s Scott, Warren, Hank, and Bobby’s time to shine. Or is it? While each of the boys are interesting, Beast and Iceman don’t contrast strongly enough with their older versions to make readers care about their new destinies. Angel on the other hand does but the older Warren is still dealing with some dangling story elements that no writer wants to tackle just yet. X-23, Idie Okonkwo, and Kid Apocalypse have also officially joined the team but it’s impossible to determine Hopeless’ plans with any of them given the generic banter they’re provided with. That means the book’s weight falls on the shoulders of Young Cyclops. We’re still piecing the puzzle together to determine what exactly happened with the adult Scott Summers during Marvel’s eight-month gap but the character’s actions of the past few years and his dramatic fall have packed the younger, and now only, Cyclops with plenty of pathos. Hopeless seems to understand this and although we check in with every member of the cast(as every good team book should do in it’s first issue…), the bulk of the issue centers on Scott, who’s haunted by the ghosts of his older self, literally. A new mutant villain team calling themselves the “Ghosts of Cyclops” has emerged in Chicago and Young Scott understandably feels a obligation to take them down. New mutant villains in the X-Men universe are sorely needed and the gang’s introduction feels like a breath of fresh air. Unfortunately, the threat they pose and Scott’s personal connection fall short of giving the book enough momentum to grab readers, leaving Scott’s internal musings to stand out as the book’s sole highlight. Despite the youthful vibe of the book, Scott’s narration capture the character’s old soul- he uses notebooks and is still freaked out by the internet. He’s fueled by his self-loathing and Hopeless paints a lovely, albeit cynical, character portrait of him. If Hopeless manages to convey the mindsets of the rest of the team as well as he does with Cyclops, we’ll have a great team book in store for us.

With the cast scattered around the country, artist Mark Bagley has a lot on his plate but the issue’s setting and characters are detailed from start to finish. It’s always a relief when young comic characters actually look young and their fresh faces and personality-driven outfits compliment Hopeless’ efforts to create realistic teen characters. During the fight against the Ghosts of Cyclops, Bagley focuses on the punches that Scott lands, making it clear that Scott isn’t fighting with heroic finesse, but with focused anger. Despite the book’s dour narration, inker Andrew Hennessey and colorist Nolan Woodard soak the book with bright, eye-popping tones throughout. The only downsides come with the book’s new creations – the teams’ superhero costumes are uninspired and the designs of the new mutants that make up the Ghosts of Cyclops are all too familiar.

While All-New X-Men #1 may not outrightly hook readers, it provides a strong introduction to one of its’ main characters and introduces a fresh threat. Hopeless’ work on Avengers Arena proves that he’s a master at crafting stories with broken, angst-ridden teen characters. While he seems to be right at home with Cyclops, the question remains as to whether he can make the rest of the All-New X-Men’s individual plights meaningful. With the team already banded together at the end of this first issue, that question will at least be answered sooner rather than later.