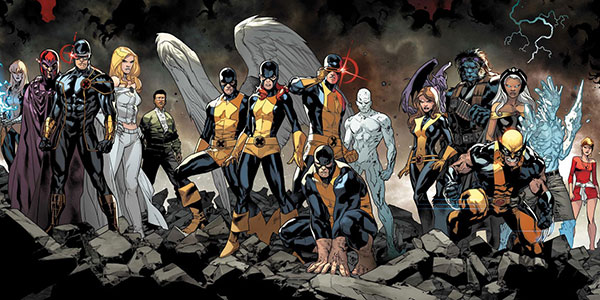 The launch of Marvel NOW! continues with one of the most anticipated titles of the fall. Brian Michael Bendis spent eight years building the Avengers into a comic book franchise, and it all started by shuffling the deck on that team with unconventional choices and big bold storylines. Now he sets out to do the same with the X-Men universe. In the wake of his betrayal in Avengers Vs. X-Men, Cyclops is free and has joined forces with Magneto, Emma Frost, and Magik to locate and rescue brand new mutants popping up all over the globe — much to the chagrin of those that remain behind at the Jean Grey School for Higher Learning. Is he a revolutionary? A criminal? Will he save mutantkind or doom it to greater persecution than ever before? No one knows for sure, but Beast seems to have a plan…

Bendis does an excellent job right away of setting up the new status quo for the X-Men without retreading the minutiae of Marvel’s recent universe-spanning crossover event (which, I must disclaim, I did not read). His characterization of Cyclops as penitent, but still fervently standing by his beliefs, makes for a complicated antagonist. On one hand, Scott has drifted so far from Xavier’s original mission of peaceful coexistence with humanity — a point crucial, of course, to the meat of what’s been publicized about this ongoing series. As we anticipate seeing a young Scott standing in front of a post-AvX Scott, having been pulled through the tunnels of time with his original classmates, one can’t help but marvel at how far we’ve come. And not just in the pages of a comic book. A fascinating tension occurs when a minority presence suddenly comes into its own — be it mutants, persons of color, the LGBT community — and begins to question itself and try to police its own representation to the world. Bendis is setting up a conflict far more interesting than “man vs. man” or “man vs. himself.” This is a culture vs. itself, and it begins right with the most classic X-Man of them all. Who is the fringe? The man who wants to show the world mutants can be militant and won’t be pushed around anymore? Or the teachers who want to shelter their students patiently, waiting for the status quo to come around their way? It’s a curious question.

Immonen does a great job of capturing the essence of each character, especially the original five X-Men in their earliest days. I’m a bit confused as to how far back into the past Beast had to go to recruit Xavier’s first class, but given how much fan outrage bubbles up whenever a hard date is inserted into the narrative, I’m willing to forgo that knowledge. Nevertheless, Immonen captures small details in the original X-Men that implicate a simpler time — from the slight flip in Jean’s above-the-shoulder hair to Scott’s handwriting a love letter to the girl of his dreams (I’m almost certain kids no longer do that). While this issue loses a bit of its intensity from the early previews of the issue’s climatic scenes, biweekly shipping and a strong political premise should keep this title moving swiftly and at the top of my read pile every month.