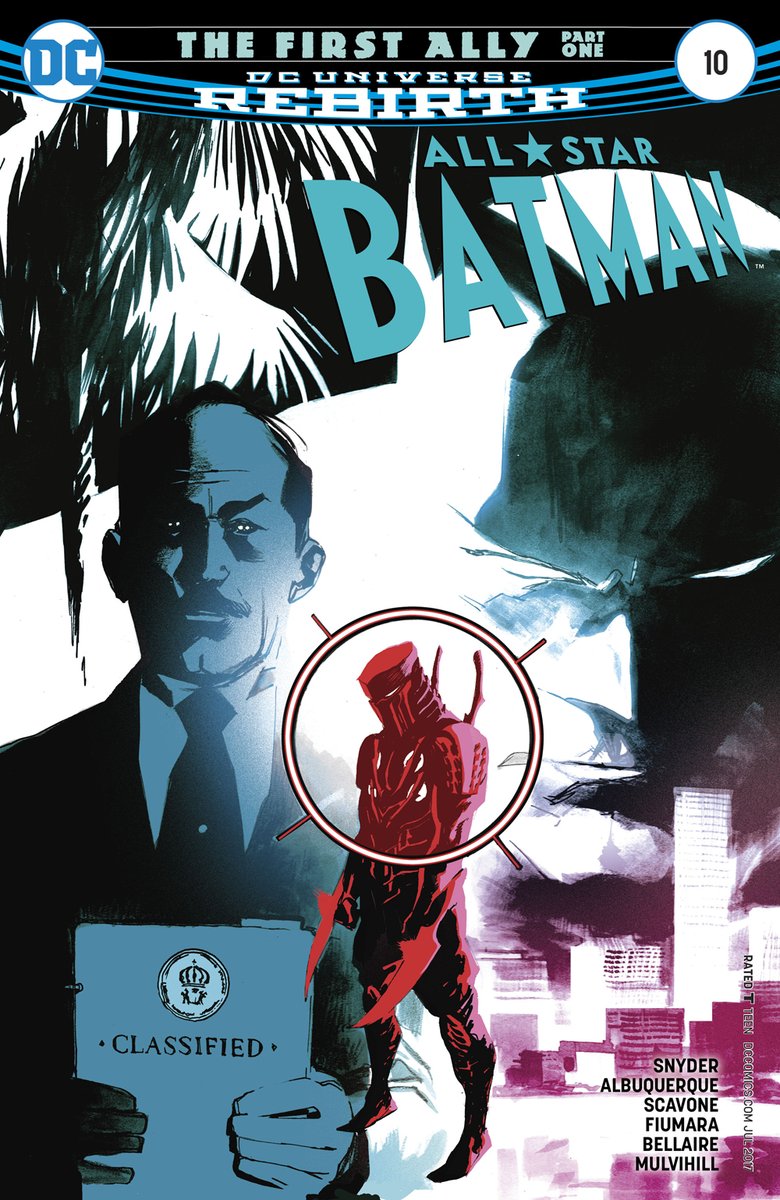 Bruce’s East Coast tour continues with a chance to pick up some incriminating tan lines as he and Alfred chase a dangerous piece of technology to Miami.

The key power behind All Star Batman is the fluidity in Scott Snyder and his collaborators’ approach to each issue — from the breathless pace of the opening arc with John Romita Jr to the dreamy, poetic Mr. Freeze and Poison Ivy stories with Jock and Tula Lotay. The last two issues represent the biggest shift in tone and emphasis, going from a desaturated, gloomy Washington DC story tied together with sly allegory to a slick, neon bathed adventure in Miami.

Sometimes a boutique series like All Star Batman doesn’t have to be any more complicated than the raw thrill of adventure, and this is a sterling case for it. There’s a smooth, obvious elegance to the set up this issue, the criminally underutilized Hush firing a machine gun out of a helicopter at a pursuing Batmobile.

Why has no one ever thought to send the evil plastic surgeon who gave himself his childhood friend’s face to Miami before now? Tommy Elliott is a surgeon with dubious ethics, a gun nut, and the Single White Female of the bat-villains. He’s a can of 4Loko away from being the living embodiment of the Florida Man Twitter account.

It’s the synthesis of the washy neon glow that Jordie Bellaire bathes the city in and Rafael Albuquerque’s watery brushstroke inks that brings out the magic of the setting. There’s an enormous difference between saying a comic takes place in Miami and making them feel like it is. Until Bellaire’s color choices come into play, primarily deep pinks and yellows, it might as well be Gotham and the interplay with Albuquerque’s brush strokes is what provides the smooth, kinetic feel of the sequence.

This issue weaves together a lot of the obvious joys of Florida as a setting from Miami’s neon excess to the state’s gothic pirate history, but above all else it’s a showcase for Albuquerque as both artist of the main story and co-writer of the backup alongside Rafael Scavone. While frequently a model of efficiency and how to create excellent shorthand for action sequences, Albuquerque seems to benefit from time and space to deliver a great deal of fine and idiosyncratic detail to the characters.

Whether it’s the distinctive curve of Bruce’s nose or how the differing shapes of Bruce and Alfred’s eyebrows inform their characterizations, Albuquerque delivers the inflection and emotion behind Snyder’s dialogue through the subtlety of his figurative work. A second reading of the issue even delivers clever hints at the twist behind the flashback segment based on precisely those details.

Despite the overall breeziness and lighthearted fun of the issue (including a hilarious sequence where Bruce is accused of being Hush), there remains a thrilling mystery behind it. A vicious new villain is lurking in the shadows, carrying hints of the Jack the Ripper profile with him whose sigil and surgical work bear a remarkable resemblance to Hush’s costume. We’re never truly on vacation in Snyder’s vision of Batman, even if we’re literally in the middle of an opulent getaway.

The new backup series following in the wake of the revelations about Duke Thomas is, on the other hand, pure fun. What could possibly be better than Bruce going undercover in the vory v zakone, the Russian criminal underground immortalized in the west by Eastern Promises?

The creative team is un-self-conscious in their embrace of the ridiculous myth of the hypermasculine brotherhood, right down to mimicking the horseshoe male pattern baldness and ponytail of the actor who tattooed Viggo Mortensen in their own montage introducing the enforcer that Bruce stands in for on his trip to the “Motherland.”

Once the story leaves Gotham and the real action begins, Trish Mulvihill constrains the palette to pale yellows, deep oranges, and burning hot reds to fill out the muscles and grimaces Sebastian Fiumara chisels out of the page. It’s an utterly ludicrous display of violence that Bruce is taking in as a tourist and inviting us along for the ride in.

The coloring, the line quality, and the captions are all leaving the conceit of Batman’s grim, workmanlike approach to his work on the other side of the Atlantic. This is recreation for him, and by extension, for us as well. “Just once, let yourself go,” Talia al Ghul once famously implored Bruce, and as this story suggests, his idea of release rarely meshes with hers.

As this issue continues to prove, All Star Batman is a precision instrument and the crown jewel of DC’s current output.