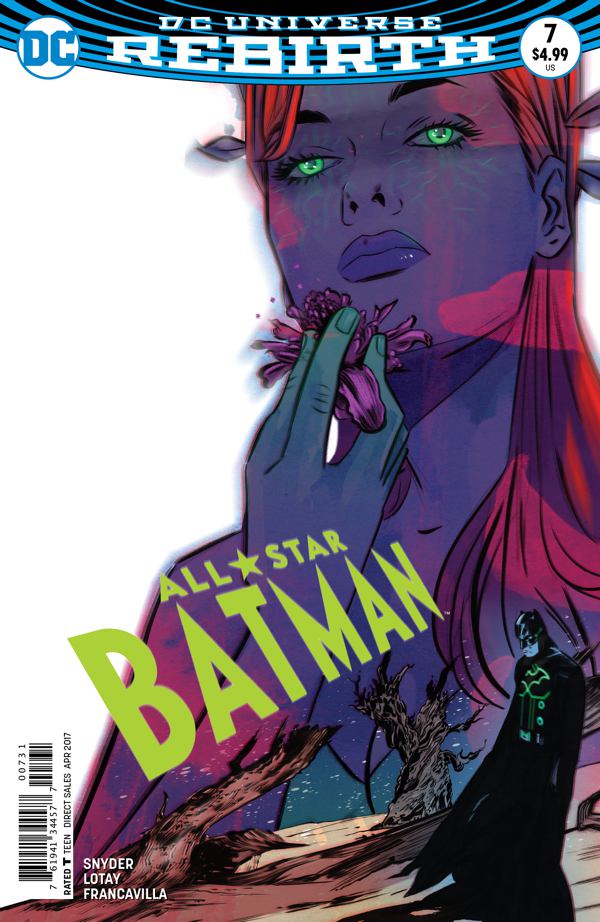 Now THIS is how you make a Poison Ivy comic.

Tula Lotay joins Scott Snyder to deliver an absolutely amazing issue of All Star Batman, an easy pick of the week based on the stellar artwork alone…but there’s also quite a story being told.

Poison Ivy is a Bat-foe that is so much more than just a thug looking to get some loot. In my opinion, she’s infinitely more complex than most of Batman’s adversaries, in that her means may justify intervention from a Caped Crusader, but her reasons for violence/mayhem are often justified. With this issue, Snyder and Lotay show readers just how brilliant Pamela Isley is, and how she is more than a match for Batman at any given time.

Scott Snyder writes a great Ivy, dedicating a fair amount of time to her biologist/scientist roots and really showcasing why she is doing what she is doing out in the desert. He showcases her ability to manipulate people well and never damns the character, he just showcases her power and intellect. She is in control at all times, even as Bruce attempts to deceive her, and I found myself enjoying reading this character more than I ever have before in this issue. More than anything else, though, I think Snyder’s best move in this issue is knowing when to let the artist sing.

I mean no offence to Scott Snyder when I say this, but there are several pages in All Star Batman #7 that I found I stared at for a very long time before I even noticed there was dialogue on the page. Tula Lotay’s work is so rich and layered that you cannot help but feel as entranced as one of Ivy’s manipulated victims, dizzied by the dazzling colours and unique layouts. Lotay’s work is unlike anything you’ll find anywhere else in the industry and she was the perfect artist to tell this story. She perfectly captures Ivy’s anger, her intellect, her beauty, her power and everything in between, giving readers a complex, layered character that outshines the Bat without question in this comic. This is a Poison Ivy comic without question and Tula Lotay’s work with the character absolutely floored me from the first page to her last. I’m not exaggerating when I say this may be the best artwork I’ve seen in comics in 2017.

How do you follow that up the brilliance of the primary story with a backup that doesn’t look like utter garbage? Well, you call in Francesco Francavilla. Snyder and Francavilla have an obvious chemistry and it shows in this short tale. Francavilla’s style differs from Lotay’s enough that a firm break is made between the two stories but his work is also flawless enough that there doesn’t feel like a quality dip. The final page made me laugh, which I quite surprised me considering the course of the issue up to that point and I really appreciated this backup. It didn’t feel like filler, by any means, and Snyder + Francavilla is about the only way to build upon a story like the Poison Ivy one.

All Star Batman #7 is a flawless comic featuring some of the most jaw dropping artwork you will find in comics this month. Tula Lotay brings the thunder to this character and I will, without hesitation, read anything she works on from this point forward. That Snyder cat’s no slouch either, and when you put the two together, magic happens. Add in a dash of Francavilla glory and you’ve got one hell of a reading experience. Do yourself a favour. Get this comic.