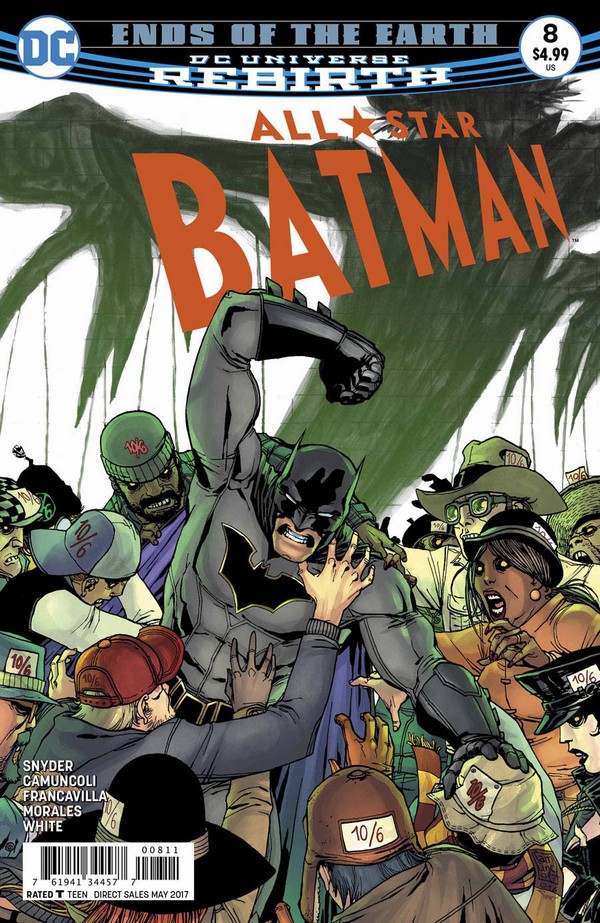 All Star Batman, since its announcement, has always been about lenses. This issue just makes it explicit. After completing his unprecedented run, done largely in partnership with Greg Capullo, Scott Snyder sought fresh lenses to view Gotham through, a decision made obvious by foregrounding the fact that the series would be rotating creative teams to match the villains the series would cycle through. The unspoken implication was that Snyder would, in a sense, be Batman, the constant around which the artists would build the viewpoints and aesthetics of the villains up around.

One of the most persistent and productive readings of Batman’s rogues gallery is that they all represent a neurosis of Bruce’s carried out to its furthest extreme, an idea that seems to inform the most iconic confrontations he’s had with each one. In All Star Batman, Snyder embraces that perspective on Batman even more explicitly than he has in the past, but he elides the obvious interpretations of what each villain represents. That came into the clearest focus in the closing pages of the first arc as Snyder discarded duality as Two Face’s defining trait towards a kind of psychological homeostasis that drew deeply on Snyder’s own struggles mental illness. That particular portrayal ought to stand for years to come as a watershed moment for how the typical pulpy representations of mental illness can be reconfigured from further entrenching stigmas (a topic explored in depth last issue) to a relatable and powerfully affecting allegory.

While every issue up to this point has been about fitting new lenses onto each villain, refracting a different wavelength of light onto Batman, this one ironically uses the psychedelic Mad Hatter to strip them away. Recalling classic BTAS episode “Perchance to Dream,” Mad Hatter leads Bruce through a hallucination claiming that Bruce has been seeing the world through the augmented reality lenses he tried to pitch to Bruce shortly before he became Batman. Tetch claims that he witnessed Bruce have the epiphany to “become a bat” when the safeword meant to disable the technology failed and that the costumes and personalities of his rogues gallery are literally projections Bruce places on ordinary people based on Alice in Wonderland. It’s an amusingly ironic conceit, Tetch adding a lens when he’s claiming to take one away, but it also functions to remind us, tongue in cheek, of how we’ve been asked to read this series from the beginning.

That supposed stripping away of lenses to lay bare the subtext carries through into the art with Giuseppe Camuncoli presenting a considerably stripped down, unadorned style relative to the dizzying heights of idiosyncrasy presented by Jock and Tula Lotay.  Dean White, who dug into John Romita Jr and Danny Miki’s lines with painstaking detail, is similarly restrained on colors this issue, sticking close to natural lighting for all but the most surreal sequences in the comic. The result is a jarring sense of sobriety that serves as a reminder that the series so far has been the hard liquor to the draft beer of the preceding Snyder-Capullo epic. While many of the most memorable arcs of the Snyder-Capullo run, most notably its bookends The Court of Owls and Superheavy, exploited a keen use of decompression to build and release tension, All Star Batman has been a high intensity thrill ride that began at a sprint and has yet to let up.

On the surface, this issue serves as the vehicle to let us know that everything has been connected and planned out since the very beginning, when Harvey and Bruce laid in the grass speculating about a future technology, that All Star Batman is more than just a vanity project. More fundamentally, it makes explicitly clear how integral the cosmetic elements have been to the overarching plot since the very beginning.