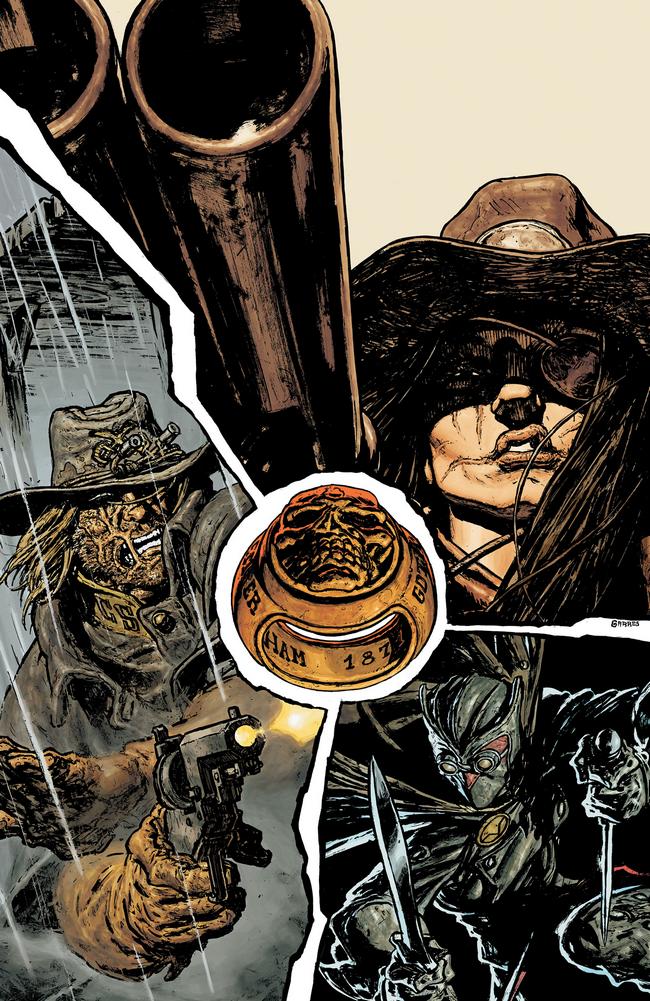 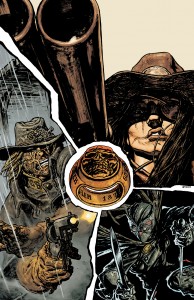 Jonah Hex is fighting the Court of Owls as much as Batman these days (though 13 decades removed) and this issue brings the surprise twist of another player in 19th century Gotham – the worshipers of the Crime Bible. I had thought the Crime Bible shelved (no pun intended) and it was a welcome surprise to see it turn up in this most unlikely of places.

Palmiotti and Gray put Hex and his friends in the middle of a war between these two powers. Their use of Hex’s scarred lover Tallulah Black brings a new depth to the supporting cast, with Dr Arkham still providing the readers’ way into the story as well as some comic relief. This issue focuses greatly on Tallulah and what she is capable of as an equal to Jonah. With the action of this issue, I almost felt that Jonah was her sidekick as she is doing the fighting and thinking for both of them.

Moritat has a fluid style and creates a lot of movement in his panels. The scars on Hex and Tallulah mar their very simple design and as such pop out on the page. He restricts his panels with black gutters, which adds extra weight when he breaks those borders late in the issue for a specific affect.

I wasn’t engaged by the backup feature this month, Terrence 13, a remimagining of Doctor Thirteen. It is a fairly forgettable part one of two ghost story and perhaps will read better with both parts together. Even when the story doesn’t grab me, it’s fun to have a place for these rarely seen characters to pop up. And with All Star Western, you never know when this backup might tie into Jonah’s adventures.

This team continues to produce one of the most consistent books in the New 52 and as a reader who seeks that connective tissue we call continuity, this is a gold mine.

Keith is the co-host of the We Talk Comics podcast.