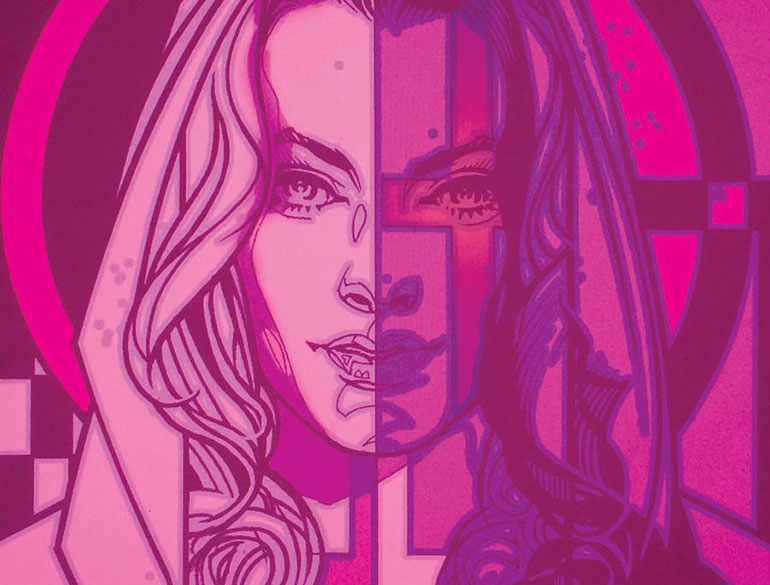 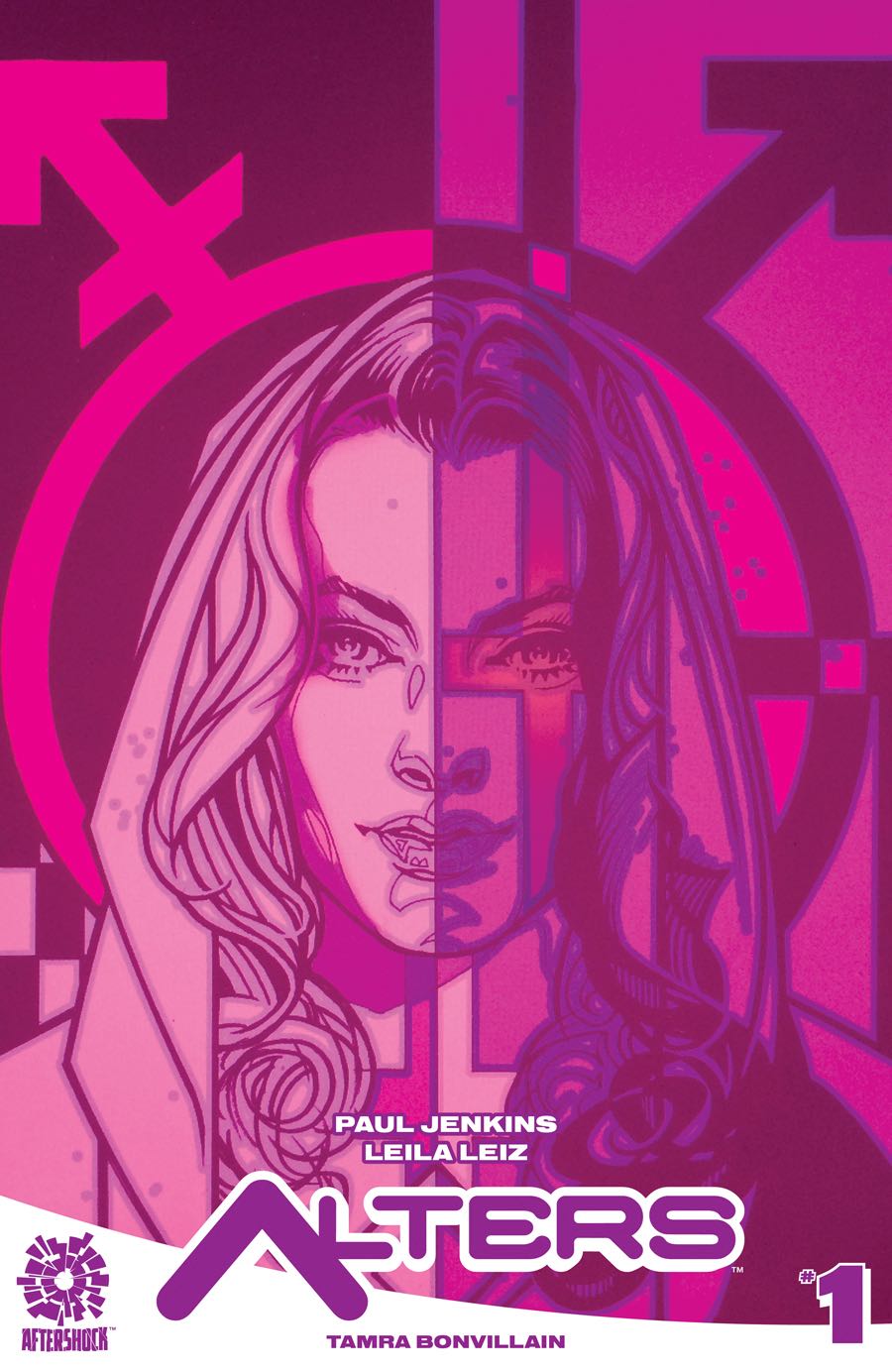 A longstanding criticism of comic book covers is that they stopped providing an accurate and concise evocation of the contents a long time ago.

Onion AV Club critic Oliver Sava recently pointed out one of the likely nadirs of covers creating false expectations by reminding us, via his Twitter account, that Marvel used to have Greg Land doing covers for a Black Widow series that featured interior art by Bill Sienkiewicz. The reverse would have been a cruel, yet likely effective bait and switch: draw the reader in with Sienkiewicz and stick them with Land, but the actual configuration is baffling. Maybe it was an elaborate piece of anti-capitalist performance art meant to discourage people from spending money on it, but only the Marvel bullpen of the era knows for sure.

The debut issue of Alters, or at least where one of the variants is concerned, has the opposite problem: the cover reveals too much.

The variant in question is a giant pink transgender symbol on a white background with a tiny silhouette of the heroine at the very bottom. Writer and series creator Paul Jenkins’ conception of the transgender experience overwhelms the entire narrative. I’m crediting him with a conception of his own because the dominant perspective reads as being peculiarly cisgender and male, but it isn’t what I would call idiosyncratic or deeply considered. It reads like the work of a writer who wants to extract the most pathos out of a scenario while spending the least amount of time trying to achieve a sense of verisimilitude or honest engagement. 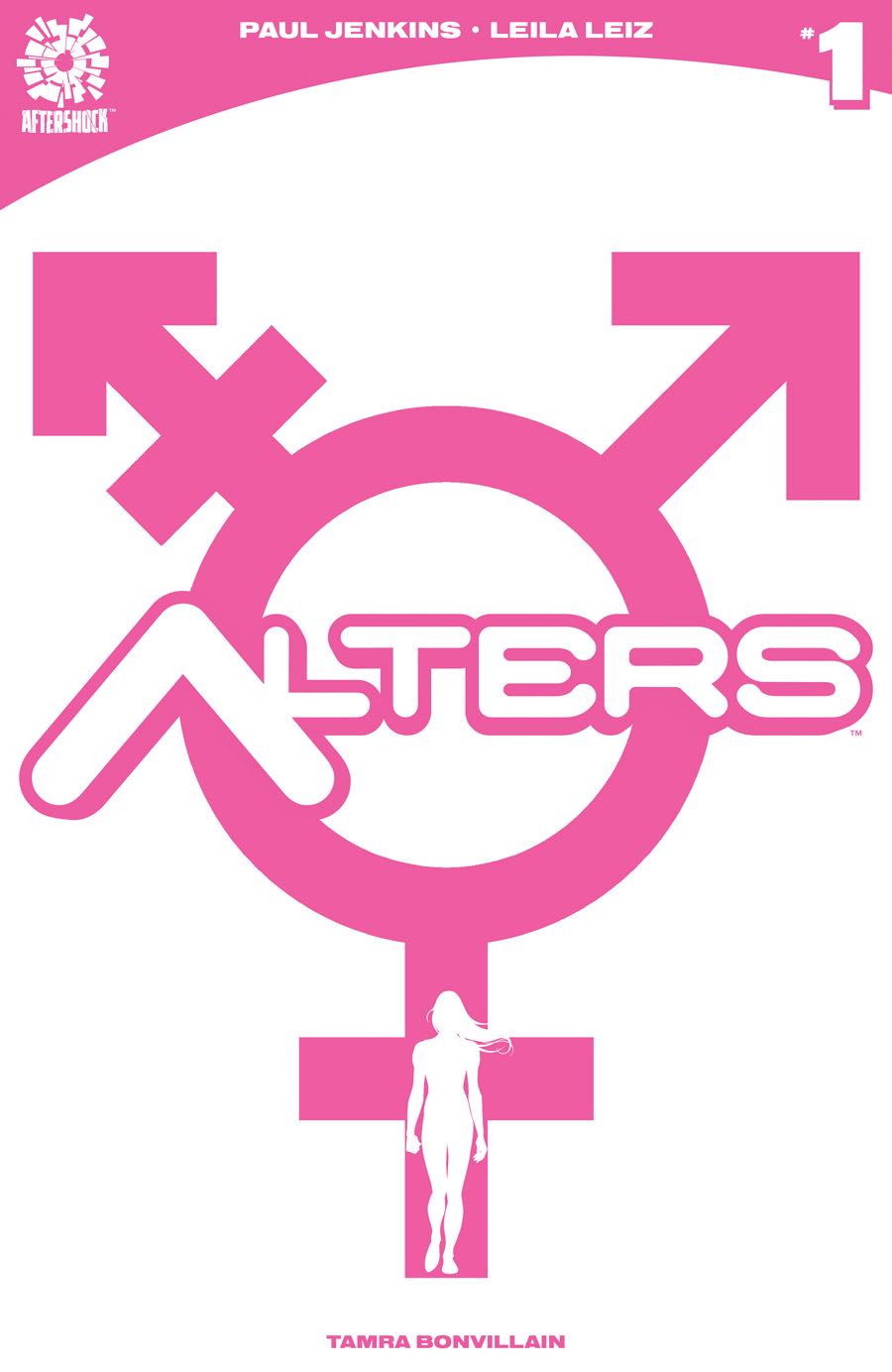 That much has been more or less in evidence since the early press back in June, when Jenkins revealed that the series would revolve around a closeted trans girl beginning her transition in secret, creating a sense of urgency around her coming out because — of course — the physical changes brought on by HRT would, at a certain point, become impossible to conceal. I’m sure that this kind of thing happens in real life. Someone, somewhere has transitioned like that. But it raises a lot of questions about why a cisgender writer would pursue this particular angle, as it places the emphasis on the tension of a double life and seeks to draw entertainment value out of what is typically a deeply painful experience.

The emphasis on suffering and self-flagellation in specific isn’t accidental, as it has something to do with the protagonist’s presumptive Catholicism — especially given that she wears face paint in the shape of a cross in her superhero persona and calls herself Chalice. Which, I just, I don’t know how to approach a choice like that.

I don’t know how you come to the conclusion that choosing something that ritually symbolizes a vagina is a good superhero codename for a trans woman at the outset of her transition. Aside from the genital connotations, you’re looking at the idea of framing your heroine as a receptacle. That’s not flattering or empowering, especially not when filtered through the dominant cis male lens of the narrative.

By reading this comic I’m being asked to look at this character who is wearing a skirt so low that her pelvic bone is very visibly rendered — to the point that she must be getting a Brazilian wax on the regular — and her name is Chalice. This isn’t a superhero for people to identify with. It’s someone’s very transparent fetish.

I don’t think the intent here is anything approaching satire or self aware humor either, because it’s all presented with an overweening earnestness. There’s a three panel sequence where Chalice, presenting as male, is sitting on her bed staring at a wig on a styrofoam mannequin head using the third person to describe her superhero persona. This is immediately preceded by the image of a baseball fan wearing face paint mimicking the Cleveland Indians’ infamous Chief Wahoo.

It’s 2016. I feel like I shouldn’t be given actual cause to invoke the spectre of Norman Bates when talking about a comic that bills itself as starring the world’s first transgender superhero, yet here we are.

No one at the stage of transition that Jenkins has outlined in interviews or implied through this issue is going to have a wasp waist like that. It just isn’t going to happen. Let me tell you, if putting on a skirt spontaneously gave you hips like Stelfreeze and Leiz draw Chalice with, I’d never wear pants again. No one would.

What it takes to get a cisgender artist, under most circumstances, to attempt to cartoon trans women with anything resembling verisimilitude isn’t pretty. It’s one thing to take in Phil Jimenez’s work on The Invisibles drawing Lord Fanny and admire what he did. But I really don’t recommend reading the segments of Anarchy for the Masses where he discusses his pre-turn of the century approach to the character, because the misgendering is the least of the cringeworthy quotes in there.

Carefully considered and executed work typified by Marley Zarcone on Effigy is the epitome of rare. So it could be that Leiz’s depiction — in which Chalice’s facial structure radically changes from rounded chipmunk cheeks in her superhero persona to sharp, almost sallow cheekbones when presenting as male — is a blessing in disguise. It’s one thing to have an artist who works in a highly abstracted way, like Babs Tarr who cartoons the human figure in ways that don’t lend themselves to the subtleties of trans bodies, but Leiz and Stelfreeze are deeply representational artists who are including very specific details. It reveals they never stopped for a second to consider what they were meant to be depicting.

Where genuine thought and consideration appear in Alters is through colorist Tamra Bonvillain, but the familiar green, purple, and peach hues she builds up to create atmosphere for titles as diverse as Rat Queens, Moon Girl and Devil Dinosaur, and Nighthawk can’t hope to redeem or recast what’s already on the page. It’s a refreshing diversion to get lost in the subtle highlight that traces the outline of the villain’s nose for a moment.

But it remains inescapable that the deeply and carefully rendered figure on display is an effeminately presented white terrorist (who appears to be drawn to be a foil for male presenting Chalice) saying that he’s “declaring jihad” by murdering someone on camera in a loose version of what ISIL is known to do, because Chalice has not sworn fealty to him. 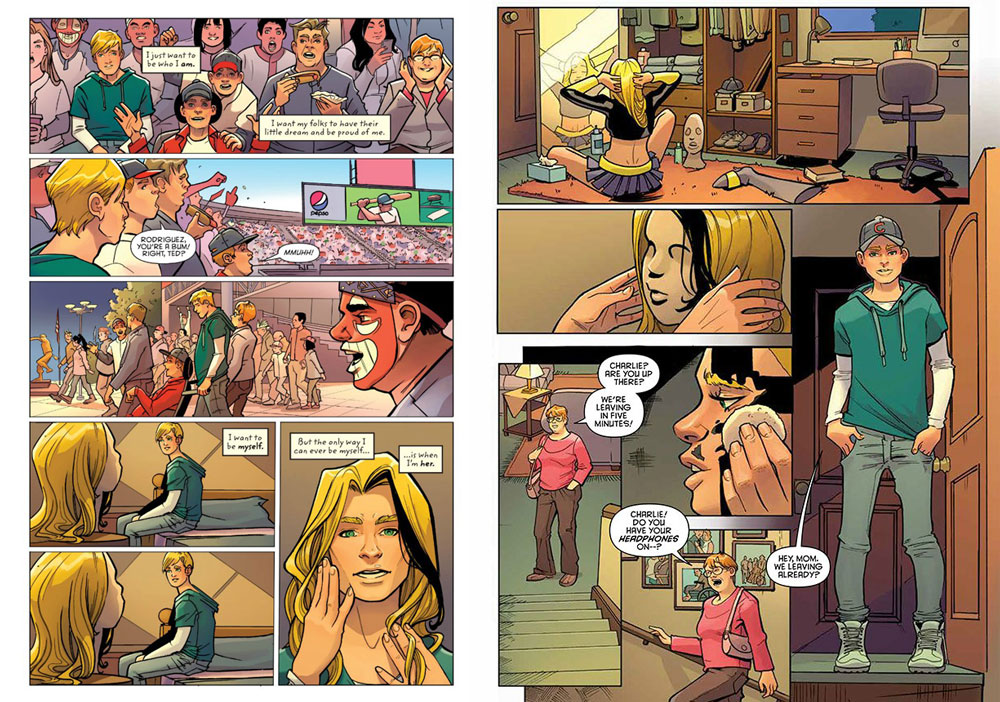 The whole point of Alters, if you’ve made it this far, is to set the stage for Aftershock’s own line of interconnected superhero comics. Chalice is meant to be our window into a much wider world of characters who will populate this world. It begs the question of why she was chosen to be the primary viewpoint character and to so deeply interwine the otherness of the “alters” with Chalice’s experience of dysphoria.

There was a point at which the Fabian Nicieza era of X-Men — typified by the AIDS stand-in Legacy Virus — was a novel and innovative, if flawed, way to create a surrogate for LBGTQIA representation in the mainstream. But that was so long ago, I was a literal infant. Transparent metaphors for otherness to supercede direct depictions of social stigmas are obsolete and patronizing.

The fundamental issue that arises in Alters #1 is that it wants to have things both ways: by creating a comfortable surrogate to lean on, while also tapping into the perceived pathos of trans identity. The only time I can recall that a balancing act between introducing a fantastical other and depicting LBGTQIA issues with accuracy and respect was successful is Kate Leth and Arielle Jovellanos’ “School Spirit” for Fresh Romance. It worked because Leth dislocated the complications of being an immortal witch with the social stigmas that contemporary LBGTQIA youth face, by presenting them as discrete and applying to different characters.

This isn’t a superhero for people to identify with. It’s someone’s very transparent fetish.

The brick wall that Alters runs into full tilt is that Chalice’s joy at being her authentic self as a woman is swallowed whole by the cumbersome exposition introducing the concept of Alters. It leaves the rest of her characterization as being a listless existence consumed with dysphoria and the horror of having to go watch a baseball game, because the gender dynamics are so deeply entrenched in binary notions. OF COURSE she hates sports and has an exaggerated, cartoonishly effete performance of femininity as Chalice.

The foil for Alters and everything that it fails miserably at in representation and verisimilitude is Jody Houser, Francis Portela, and Marguerite Sauvage’s Faith for Valiant. Faith isn’t an especially ambitious superhero story, but there’s apparent love and care applied to considering the idea of letting a fat woman gain a foothold in the wish fulfillment economy of superhero fiction in every aspect of the book’s production.

Faith isn’t engineered to be a normative fetish object, she reflects an honest depiction of a woman her size.

Almost more importantly though is that whenever Faith encounters an aspect of life that she’s been traditionally barred from due to her appearance — like a whirlwind romance with a man who aligns to her appetites — Sauvage takes over art duties to let her live out those dreams. That it’s Sauvage drawing those segments is deeply significant, given that she’s highly sought after for the sensual feminine qualities of her figurative work. That the same artist called on to draw normative fantasies of sex and drugs for projects as diverse as Rob Williams’ Unfollow Vertigo series and the Limitless TV show renders Faith with the same level of care sends a very specific message about the validity of those desires. 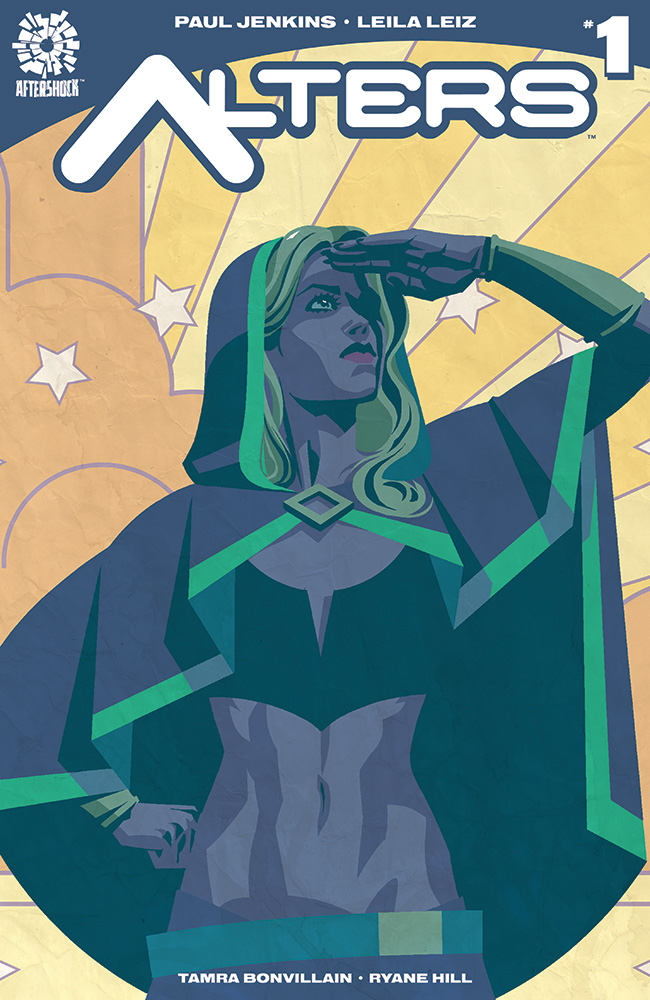 Alters provides no such relief for either the audience or Chalice herself.

Instead, it’s a fraught, bipolar existence that swings from the ecstasy of being a Catholic-coded sexpot in a low rise pleated skirt and hooded cape to the agony of the closet where her only confidant is her disabled, non-verbal brother who couldn’t reveal her secret even if he wanted to.

There aren’t actually any other women in the comic. I mean, like, Chalice has a mother and there’s a completely unimportant scientist somewhere in there, but there’s no significant female presence in her life with any real page time. No friend, rival, or love interest. This is life on hard mode, folks, where our long suffering heroine has absolutely no female presence of note in her life.

Ultimately, all that can really be said about Alters is that it isn’t purposefully or gregariously cruel — and that will likely be said a lot — but what has to be remembered here is that Aftershock pursued an incredibly ambitious narrative for this book. A company that, to the best of my knowledge, doesn’t distribute review copies to the comics press went to the trouble of securing a feature in The Guardian so that they could have someone to quote in support of the specious claim of offering the world’s first transgender superhero. A company that also thought that it was appropriate to crassly monetize the transgender symbol for a variant cover.

This comic desperately wants our attention. They want it to take up as much space as possible in the conversation around transgender representation in comics. The only problem is that they didn’t actually get around to making a comic worth paying any attention to.