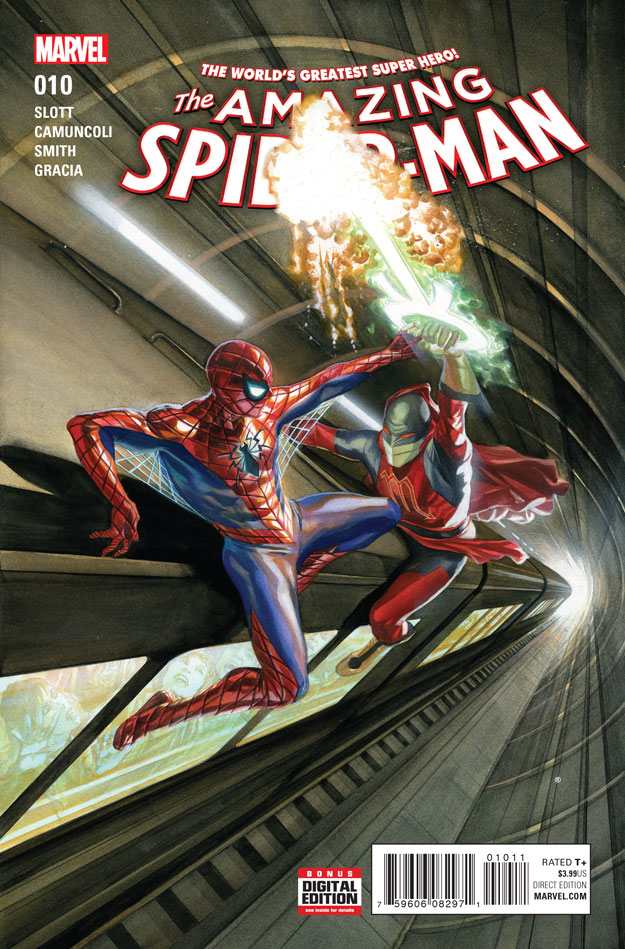 The war with Scorpio continues as Peter Parker tries to catch up to the machinations of the Zodiac.

This volume of Amazing Spider-Man has been fantastic and this issue is no exception. Dan Slott has built a solid villain for this upgraded, worldly Spider-Man. Scorpio challenges Parker in different ways than the old “New York” crew Spidey has tangled with often in the past, and Spider-Man in France is an interesting thing in and of itself. Slott writes the dialogue in this issue very well, including the French citizens. There are some funny moments, some action packed moments and some good ol’ fashioned villain monologuing moments and the net effect is a really fun comic. The evolution of Peter Parker and his supporting crew has been a masterful stroke by Dan Slott and his Spider-work is very strong.

Giuseppe Camuncoli, Cam Smith and Marte Gracia match Slott’s storytelling skills with some impressive art throughout the issue. The team consistently delivers great visuals and they nail every action sequence. Camuncoli’s pencils are sharp and I’ve really enjoyed his work since Cam Smith has been inking. The two work really well together and Marte Gracia’s colour work adds a punch to each page. The artwork in this issue is top notch and worthy of the Amazing Spider-Man mantle, and as long as this team is crushing it on artwork, I’ll be reading it.

Amazing Spider-Man #10 is a great chapter in what has been a really interesting arc. Peter vs. The Zodiac is coming to a head and I’ll be there for the grand finale. This creative team is firing on all cylinders and Amazing Spider-Man is in really good hands.