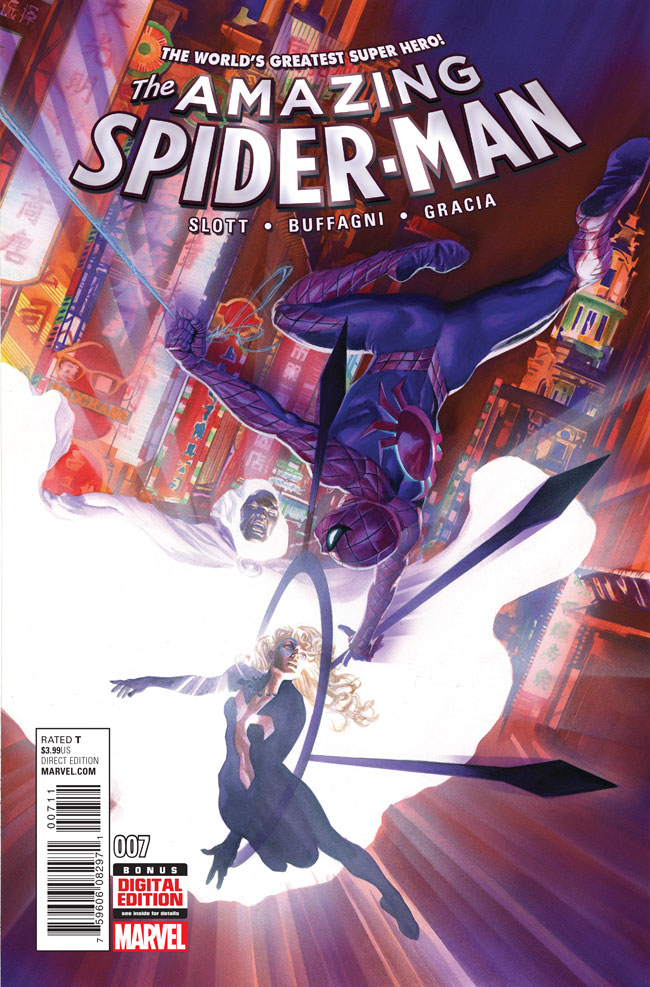 Mister Negative is up to his old tricks, stirring things up with his flipped Cloak & Dagger. Often times, storylines with this villain don’t really thrill me…but this one is damn good.

Dan Slott is really on to something with this worldwide Peter Parker schtick, with issue #7 showing some of the really fun aspects of that. This Parker isn’t bumbling at all, and Slott uses the unique situation of Parker’s global corporation to put him in a new circumstance and location that adds some flair to the series. In this issue, in particular, I found the setting (especially due to Buffagni’s great pencil work) to be a large part of the story, adding a new element and freshness to Amazing Spider-Man that is a ton of fun.

Slott’s work with these characters is as strong as ever, with great banter flying around between Spidey, Dagger, Cloak and Peter’s staff. The quips are fast and furious without being annoying (a tough balance to find) and there’s some significant story progression that occurs in issue #7. For a middle-of-the-arc comic, this one has a lot of value and strong storytelling.

Oh, and Matteo Buffagni and Marte Gracia absolutely kill it on art, so that doesn’t hurt this issue at all. Buffagni’s pencils are great, especially where action is concerned and Peter is masked. He’s a great Spider-Man artist (which is a real thing – some great people don’t do Spidey justice) and Gracia’s colours infuse a ton of energy into the artwork. The visuals are rock solid from start to finish and this issue has put Matteo Buffagni firmly on my radar as an artist to watch.

Amazing Spider-Man #7 is a fun read that shows how to do mid-arc issues right. Slott, Buffagni and Gracia deliver an entertaining chapter in what has been a very solid series thus far.