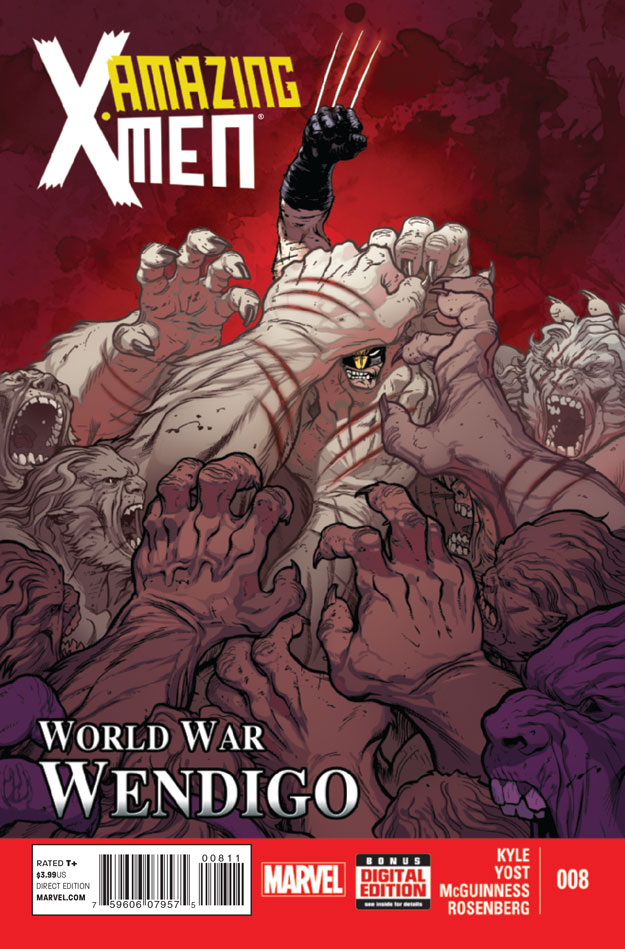 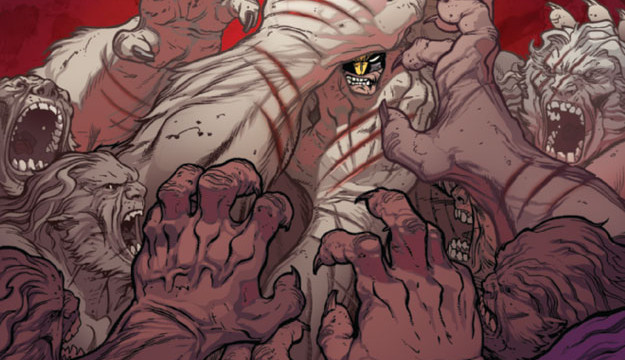 The Jason Aaron era is over, and after an amusing fill in issue by Kathryn Immonen last month, the new ongoing writing team of veteran scribes Craig Kyle and Chris Yost take the reins. The end result isn’t earth shattering, but rather a solid beginning to the World War Wendigo arc that has a distinct old school feel to it.

When fans learned that Jason Aaron was leaving Amazing X-Men following the sixth issue, many proclaimed they were upset, and that they would be dropping the book without even knowing who was going to takeover. Anybody that Marvel picked to follow Aaron was going to have some large shoes to fill, but Kyle & Yost were a smart, inspired choice. Fans of the x-books throughout the years will recognize Kyle & Yost from their stints on X-Force and New X-Men. It was in these books that the writers expressed a deep knowledge and profound respect for the X-Men mythos. They even created one of the more popular new X-Characters of the past fifteen years when X-23 was introduced in the X-Men: Evolution animated series. The duo haven’t been the most prolific comic book writers as their roles in writing/producing Marvel projects outside of the comics, namely Kyle executive producing and Yost co-writing Thor: The Dark World and preparing to write the third movie have kept them busy. Yost has stayed active in the comic world by writing Scarlet Spider and then New Warriors. Now you may be asking why I’m spending this much space talking about the writers. Well, it was to introduce readers who pledged to drop the book to the writers taking over. Some readers may not be familiar with the names, and look at them as “Not Jason Aaron.” These aren’t some scrubs off the street, Kyle & Yost are a well respected writing team with years of experience, and a proven love and understanding of the X-Men. That last part shines through as Amazing X-Men #8 feels like a well written, old school X-Men book that, when combined with the art of Ed McGuinness, should take the sting off the loss of Jason Aaron.

Any reader of the X-Men knows that there are classic story templates that have proven successful and almost quintessentially X-Men throughout the years. A lot of these can be traced back to the Claremont/Cockrum and Claremont/Byrne era, and include the space opera, the Savage Land, Sentinels, time travel, Magneto, and Canada to name a few. Kyle & Yost were smart to start their run on the title going back to put their twist on one of these staples, as the X-Men get thrown into another Canadian adventure.

Amazing X-Men #8 continues the tradition set forth in Claremont and Byrne’s 1979 classic X-Men #120 which introduced everybody’s favorite Canadian superhero team, Alpha Flight.  This time around the issue starts with a murder in Ontario that was a little more gruesome than what I was expecting to find in the pages of this book. Then we cut to Wolverine, who finds himself in Canada at the behest of Heather McDonald (Alpha Flight’s Vindicator) as her husband James (Guardian) has gone missing following an argument. As Wolverine and Vindicator follow Guardian’s trail, Storm is trying to figure out where Wolverine disappeared to. This is where we get introduced to the extended cast of characters that Kyle & Yost plan to use, and we are provided a brief insight into their characterization. After a long run on a group of characters like Aaron had with these X-Men, it is usually jarring when another writer comes in with their versions of the characters. The same holds true here, but is kept to a minimum by the writers’ knowledge of who these characters are. Storm and Iceman were the most different, with the former being a little too much of a hard ass, and the latter being handled like more of a dummy/goofball than he had been during Aaron’s tenure. This is only the first issue of the run so here is hoping that Kyle & Yost find their groove with certain characters, and have them a bit more in line with their current growth rather than their classic characterization. On the opposite side of the spectrum, Nightcrawler and the new-to-the-book Colossus are presented perfectly. Their reunion, and subsequent conversation is the highlight of the issue. While our time spent at the JGS is enjoyable, it serves more as an introduction, and way to put the pieces out on the board than it does to serve any narrative purpose. The writers may have tried to pack a little too much into a 22 page issue, as the story quickly jumps around, and when the book finally gets going it’s over. What we are left with is a setup issue featuring the ingredients of what should prove to be an extremely fun story that puts an interesting twist on concepts from a classic era of X-Men.

On the art side of the book you have the great Ed McGuinness back after a two issue break. It was nice to see that McGuiness was sticking around for this issue as it provides consistency with the first arc, and makes the writing change a bit easier to get used to. The only problem is that this is far from the best work Ed McGuinness has produced. Even then, the issue still looks better than most of the comics out there, but when you know an artist is capable of more it is hard to appreciate what’s in front of you. The lines aren’t as crisp, and the characters aren’t as well defined. We are also left with a few panels with empty backgrounds, one of my big art pet peeves.

I have to wonder if the change in inker from Dexter Vines to Mark Farmer is to blame for the art not looking as great as one would expect from Ed McGuinness. Farmer is a talented, well-established inker who has produced absolutely wonderful work with the legend that is Alan Davis. I’m just not sure his work brings out the best in McGuinness’ pencils. While the art still looks good with three talented artists, including colorist Rachelle Rosenberg, providing solid work, the issue just doesn’t look and feel as big or as bold as a McGuniess book usually does. The combination of Farmer working with an artist other than Alan Davis, and the absence of long time McGuinness collaborator Dexter Vines makes you respect the penciler/inker relationship that is one of the most important, yet often overlooked, in the business.

As I said, the book still looks better than most, and when it looks good, it looks great. The splash page with Nightcrawler and Colossus is a wonderful example of a right page turn done well. Then the layout of the page with Storm reaching out to Quentin, Northstar, Firestar, Beast, and Iceman separately is wonderful. The best art of the issue however is reserved for the pages at the tail end. The way Wolverine following in Guardian’s footsteps was portrayed was a highlight, and that directly leads right into another solid page featuring our first glimpse at the Wendigo of World War Wendigo. The absolute highlight of the issue artistically comes in the final pages in a wonderful double splash that is as close to the McGunniess that we are used to as the issue comes, and should get any reader excited for the rest of the arc.

Despite a few hiccups along the way, Kyle, Yost, and McGuinness keep the streak alive as Amazing X-Men is up eight issues without a dud. With Carlo Barberi taking over penciling duties next issue, it is a shame that McGuinness doesn’t go out with his best work, but as mentioned several times already it was far from bad. Ultimately, Amazing X-Men #8 serves as both an introduction to Kyle & Yost’s take on these characters and to establish the threat of World War Wendigo. The results are an issue that is primarily setup, but it provides enough highlights to make readers excited for what’s next. The pieces are now on the board, and I expect even bigger and better going forward with the X-Men and Alpha Flight finding themselves shoulders deep in Wendigo.