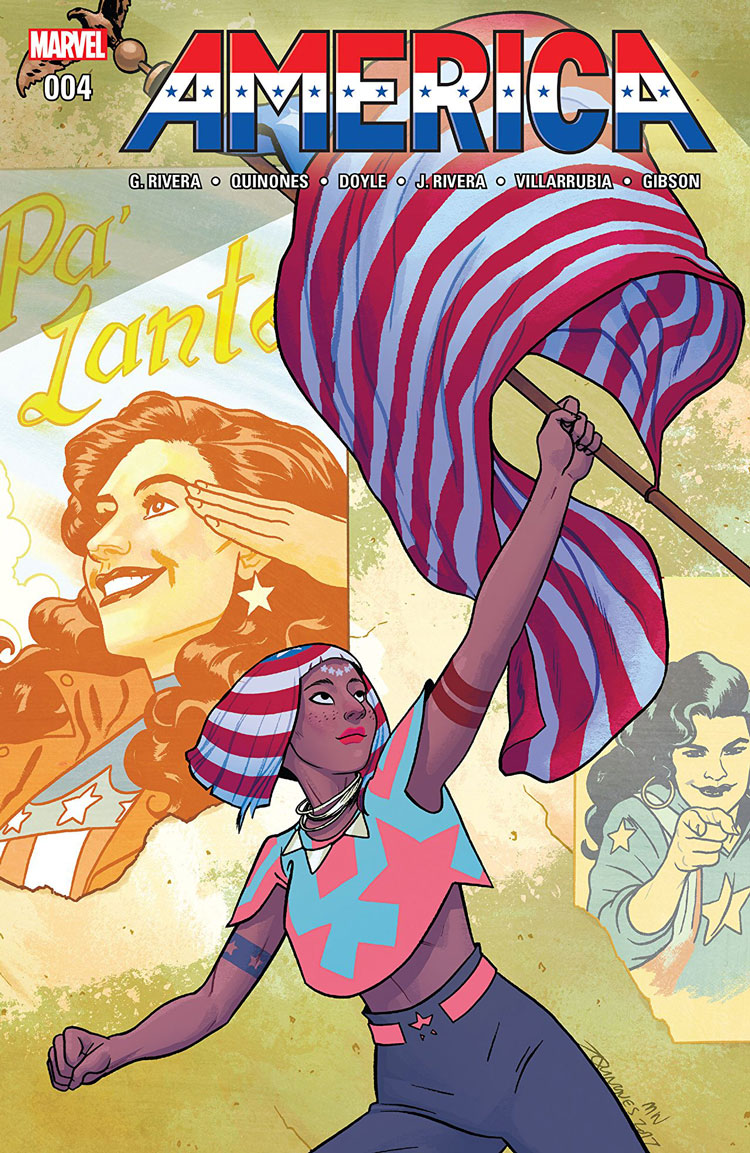 Focus on the portal.

America has been thrust through time and dimension, learning important lessons culminating in an important battle. She’d love to throw a punch, but she realizes that won’t solve all her problems. With what she’s learned, she creates a solution and gets everything around her to slow down, though she is still left to deal with rather complicated parts of her life.

America #4 not only has all the punches you could ask for, but it also explores what makes America America. She is someone who simultaneously captures the role of grief, action, and relationships, presenting a new way to view each. America is not the function of painful memories, though she does not quite embrace them either. She is still figuring things out, but this particular issues pushes her closer.

Gabby Rivera puts women of color in the spotlight throughout the story, and the only two men that show up are black, one bisexual. These demographic factors help America shine, a reminder that it’s remarkably easy to create stories that look different in so many ways. Coupled with the inclusion of different people is the examination of personal growth and intimacy. Rivera creates a plot mechanism of development by having America interact with her past self, showing what has happened to the character over the past four issues. This contrast reveals that America is much more willing to rely on things besides her fist, and that she values those around her and is learning to make that known.

Rivera casts our protagonist as someone who is able to adapt. We can see this in America’s previous stories, but I’m not sure this part of her has been so plainly laid out. The opening two pages and all of their bittersweet emotions anchor her to her present adventure, subtly allowing a context that draws from the emotional processes that underlie America’s more often expressed demeanor. Even with these evocative glimpses into America’s inner workings, Rivera reminds us that the character’s motto is still Knuck If You Buck and that she’s always ready to fight.

Joe Quinones is quite the busybody this time with a hand in each dimension of art. Ming Doyle accompanies on pencils, and they help give the comic an increasingly distinctive vibe. The imagery seems to be coming into its own, catching the groove of each new issue. The environment is neat and precise, while each character is fleshed out in stylistic detail expressing the ordinary and funky pieces of America’s universe.

Quinones and Doyle work with Joe Rivera on inks and their work enhances the series through some key techniques. In the first two pages, showcasing Elena and Amalia’s sacrifice to protect the Parallel, inking is light and delicate, intensifying the feelings underneath their actions and America’s waking to find them gone. The rest of the issue is clad in the bold lines that draw distinctions between characters and provide emphasis in key scenes. One in particular, where America is searching for the right portal to handle her gigantic foe, is spectacular in its displays of energy and her presence as a central force. She is a statement in this double-page spread, grounding the electric air of interdimensional travel, evidence of Quinones, Doyle, and Rivera’s talent.

Jose Villarrubia and Jordan Gibson have Quinones in tow on colors, moving from the ethereal to the everyday. Again, the first couple of pages of America #4 are a testament to the power of images, guided by the wispy colors outlining America’s mothers as they take their heroic flight. The rest of the issue is cast in varying blues, allowing for emotional depth to leak from the page. Villarrubia, Gibson, and Quinones deliberately use brighter reds and pinks as a mark of contrast, giving a home to much of the energy within the issue. Their work together capitalizes on the tone set forth through the plot, helping to create a much more remarkable impact on the story.

I have a lot of feelings to sort through after reading this issue. We see some points from the first chapter begin to resolve themselves, and even if they aren’t neat or what I hoped would happen, they are still integral pivots to America’s character and story that make this series a work of art. There’s a lot of people on the creative team and they all put forth effort to help this story excel. After reading the fourth issue, I think America is headed to a place that it rightfully deserves, traversing dimensions and space to elucidate the hero herself and each of the tiny things that build to her enthralling narrative.