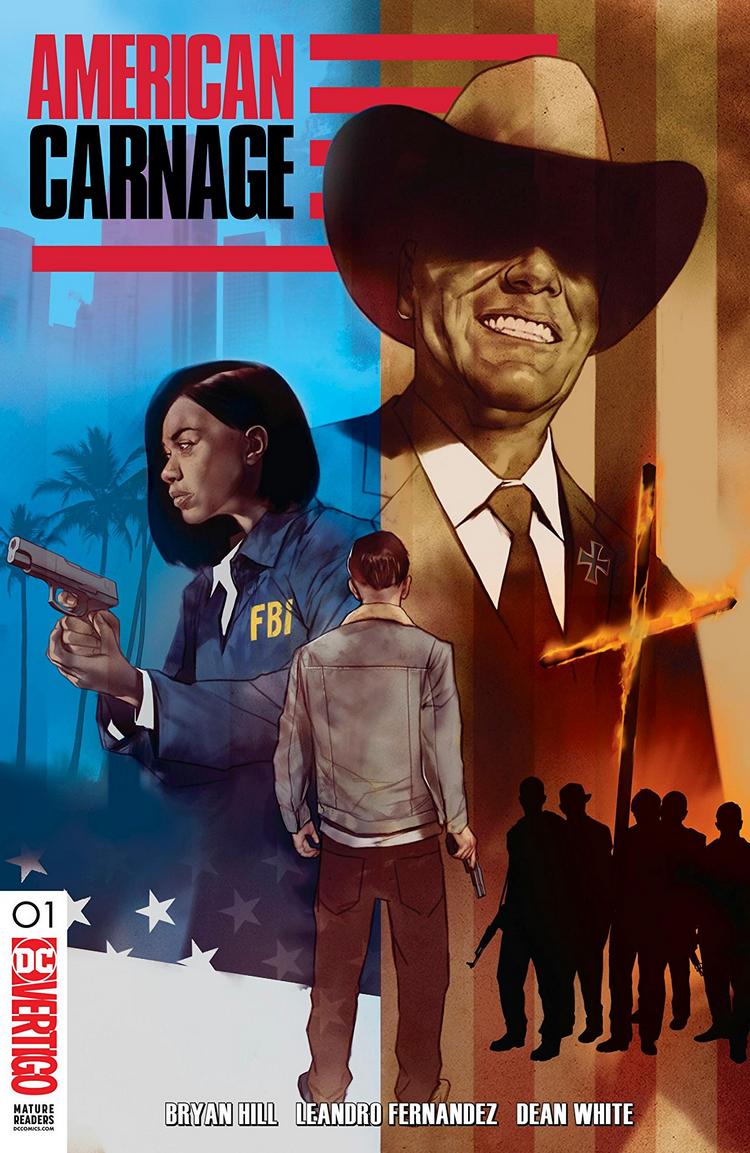 An interesting and timely thriller, American Carnage #1 is a fantastic first entry into what is sure to be an extremely interesting addition to the Vertigo lineup.

A riveting tale of murder and suspense Bryan Hill’s American Carnage centers on dishonored FBI Agent Richard Wright and his attempted redemption after the slaying of an unarmed Black teenager. Wright’s former mentor contacts him in an attempt to infiltrate a white supremacist group suspected of killing another FBI Agent. Agent Curry selects former Agent Wright because he is biracial and white passing making him the perfect candidate to infiltrate the organization. Hill manages to craft a compelling story that is impossible to put down. Each new development driving you forward and adding another piece to the puzzle. Though we have only spent a single issue with them Hill’s characters feel complex and driven not just by the story but also by their own feelings and desires. He does a fantastic job of crafting riveting characters that feel flawed and organic.

Hill’s first issue is only elevated by Leandro Fernandez’s fantastic art. Fernandez perfectly suits the narrative and heightens Hill’s already complex storyline. He takes a simplistic yet detailed approach to illustrating the comics first issue which doesn’t overshadow the story or over complicate each panel. Fernandez’s simplistic approach and Dean White’s color palette perfectly harmonizes and forms the stellar artwork for issue #1.

Overall, American Carnage #1 is an interesting read with a colorful cast of characters. Hill does a fantastic job of perfectly weaving together his story and characters to produce I’m interested in seeing the direction that Bryan Hill takes the book and where we find the characters by the end of the books first arc. The thing I love most about this first issue is how unapologetic Hill seems in telling the story that he intends to tell and using the imagery that best suits that story. I love that Hill doesn’t shy away from using words, scenarios, and imagery that would generally make people uncomfortable.

I foresee the team delivering a story that doesn’t shy away from addressing both the blatant and poorly concealed racism and bigotry that plagues America currently. American Carnage #1 feels like a perfect fit for a Trump era America where hate and bigotry are marketed as “real” values and opinions rather than the filth that they perpetuate.