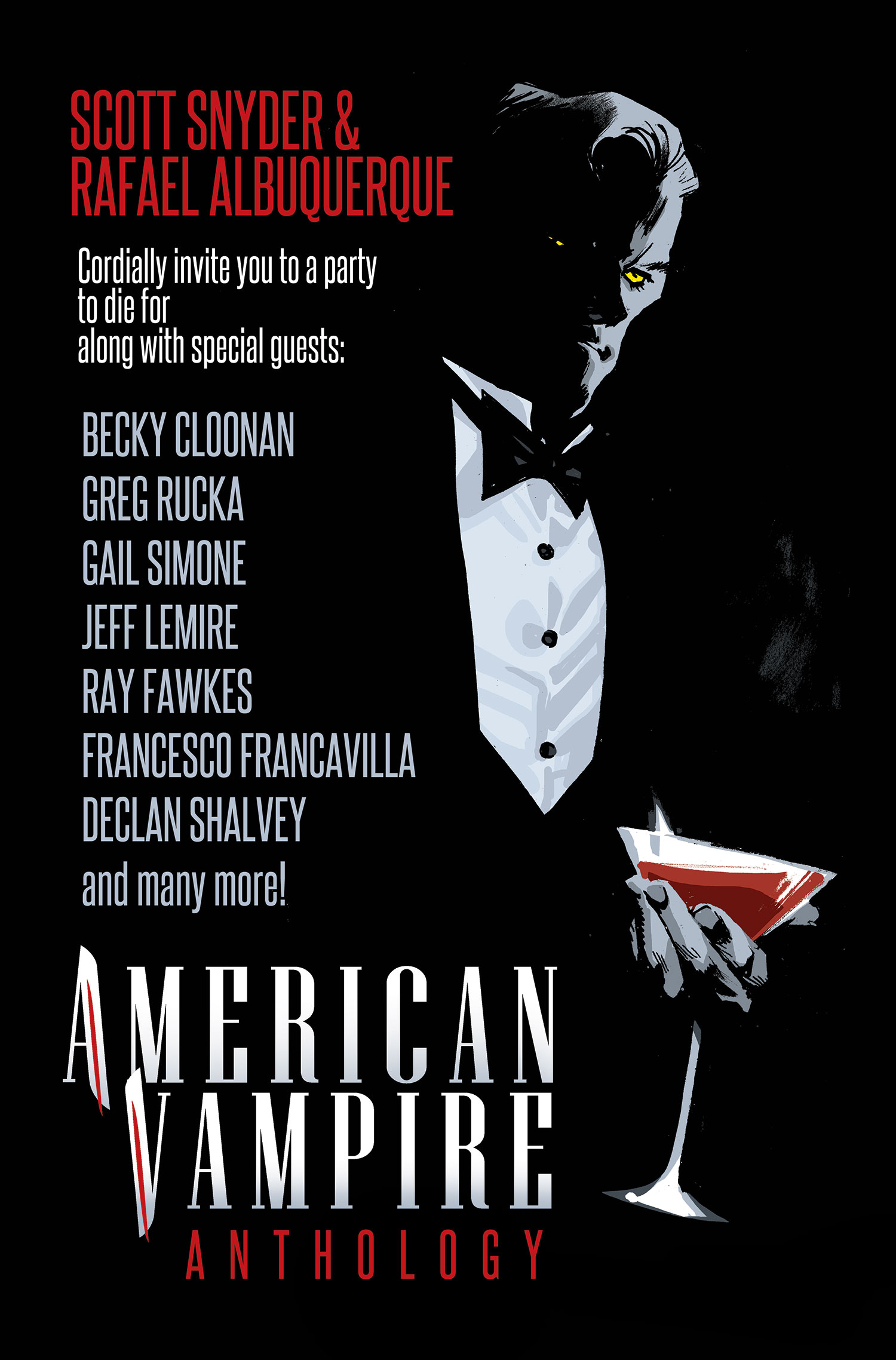 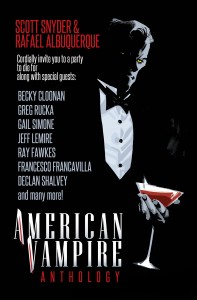 American Vampire fans have been suffering nobly through the book’s hiatus. The American Vampire Anthology should serve as a protein-heavy snack to tide everyone over until the dark times end. Ten stories (well, 9 – I count the first and last stories by Scott Snyder and Rafael Albuquerque as one) written and drawn by 15 writers and artists, each tale either fills in a missing piece of the existing mythos or fleshes out the world of AV at large.

Because this is an anthology, I’m going to do something a little different. I can’t give real in depth attention to all 9 stories without this being a novella, so instead I’ll provide 2-3 sentence micro-reviews for each story.

The Man Comes Around Part 1 & 2: Scott Snyder (w), Rafael Albuquerque (a) – I read this one listening to Johnny Cash’s version of the titular song. It is elating to see Skinner again, and of course the art is stunning. Ultimately, it’s a vicious tease of a story.

The Lost Colony: Jason Aaron (w), Declan Shalvey (a) – My favorite of the bunch, as I’ve spent my entire life in southeastern Virginia and the North Carolina coast. AV is at its best when it weaves in and out of American History. You’ll never watch the play the same way again.

Bleeding Kansas: Rafael Albuquerque (w), Ivo Malazzo (a) – My least favorite of the bunch, if only because the art wasn’t my taste. The connection between the vamps protecting a food source and the Border Wars was an interesting one. I’d like to see more writing from Albuquerque!

Canadian Vampire: Jeff Lemire (w), Ray Fawkes (a) – Yes Jeff Lemire, we get it, you love Canada! I would actually read an entire book about Jack Warnhammer. The story is the first to connect to characters we’ve already met. The art is weird and wonderful.

Greed: Becky Cloonan (w, a) – A missing piece of Skinner Sweet’s past, and a nice peek at the darker, nasty aspect of his nature. The Death Valley landscape is scorching and rough and beautiful. This is probably my 2nd favorite story, tied with Portland 1940. Oh, and there’s another dead horse in a book with Scott Snyder’s name on it.

The Producers: Francesco Francavilla (w, a) – Another missing piece of AV’s past, this story reminds me of the opening of an old vampire movie (in the best way). Francavilla can write as wonderfully as he can draw. His style has a way of bringing horror stories to life.

Essence of Life: Gail Simone (w), Tula Lotay (a) – This story will make you incredibly uncomfortable. You might cheer at the end. I actually really appreciated finding out more about this particular character, as she’s seemed a little thin at times. Lotay draws beautiful, sad faces.

Last Night: Gabriel Bá & Fábio Moon (w, a) – A much needed trip into the East Coast Jazz Scene, and an injection of much needed color into the sometimes very pasty AV landscape. Fans of Bá & Moon’s work will be pleased, and those who haven’t seen their stuff will probably want to see more.

Portland 1940: Greg Rucka (w), John Paul Leon (a) – I teased Lemire about Canada, so in the name of fairness: yes Greg Rucka, you love Stumptown! Another Skinner Sweet tale, and a unique one in the sense that he is very much not in control of the situation. Leon’s art is dark and moody – I would love to see him do future guest spots in the AV universe. Tied with Greed for my 2nd favorite story.

There you have it. The world of American Vampire just got a little bit bigger and a whole lot bloodier. The only downside to this book is the wait for book’s return hurts like a gold bullet in the gut.