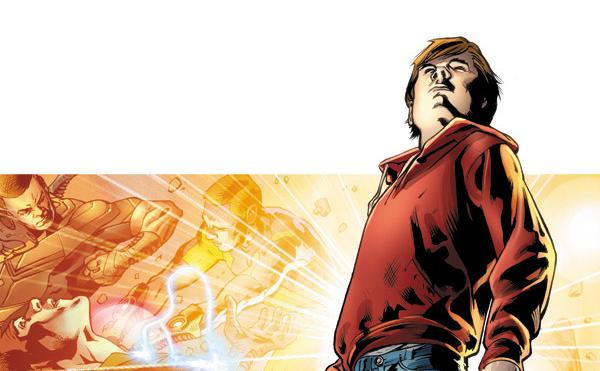 “This…is America’s Got Powers!” I can hear the Ryan Seacrest of an alternate reality dropping that line and after reading the first issue of this series I have to say, it gives me chills. When Bryan Hitch announced on Twitter that his next project was going to be a creator owned book called America’s Got Powers I found myself shellshocked. I couldn’t believe that an artistic titan of the comics world was going to do a spoof book about a reality show. Was he kidding? No. He wasn’t kidding. And I’m damn glad I was wrong.

I have never read anything by Jonathan Ross before, so I had no idea what to expect from this book story wise and from a scripting perspective but I was pleasantly surprised to read dialogue that is 100% locked in to what reality TV is. This book certainly pushes the boundaries and takes reality TV to some new extremes, but the amazing part about this issue is that the boundaries feel plausible. It terrifies me to say it, and after reading the book you may see what I mean, but they feel plausible. This first issue is expertly crafted in the sense that the story drives forward, discussing a world we know nothing about, while constantly making biting commentaries about the world we live in now. It is an excellent blend of sheer comic book entertainment and “comic with a purpose” and I commend Ross for blending the two seemingly opposing forces so seemlessly. I expected a lot of tired pop culture references and some satire but this book absolutely floored me with it’s social commentary. If I have one request I can make of Ross it is to stay as strong for issue #2.

And now, the art. I’m a Hitch fan, I’ve loved his Marvel work and for that reason alone I wanted to judge this book harshly. I wanted to somehow force him back to Marvel and drawing superheroes through my disappointed thoughts and as much as it pains me to do so, I have to say he proved me wrong. I want Hitch working as hard as he possibly can, forsaking sleep and time with his family to get me the second issue of this book as fast as is humanly possible. The art in this book is Hitch doing what he does best: widescreen action that explodes off the page and fantastic visuals panel after panel. This artwork is solid from start to finish, which is no easy task for a double-sized book, and I applaud Hitch for bringing his A game to this creator owned effort.

I don’t know how much more I can rave about this book so I’m going to sum things up here. This creative team astounded me with how well crafted this issue is. This is a book that any new comic fan can pick up and read immediately and see what the comic medium can be. Even though I feared the worst when it was announced, America’s Got Talent is not a cheap satirical farce about reality TV. It is an intelligent and poignant look at the world and, being that the first printing has already sold out, all I can recommend is to grab a copy as soon as you see one. You won’t get a second chance.