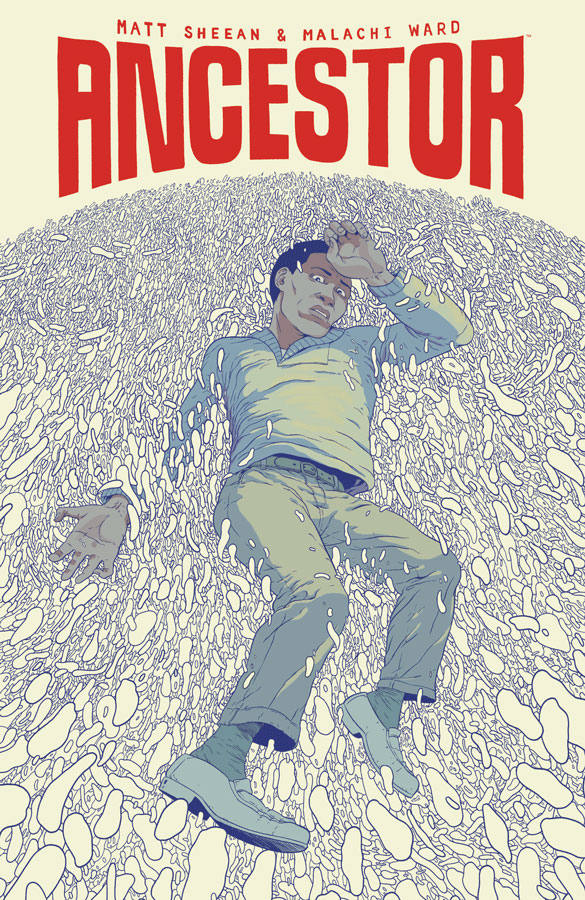 Island cements its position as the primary incubator of great new storytelling in comics with its second trade release, Malachi Ward and Matt Sheean’s Ancestor.

The credo of Island, Brandon Graham and Emma Rios’ monthly anthology, since its debut issue has been the ultimate freedom of its contributors, but that hasn’t prevented thematic patterns from emerging — most notably between Ancestor and Emma Rios’ previously collected I.D. Both stories are high concept science fiction stories that eschew the usual tropes to focus in on the therapeutic qualities of speculative technologies.

For Rios, that manifested in a brain transfer technology that yielded the most empathetic and insightful portrayal of gender dysphoria by a cisgender creator in recent years. Ward and Sheean center their narrative on a catch all augmented reality interface called The Service they introduce through an anxiety relief program run by the story’s protagonist Peter.

Much like Rios did in I.D., the pair build an intimate, empathetic perspective through their protagonist’s hands as the program guides him through a ritual to de-escalate his panic attack. It’s a gently subversive tactic that challenges the normative notion that a character ought to be incidentally non-white, queer, disabled, or any other identity marker that falls outside the dominant group.

Especially where futuristic technology is concerned, no one “just happens to be” queer, mentally ill, or a person of color. How the individual responds to a given technology is going to be shaped by that otherness, which is what Ward and Sheean draw upon by introducing The Service as it applies to Peter’s anxiety before progressing on to the main plot and the wider context of the technology.

Given that most dystopia and fiction dealing with speculative technology either seek to build metaphors subjecting straight, white protagonists to treatment that marginalized groups receive in the real world or explore normative power fantasies, Ancestor, and I.D. before it represent a welcome breath of fresh air in the genre.

As the story develops, the mundane uses of the technology emerge, like a bartending app that takes over Peter’s body to make a drink and the level of dependency that people have on it to call up literary references or remember each others’ names become the focus of philosophical discussions as he and his friends arrive at a party hosted by one of The Service’s creators who has paradoxically made it unusable in and around his home.

Regardless of the exotic nature of the technology under discussion, it’s fundamentally the same talking points that come up in generationally divided exchanges about the role of smartphones in our daily lives. The irony, of course, is that Whiteside, the co-creator of The Service who breezily mocks what he views as people’s’ inability to think or act without it suffers from anxiety so acute that he has to retreat to a hidden basement housing an apparatus running The Service.

From there, Ancestor transforms into something a lot like Karyn Kusama’s The Invitation as the purpose of the party is revealed to be the next stage in the post humanist cult that Whiteside had been quietly grooming. Without any direct allusions, Ward and Sheean cleverly evoke the libertarian politics and bizarre personal ambitions of current tech sector CEOs like Peter Thiel and Elon Musk in their conception of Whiteside.

Invoking the spectre of Ayn Rand in science fiction, and especially comics, is a fairly mundane choice in and of itself, but Ward and Sheean take it in an engaging direction by having Whiteside attempt to take those Randian posthumanist musings to their wildest possible conclusion.

Whiteside has the guests funneled into a room at gunpoint where they stand on circles painted onto the floor and wait for personal interviews to determine whether they continue on with the group or die on the spot. From there he reveals that he’s created a godlike creature called Vere Durqa that will allow him and his inner circle to consolidate power and solve what he believes to be the fundamental problem of life: the frailty of the human body. Whatever his true machinations were, likely to rule over humanity at the head of a small ruling cabal, they’re dashed by Vere Durqa’s revelation that she can elevate them all to the same kind of godhood that she enjoys, which she does.

The final chapter elapses as vignettes over several billion years as the ascended humans leave Earth and create entire worlds of their own before eventually succumbing to the ennui of immortality and self terminating, leaving Peter and Whiteside. After a lengthy hibernation, Peter finds Whiteside returned to his original human form, trying to build up his reversion the same way that he did his scheme to elevate himself and his cabal through Vere Durqa. He guides Peter through his nascent world, claiming that he’s spent his time becoming an artist as they pass a steady stream of laborers until they reach Whiteside’s project, a gigantic sculpture being carved out of a hillside by slave labor.

When he was introduced, Whiteside was driven by the idea that his anxiety disorder was holding him back and thus that his life’s work of freeing himself from the human body would elevate him into something more. He even spared Peter and brought him along into the cabal for the sole, narcissistic reason that if Peter struggled with anxiety, he must think exactly like himself. What Ward and Sheean suggest about technology, godhood, and really any manifestation of power through is that it does not change anyone’s fundamental nature.

Whiteside wanted power and he wanted to be worshipped for it. His decision to bring along a group, and ultimately the majority of the human race, with him was driven by the fact that he could achieve nothing without external, subservient validation. All Whiteside understands is domination and submission, and so with no one looking, he reverts to his former self and creates the most basic colonialist fantasy to soothe himself.

Peter for his part is in some ways a foil for Whiteside, specifically in how they view their anxiety in the wider context of their lives, but he remains a cypher for much of the story, they eyes through which we see the story and not much more. There’s a missed opportunity for him to have been a more active presence in the story and develop a more robust alternative to Whiteside’s hubris and persecution complex, but in a story that’s far more conceptual and philosophical than human drama, it isn’t a deal breaker.

Ancestor’s primary virtue is the artwork, which Ward and Sheean produce in a deeply collaborative and unique way that they detail in a whimsical supplement following the main story. The overall aesthetic of the comic communicates a frequently dissonant blend of intimacy and detachment by capturing emotions and gestures in minute detail without elaborating on them.

We see snippets of the vibrant humanity of the characters, but the moments remain slippery as the story marches on, leaving behind conversations and character beats that most contemporary comics would hang their hats on. Ward and Sheean are meticulous and subtle artists, seeding the entire story with details that reward multiple readings, especially the sequence in which Whiteside retires to his Service-run chair that treats his anxiety.

As the headrest on the chair inflates and Whiteside’s mood alters, the size of his head reflected in the avatar alters accordingly, beginning cartoonishly large compared to his body and narrowing to a sliver as the inflated pillow begins to envelop the real Whiteside’s field of view. It’s a dynamic that repeats itself in his final confrontation with Peter in the gigantic head being carved in the background, changing moods along with Whiteside until it collapses with his anger at Peter’s rejection.

In a sense, Ancestor functions very well as a meditation of the basic nature of Island as a publishing  experiment. Freedom and power don’t fundamentally alter the artist or their work, it amplifies their natural tendencies and in some cases, reveals the fundamental truth of their identity as an artist.