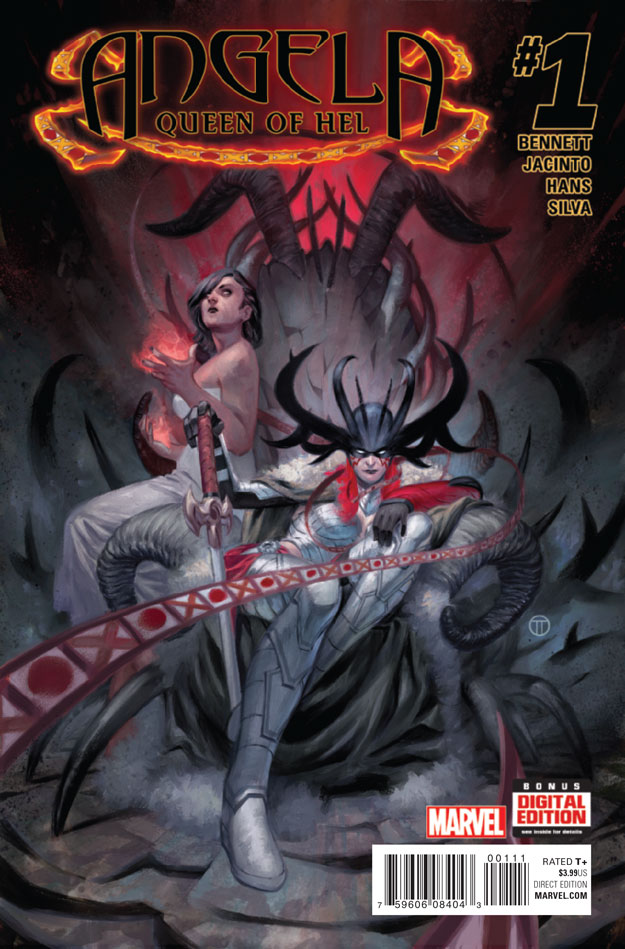 Y’all, Sera called Beyonce ‘Queen.’ That is enough to win me over.

Sera takes us on a trip down memory lane as she begins to uncover Angela’s ascent (descent?) to being the Queen of Hel. Angela is dedicated to protecting Sera, defying Heven’s caste system to stay with her. However, Sera somehow becomes trapped in Hel, leading Angela to dive into a labyrinth to find her. The end of the issue is quite the surprise, leaving me wondering about the threads being woven in the story and how they will come together.

Marguerite Bennett crafts some excellent dual dynamics through this issue. Angela and Sera are two women who are distinct from each other, but not in a way that creates conflict. Even the story parallels two important backdrops: Angela defending Sera, but also her desperate search through Hel for Sera. Using Sera as a framing device was genius because she adds a sprightly element to some rather somber circumstances.

Kim Jacinto, Israel Silva, and Stephanie Hans make wonderful work through art that mirrors the two major plots of the issue. Angela warding off the forces of Heven for Sera is done through very dreamlike, wispy colors. On the other hand, Angela’s search for Sera has a sharp ruggedness to it, conveying the emotional circumstances of Angela’s journey.

I loved the two parts of the story altogether, but I did have to go back and make sure I was grasping the time and setting fully. I also miss Sera’s more full-figured body. Initially I couldn’t tell, but by the end of the issue it seemed as though she was thinner. Sera as a bigger woman was a great touch when the series launched before Secret Wars, so I hope the art goes back to showing her that way. We need more characters with diverse bodies, and to have Sera as part of a Marvel series was a big step.

The overt queerness of this issue was easily my favorite thing about it. In this All-New, All-Different era, it’s good to see that creators are bringing a bit more representation with them. Angela and Sera’s kisses in the issue were tender and sincere. Angela’s affection toward Sera also fit in the context of the story, as she was beginning to convey emotion in only a way that Angela could. I hope to see more of this as the series progresses, and with Marguerite Bennett at the helm I know Angela will deliver.

All in all, this was a great start to another All-New, All-Different series. I’m excited to see more of Angela, but also more of this era for Marvel. In what I’ve read so far, they’ve made good on expanding representation and using characters who haven’t had a spotlight in a while. Angela is a great jumping on point for anyone interested in representation, diversity, and women with swords who will quite literally fight the Hevens.