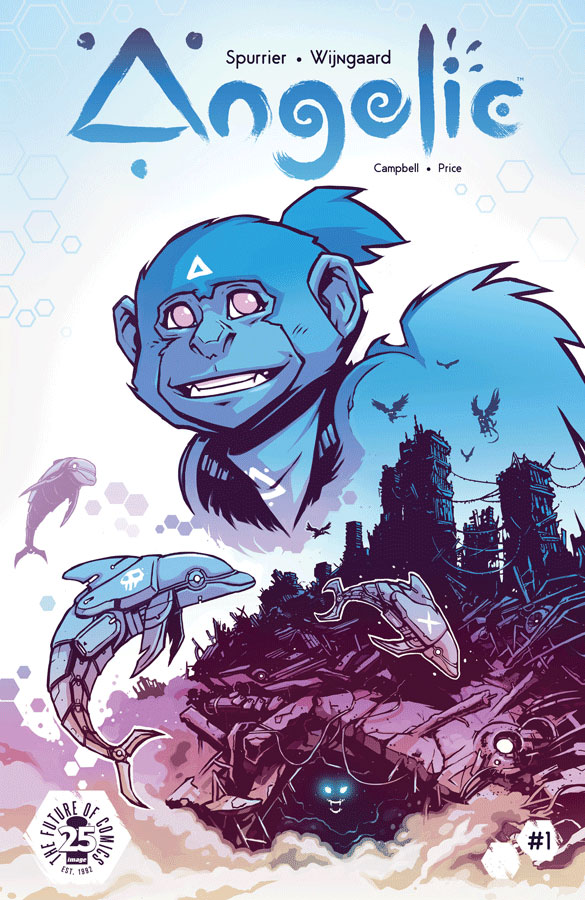 Angelic #1 is the highly-anticipated science fiction/fantasy comic from Si Spurrier, acclaimed creator of The Spire, and artist Caspar Wijngaard, who previously worked on Limbo. I loved The Spire and appreciate Spurrier’s work on recent Marvel titles, and I hoped that this new title would be groundbreaking, strange, and beautiful. Unfortunately, this issue did not deliver, and instead is a confused mess of references, ideas, and overused themes that do not come together.

The first glaring issue with this book is not one that most general comics readers might consider: the rating. This is solicited as an all-ages book, but it is most definitely not. The initial premise seems fine, but the book itself delves into serious themes, including forced marriages, sexual assault, and forced female mutilation. This is not an inspiring tale of a young woman (girl-monk) making her own way in the world, alongside some fun animals, as the solicitation implies. These heavy themes are combined with a book that feels like it was created for younger readers, and the overall tone of the book is fairly juvenile. This is a comic that is not appropriate for an all-ages rating, but also not “adult” enough to appeal to an older reading group, which makes the different elements of the story feel disjointed and forced. This is a book that tries to exist in two worlds, and it suffers from not choosing one path or the other.

On a positive note, this is a gorgeous work of sequential art. Caspar Wijngaard has an amazing presence on the page, and every panel is incredibly detailed and thoughtful. The cyber-animals are believably designed, and each animal has distinct features and movements. The color story is unbelievably gorgeous. The pastels are create a pleasant dissonance from the cybernetic, dystopian theme that is intriguing and fun. Jim Campbell is masterful on the lettering, as always. There was a lot to work with, considering the developed “slang”, the heavy dialogue, and the lettering styles for different creatures, but he brings it all together. The design is top notch as well, with credit to Emma Price. Price brings in futuristic themes that highlight the positive aspects of the book. The backmatter was a little difficult to read, because the font included a small capital “N” that threw off my eye, but it was an interesting stylistic choice, nonetheless.

If I saw this book on the rack, with no knowledge of the premise, I would buy it. Unfortunately, that’s the real issue: the art in this book is so disconnected from the tired, strange themes that it feels like two completely different projects.

The storycraft of this book left so much to be desired. While the initial premise of a cyber-dystopian world inhabited by flying monkeys sounds interesting, it is ultimately misleading. What we have here is a tired theme of a young “girl-monk” who wants to escape the confines of societal expectation and follow her dreams. We have a young girl who wants to understand the world around her, but is punished for asking too many questions. While those themes sound acceptable, especially for an all-ages book, they are also convoluted and badly-handled within the plot.

Qora, the young girl-monk in question, is threatened with an arranged marriage to the chief-figure of her family. She faces intense fear at the hands of her pseudo-religious cult race, because the punishment she faces is ritualistic impregnation. Her leader says “I will be there to witness the moment you learn your place”, referring to the alter-peace and the forced mating ritual. She faces the inevitable possibility of having her wings ripped off and thrown into the toxic wasteland that surrounds their roost. All this, as a ham-fisted metaphor for her loss of agency.

This falls into a category of “easy edgy” storytelling that is so prevalent in comics today. It might seem hard to deal with, difficult to process- because it is. Of course it is. As a woman reading this, I have read it a thousand times. I grew up on it. It infects most of the literature designed “for young women”. Young girls don’t need another story about being oppressed and afraid. We live it every day. We don’t need to see another rape/power fantasy played out as an origin story for overcoming hardship. Women are strong. Let them be strong, independent, and autonomous without the threat of sexual violence.

This theme is not resolved. In fact, Qora encounters several more instances of questionable authority over her autonomy and agency. A fazecat attacks her with pleas of “touch me, don’t ignore me”. Cyber-dolphins chase her and apologize for their behavior: “we cannot restrain our feverish fancies”. She encounters an enemy who speaks down to her, calls her “honey”, comments on her body. Overall, these themes seem almost accidental. As Spurrier clarifies in his backmatter essay, this is supposed to be a story that speaks to racism and humanity. I wish he had written that book. This book is not a fun sci-fi romp through a dystopic wasteland, complete with some fun new takes on futuristic animals. It is the beginning of another young woman’s story, bound to a society who values her only as a sexual object, for manual labor. Whatever happens after this is already stained by this clunky, badly-handled beginning.

The official solicitation for this issue reads:

WINGED MONKEYS! TECHNO-DOLPHINS! QUANTUM ALLEYCATS!
– Humanity’s long gone. Its memory lingers only as misunderstood rituals among mankind’s leftovers: the genetically modified animals they used and abused for eons.
– But for one young flying monkey, QORA, the routines are unbearable. All she wants is to explore. Instead she’s expected to settle down, to become a mother… to lose her wings.
– Eisner nominee SIMON SPURRIER (The Spire, CRY HAVOC, X-Men Legacy) and rising-star CASPAR WIJNGAARD (LIMBO, Dark Souls, Assassin’s Creed) present your new bittersweet adventure obsession: teenage rebellion and animal antics amidst the ruins of civilization!
– Think WALL-E by way of Watership Down. Fly, my pretties!

This solicitation, while intriguing at first glance, foretells many of the issues revealed in this introductory issue. This comic feels like a smattering of references and nods to other works. It feels disjointed, confused, and incomplete. The themes don’t mesh and the direction is unclear. It truly is a nod to Wall-E, and Watership Down, and The Wizard of Oz. It includes so many ideas from other works of fantasy and science fiction. It definitely has a lot of strange animals, and strange ideas to match. However, strange does not always mean good. This book suffers because the focus is on being weird, and fitting in moments that carry easy shock value, instead of being a complete, well-crafted story.

Overall, this book feels like it has no clear purpose or objective. Sometimes it feels like a commentary on race, sometimes the themes of sexual violence and loss of agency for women overtake any direction the plot may have had. It is an all-ages book in execution, as far as the art and script, but the themes are darker and more violent. The different “reveals” seem disjointed and directionless.

The issue ends on that note. It is disheartening to dislike this book, because I had such high hopes and I generally enjoy the creative team in other capacities. This book is beautiful, and it could have been groundbreaking, but the lack of cohesion and the heavy-handed smattering of themes of sexual assault throw the book off from its incredible potential.

There is no telling what will come in Angelic #2, and not in a way that conveys suspense or intrigue, but confusion and disinterest.