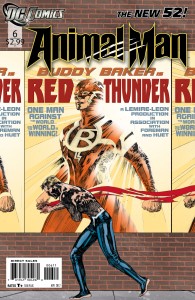 Prior to the New 52, I didn’t know there was an Animal Man and I had absolutely no intention of reading this series. Word quickly got out that Lemire and Foreman were up to some crazy things, so I jumped on board and I have been extremely happy that I did. The series as a whole has been strong and very unique and issue #6 is one of the most original comics I have read in 2012. When I started reading this issue, I had absolutely no idea what the hell was going on. Issue #5 ended in a pretty intense chase and now I’m reading about some film Buddy was in years ago? What’s going on here? I’ll tell you what is going on: some of the best storytelling in comics. The situation in Animal Man, the real heart of the title, is perfectly examined in the story within the story and I am shocked at how well Lemire pulls this off. This is no dig at Lemire, he is an excellent writer, but this is no simple feat. Lemire manages to keep the overall story of the series going forward while explaining a huge issue that is plaguing Buddy and his family….in a completely separate tale. As well written as it is, this is not an issue for new readers to jump in with. If you are going to try Animal Man, jump back to #1 and read the whole adventure so far, as the true impact of issue #6 lies in the story that has come before it.

On the art front, I applaud DC editorial or whomever made the decision to bring in different artist for the the ‘film’ portion of the issue. Foreman’s art has been very distinctive during his run on Animal Man, and having him pencil the story within the story would have made it extremely confusing. John Paul Leon’s art is not perfect, but is consistent throughout the issue. He does a good job pencilling Buddy to be recognizable as the hero we know and his style compliments this story well. The final pages by Foreman rip readers right back into the horror that Buddy and his family are facing and immediately I found myself back in the stomach churning war against the Rot.

Lemire and company definitely took a gamble with this issue, but they executed the issue well and it paid off for them. I can’t wait to read #7.

Pros: A huge change of pace, but so masterfully written that it fit in with the current storyline perfectly.

Cons: The art for the majority of the issue doesn’t have the impact Foreman’s has had.